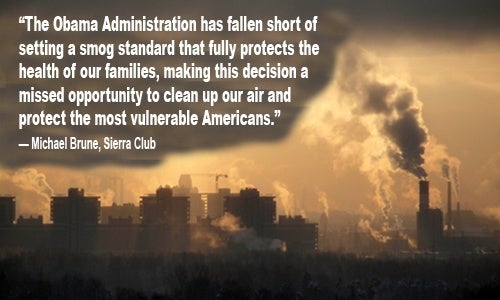 Today, the Obama Administration will unveil an update to the National Ambient Air Quality Standards (NAAQS) for smog pollution—or ground level ozone—and set the level at 70 parts per billion (ppb). The standard was last updated in 2008 when the Bush Administration rejected the recommendations of expert scientists and medical health professionals, who warned that the now current 75 ppb was insufficient to protect public health and would leave too many Americans in harm’s way.

According to the American Lung Association, inhaling smog pollution is like getting a sunburn on your lungs and often results in immediate breathing trouble. Long-term exposure to smog pollution is linked to chronic respiratory diseases like asthma, reproductive and developmental disorders and even premature death. 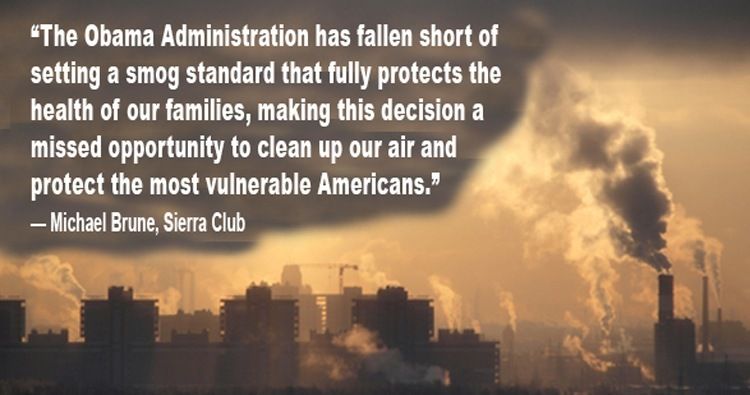 The Obama Administration has fallen short of setting a smog standard that fully protects the health of our families, making this decision a missed opportunity to clean up our air and protect the most vulnerable Americans. Lowering the smog standard from 75 to 70 ppb is a modest step in the right direction, but it doesn’t go far enough to protect the millions of Americans living in communities with dangerously high levels of smog pollution.

Over the past seven years, medical scientists have been clear that any standard above 60 parts per billion (ppb) puts our communities at risk and is especially dangerous to children, seniors and people with respiratory illnesses.

Insufficient clean air protections have disproportionately severe impacts on low income communities and communities of color, who are more likely to live closer to sources of pollution and roadways, have lower access to medical resources and health insurance and frequently have higher rates of asthma, emergency room visits and premature deaths linked to air pollution.

Moving forward, Sierra Club will continue fighting for stronger smog pollution protections and will use every tool in our belt to hold polluters accountable for the toxic emissions they dump on our communities, while continuing to push for stronger clean air protections on the local and federal levels.