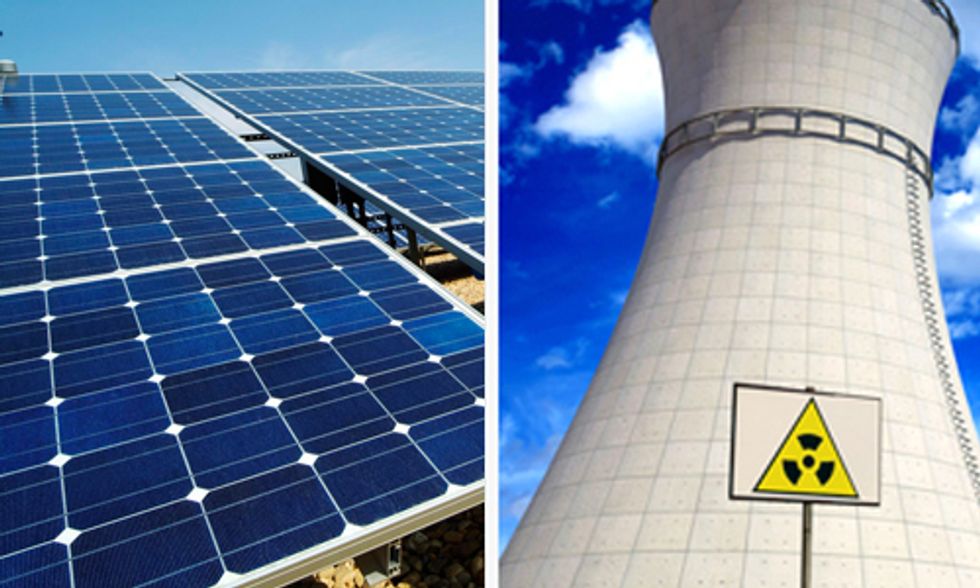 So the "all the above" energy strategy now deems we dump another $6.5 billion in bogus loan guarantees down the atomic drain. Energy Secretary Ernest Moniz has announced finalization of hotly contested taxpayer handouts for the two Vogtle reactors being built in Georgia. Another $1.8 billion waits to be pulled out of your pocket and poured down the radioactive sink hole.

While Fukushima burns and solar soars, our taxpayer money is being pitched at a failed 20th century technology currently distinguished by its non-stop outflow of lethal radiation into the Pacific Ocean.

The money is to pump up a pair of radioactive white elephants that Wall Street won't touch. Georgia state "regulators" are strong-arming ratepayers into the footing the bill before the reactors ever move a single electron—which they likely never will.

Sibling reactors being built in Finland and France are already billions over budget and years behind schedule. New ones proposed in Great Britain flirt with price guarantees far above currently available renewables.

The Vogtle project makes no fiscal sense … except for the scam artists that will feed off them for years to come.

Substandard concrete, unspecified rebar steel, major labor scandals, non-existent quality control … all the stuff that's defined this industry since the Shippingport reactor started construction outside Pittsburgh some six decades ago is with us yet again.

It would be nice to say this is merely $6.5 billion wasted. But that's the tip of the iceberg. Long Island's Shoreham and New Hampshire's Seabrook came in at 5-10 times their original cost estimates.

Shoreham never made it to commercial operation. Neither did Seabrook Unit Two.

Should Vogtle, for which these loans are designated, beat the odds and actually go on line in the years to come, it will multiply its sunk cost by irradiating the countryside and creating radioactive waste nobody can handle.

Nor can it get private insurance to shield future victims and the taxpaying public from the inevitable disaster. The next commercial reactor to explode (joining the five that already have) will do damage in the trillions.

Its owners will not be liable, and the people making this decision will never go to prison.

But many along the way will pocket major fortunes from substandard construction, corner-cutting "safety" scams, black market parts purchasing, mafia-run hiring operations and the usual greasing of radioactive palms that defines all reactor construction projects.

THEN we can dent in our climate crisis.

THAT's where the jobs are.

THERE would be an all-the-above energy strategy that actually makes sense.

Harvey Wasserman edits www.nukefree.org, where petitions calling for the repeal of Japan’s State Secrets Act and a global takeover at Fukushima are linked. He is author of SOLARTOPIA!Our Green-Powered Earth.