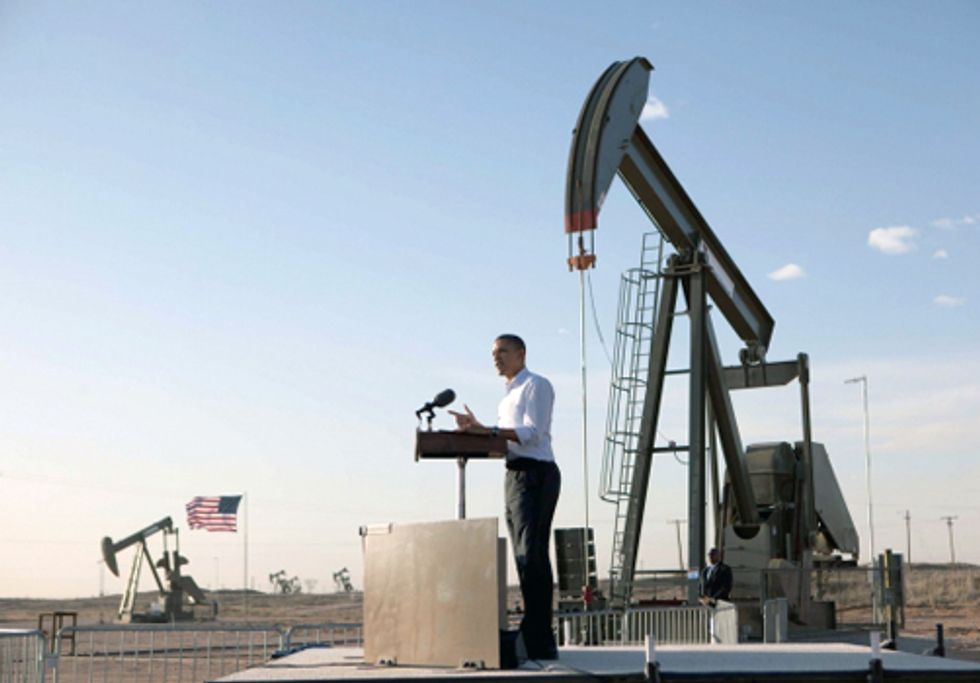 Barack Obama paid his first-ever presidential visit to Oklahoma this past week to make a speech announcing that his administration would "fast-track" a TransCanada pipeline from Cushing, OK, to the Gulf Coast. Although he said the purpose was to reduce an oil "glut" in the Midwest, it's no secret this is the southern portion of the Keystone XL pipeline that TransCanada wants to build so it can transport tar-sands oil to Gulf refineries.

The president also touted  his "all of the above" energy strategy, leading off with statistics that should have been enough to make the American Petroleum Institute swoon: millions of acres opened for gas and oil exploration, 75 percent of our potential offshore resources opened to drilling, quadruple the number of operating rigs in the U.S.—"enough new oil and gas pipeline to encircle the Earth."

Spring is in the air—but has the president really fallen madly in love with dirty energy? As usual, the answer is complicated.

From a certain perspective, it can be easy to understand why Obama is so eager to take credit for the increase in domestic oil and gas drilling. Gas prices are going up, people are hurting, and a Greek chorus of Republican candidates, politicians and pundits is doing everything it can to pin the blame on him. That's neither fair nor accurate, but fair and accurate aren't the way the game is played. Politics and reality parted ways long ago.

The president, though, is supposed to lead. At several times, both as a candidate and as president, Obama has been able to transcend partisan bickering and gamesmanship and unite Americans around a higher purpose. Whether it was his race relations speech in Philadelphia, his moving remarks after the shooting of Congresswoman Giffords and 18 others in Arizona, or even his more recent proposal last fall of a commonsense jobs package, the president has shown a unique gift for capturing what’s important, for showing that Americans of all political persuasions share common values and for inspiring people to work together to solve complex problems. On his best days, the president can do this better than anyone in public life. But at the moment, when it comes to oil drilling and gas prices, it feels like we've got more of a politician than a leader.

Earlier this year, the president said that his administration was going to "double down" on clean energy, and in Oklahoma he did include some lines on how wind, solar and efficiency are part of "all of the above." But what's the rest of that plan? What does "doubling down" really mean? What's the goal? How will we get there? Recently, most of the emphasis has been on Obama's policies in support of developing dirty energy—oil in the Arctic (and the Gulf), coal in the northern Plains and natural gas in the Northeast, at the expense of clean energy solutions that will actually get us out of this mess. (One of the administration's biggest energy achievements—doubling fuel economy standards to 54.5 miles per gallon—received just a sentence in his Oklahoma speech.)

As a strategy, "all of the above" has a fatal flaw, and it's encapsulated in something else President Obama said in Oklahoma: "As long as I'm president, we're going to keep on encouraging oil development and infrastructure, and we're going to do it in a way that protects the health and safety of the American people."

Again, that's politics, not reality. In the real world, anything we do that encourages and prolongs our national addiction to fossil fuels comes at a cost to the health and safety of the American people. The longer we go on doing it, the longer we'll pay that price. And we won't stop paying until the day we no longer need fossil fuels.

No one expects that day to come during President Obama's presidency. What we can't afford, though, is to see it pushed even further into the future on his watch. If President Obama is going to boast about drilling "all over the place," then he also needs to show us that he understands that one day the drilling must stop—and the sooner, the better. The best way to do that? By putting some meat on the bones of his support for clean, renewable energy. The fossil fuel industries and their supporters won't thank him for it, but they've never thanked him for anything—including boosting domestic oil production during every year of his presidency.

Bottom line: If President Obama is really committed to more drilling, mining or fracking, then he had better deliver an even stronger commitment to the clean, renewable energy resources that will put fossil fuels behind us once and for all. That would be leadership. Declaring triumphantly "we are drilling all over the place" a week after reminding us that "we can't drill our way to lower gas prices"? That's not strong leadership. It's not even good politics.