Obama: We Must Create a 'World That is Worthy of Our Children' 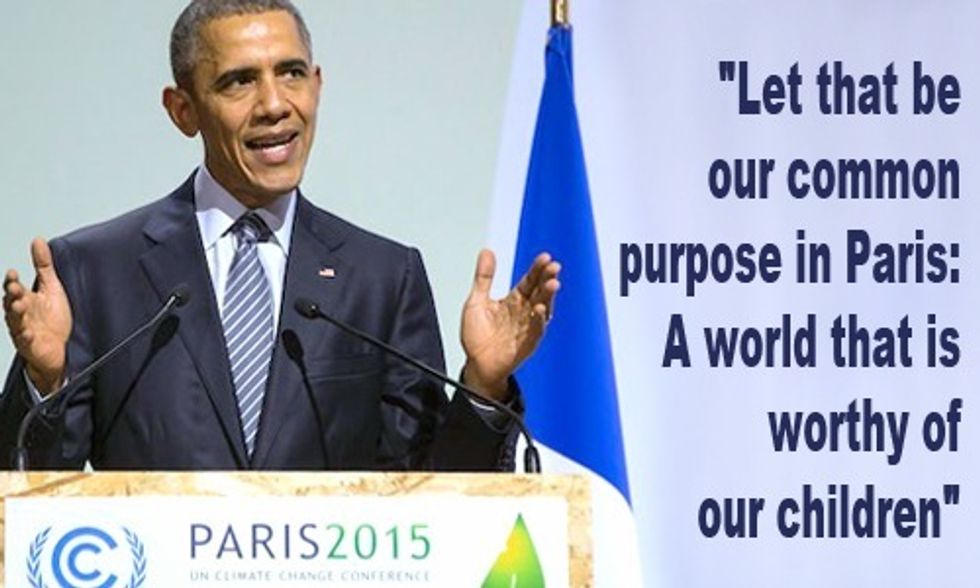 Today, President Obama joined more than 150 world leaders to kick off the COP21 UN Climate Summit in Paris. The goal of the two week conference is to finalize a binding agreement that will reduce global carbon emissions to limit global warming to 2C or 3.6F.

The talks opened with a moment of silence for victims of the Nov. 13 terror attacks in Paris.

"A political moment like this may not come again," U.N. Secretary-General Ban Ki-moon said in his opening remarks. "We have never faced such a test. But neither have we encountered such great opportunity."

President Obama said we need to deliver a meaningful deal because the "next generation is watching."

"Accepting this challenge will not reward us with moments of victory that are clear or quick," he said. "Our progress will be measured differently—in the suffering that is averted, and a planet that's preserved ... but the knowledge that the next generation will be better off for what we do here—can we imagine a more worthy reward than that? Passing that on to our children and our grandchildren, so that when they look back and they see what we did here in Paris, they can take pride in our achievement. Let that be the common purpose here in Paris. A world that is worthy of our children."

"Let that be our common purpose in Paris: A world that is worthy of our children" —@POTUS #ParisClimateConference https://t.co/5w2hTP5Cja
— The White House (@The White House)1448885408.0

“This morning, President Obama made the case that all the incredible momentum that we have seen in recent months can and should be transformed into a strong, significant agreement among nations to act in Paris and beyond," Sierra Club Executive Director Michael Brune said.

"Clean energy is more affordable and more accessible than ever before. More than 160 countries are at the table already with commitments to slash emissions. Record numbers of people around the world have taken to the streets calling for action—and their calls are being echoed in corporate boardrooms nationwide. Now, it’s time to make it count and fight for an agreement that puts us on a path to tackle the worst effects of the climate crisis, protect the most vulnerable communities, and grow a just, equitable clean energy economy.”

350.org Executive Director May Boeve agrees. "President Obama has lifted up climate change as the great moral issue of our time. Now, he must deliver. The science is clear: we must end the use of fossil fuels and fully transition to 100% renewable energy by 2050," she said. "Here in Paris, politicians must agree on that North Star and chart a clear course to get there. The hundreds of thousands who took to the streets over the weekend for the Global Climate March expect nothing less."

"President Obama’s words today made clear that communities around the world can’t wait any longer for real action on climate," commented Greenpeace Executive Director Annie Leonard. "His speech showed that the political leaders and diplomats gathered in Paris need to deliver an ambitious agreement to protect those least responsible yet most affected by climate change.

“As the world’s second largest emitter and the biggest economy, the U.S. has a key role as a leader in international climate negotiations. That leadership entails a huge responsibility to  those most affected by the negative impacts of climate change, not only in America but all over the world.”

Twenty participating countries—including China, India, the U.S., Indonesia and Brazil—will work to double its clean energy research and development investment over the next five years. All partner countries together represent 75 percent of the world’s CO2 emissions from electricity, and more than 80 percent of the world’s clean energy R&D investment.

"We know that large scale penetration of clean energy technologies will require that smart investment by governments is followed by smart private-sector investments," Paul Bodnar, National Security Council's senior director for Energy and Climate Change, and Dave Turk, deputy assistant secretary for International Climate and Technology at the U.S. Department of Energy, said in a blog post.

"That is why Mission Innovation is complemented by a separate private sector-led effort that has pledged to invest extraordinary levels of private capital in clean energy, focusing on early-stage innovations. This parallel initiative—spearheaded by Bill Gates—includes a coalition of over 28 significant private capital investors from 10 countries, and will be called Breakthrough Energy Coalition."

“The offer of billions of dollars for research into clean renewable energy is a welcome addition to an energy sector that is already making huge strides," Kaiser said. "This could help deliver the great prize—100% renewable for everyone by 2050.  The President told the summit he means business this time. If the new cash is ploughed into the genuine clean high-technology renewable industries that are already delivering, we’ll know he means it.”

With the huge sums being talked about, there has to be some democratic accountability as to how it’s spent. For example it mustn’t go towards so-called geo-engineering—short-term quick-fixes that would store up long-term danger. We don’t yet know who will decide how the cash is distributed, but the people who have most to lose from climate change should certainly have a voice at the table.”