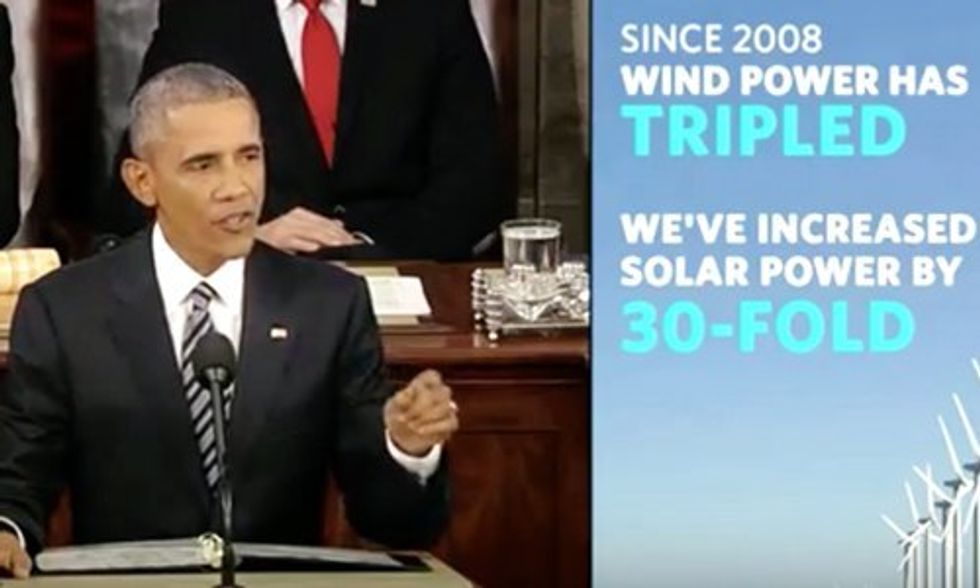 In his final State of the Union address, President Obama made climate change one of the major themes of the evening, ridiculing those who would deny that climate change is a problem—and one that can be addressed through curbing greenhouse gas emissions from human activities.

“Look, if anybody still wants to dispute the science around climate change, have at it,” the president said in his prepared remarks. “You’ll be pretty lonely, because you’ll be debating our military, most of America’s business leaders, the majority of the American people, almost the entire scientific community and 200 nations around the world who agree it’s a problem and intend to solve it.”

The president drew parallels between the difficulties of slashing climate change and one of the most famous scientific and engineering challenges in American history, the race to put a man on the moon.

“Sixty years ago when the Russians beat us into space, we did not deny Sputnik was up there,” he said, to laughter from the gathered members of Congress and other federal officials. “We did not argue about the science or shrink our research and development budget. We built a space program almost overnight and 12 years later we were walking on the moon.”

And while he bragged about today's low gasoline prices, he also warned that a fundamental shift away from fossil fuels is needed—and fast.

“Now we’ve got to accelerate the transition away from dirty energy,” President Obama urged. “Rather than subsidize the past, we should invest in the future—especially in communities that rely on fossil fuels. That’s why I’m going to push to change the way we manage our oil and coal resources, so that they better reflect the costs they impose on taxpayers and our planet. That way, we put money back into those communities and put tens of thousands of Americans to work building a 21st century transportation system.”

Unlike years past, the president made no mention of the shale drilling rush that swept the U.S. during his time in office, nor of the fracking that made shale drilling possible. And he made no claims about so-called “clean coal.” This year, he focused instead on the achievements of the wind and solar industry.

“Seven years ago, we made the single biggest investment in clean energy in our history,” he said. “Here are the results. In fields from Iowa to Texas, wind power is now cheaper than dirtier, conventional power. On rooftops from Arizona to New York, solar is saving Americans tens of millions of dollars a year on their energy bills and employs more Americans than coal—in jobs that pay better than average.”

But for all of the resounding rhetoric, the devil is always in the details when politicians are talking. And the president's soaring speech was noteworthy for its lack of specifics.

The Obama administration—both in the president's remarks and through the White House's State of the Union website—focused largely on policies that have already been enacted, rather than calling on Congress to enact new programs or announcing executive orders. And those existing policies were enacted at a time when the president was calling for an “all of the above” approach to energy—which meant a heavy continued reliance on fossil fuels.

For months, observers have noted that, while Obama seems to be increasingly aware of the perils of climate change, his administration's policies have failed to keep pace.

“So he’s doing a very good job of showing us what a climate leader sounds like,” Naomi Klein, author of This Changes Everything: Capitalism Versus the Climate, told Democracy Now! in August. “But I’m afraid we’ve got a long way to go before we see what a climate leader acts like, because there is a huge gap between what Obama is saying about this threat, about it being the greatest threat of our time and indeed this being our last window in which we can take action to prevent truly catastrophic climate change, but the measures that have been unveiled are simply inadequate.”

And while Obama's ire focused on the oil and coal industries, he failed to address the role of the natural gas industry and its methane emissions, which risk pushing the climate into runaway feedback loops—an issue so serious that scientists warn that burning gas instead of coal to generate electricity is worse for the climate than burning coal.

Even while the president spoke, methane continued to spew from a gas storage field in Southern California, a leak that has driven thousands from their homes and that environmentalist Erin Brockovich has compared to the BP oil spill for its immensity.

There's also the issue of convincing Congress to go along with a shift away from an industry that donated more than $326 million to the 113th Congress (the most recent year for which figures are available), according to Oil Change International.

“I think there are outdated regulations that need to be changed and there’s red tape that needs to be cut,” the president said, to some of the loudest applause of the evening.

His next sentence drew a far more muted response. “But after years of record corporate profits, working families won’t get more opportunity or bigger paychecks by letting big banks or big oil or hedge funds make their own rules at the expense of everyone else.”