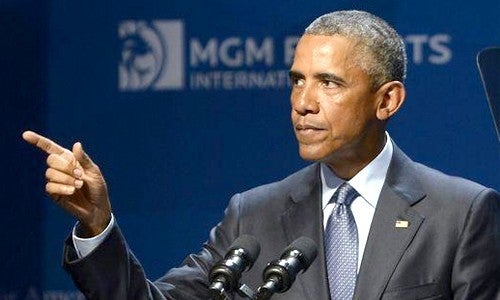 President Obama has returned from vacation and he said he feels “refreshed, renewed, recharged” and “a little feisty.” Well, that feistiness was apparent as he delivered the closing address at the 8th National Clean Energy Summit in Las Vegas, Nevada Monday. Sun-blessed Nevada is being hailed as “ground zero in the solar boom.” He slammed critics of his energy policies for “wanting to protect an outdated status quo” based on fossil fuels and warned them away from “standing in the way of the future” and his efforts to combat climate change.

He railed against U.S. political and business figures, particularly the Koch brothers, for attempting to thwart the expansion of wind and solar power, which is widely popular among the American public.

“When you start seeing massive lobbying efforts backed by fossil fuel interests, or conservative think tanks, or the Koch brothers pushing for new laws to roll back renewable energy standards, or to prevent new clean energy businesses from succeeding, that’s a problem,” Obama said, marking the first time the President has singled out the Koch brothers in a climate speech. The explosive growth of solar in the U.S. “has some big fossil fuel interests pretty nervous,” Obama noted.

And he pointed out the inconsistency of those who promote free market solutions, except when those solutions point to renewable energy. “Now, it’s one thing if you’re consistent in being free market,” said Obama. “It’s another thing when you’re free market until it’s solar that’s working and people want to buy and suddenly you’re not for it any more.”