Obama Risks the Arctic and His Voter Base 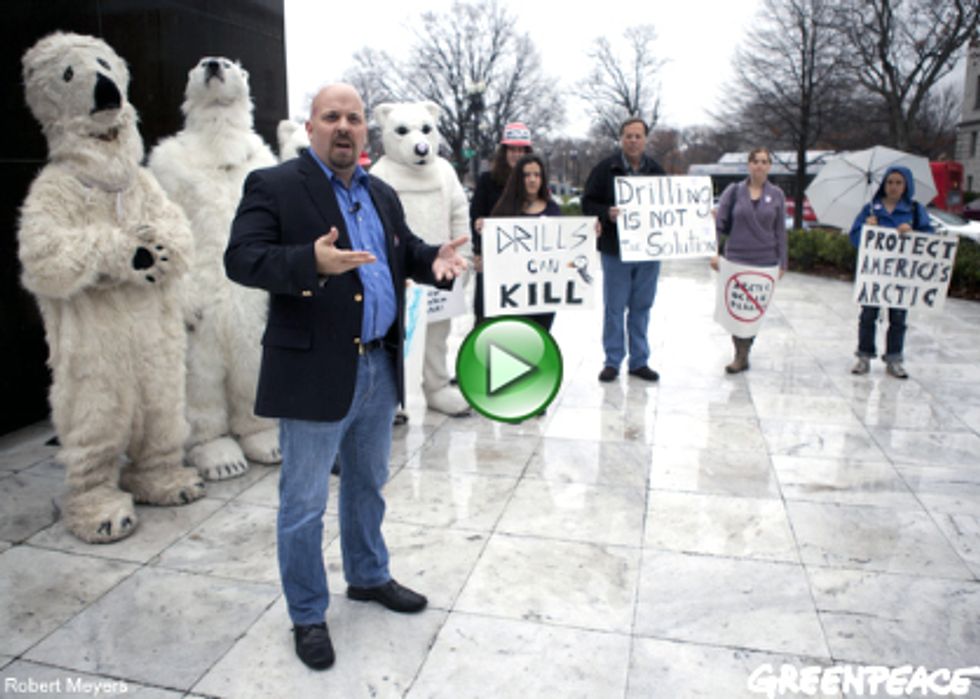 On Dec. 6, President Obama's staff held a hearing on their proposed 5 year oil leasing plan. A plan that would open up drilling in the Arctic. I was there with Cindy Shogan of Alaska Wilderness League, rallying people to urge the President to stop risking the Arctic and the support of young environmental voters.

When the BP Deepwater disaster happened, I saw firsthand the destruction that oil drilling causes on the environment.

Miles of oil-covered coastline destroyed the original beauty of the Gulf coast. Billions of dollars that people depended upon to feed their families were never earned. Oil-covered birds were suffering. Dolphins would swim near our Greenpeace ship under a sheen of oil. Around the Gulf, it was reported that when the dolphins surfaced, they would accidentally breathe in the oil, and you could hear them making a sound like coughing. The Gulf coast, still recovering from Hurricane Katrina, fell further into despair. The people’s livelihoods—from fishing to tourism—were destroyed.

Now President Obama is proposing that we open Alaska for drilling, and in doing so, he is taking two monumental risks.

First, he is risking the fragile, untouched ecosystems that are more vulnerable to an oil spill than those in the Gulf. The Arctic is home to polar bears, bowhead whales, walruses, ice seals and hundreds of species of birds. The Coast Guard calls an oil spill in the Arctic “a nightmare scenario.” The reason that it will be so difficult, if not impossible, to “clean” an Arctic oil spill is because the area is pitch black for half of the year and the water is covered with sheets of floating ice. If BP could only clean about 3 percent of the oil spilled in the Gulf, it seems unlikely that Shell and Obama, in Arctic conditions, could do any better.

The second risk the President is taking is the fact that once again, like with his initial efforts to promote the Keystone Pipeline that would have shipped Tar Sands through the U.S., he is risking the hours, passion and contributions of his supporter base, particularly young voters.

These Arctic lease sales—not to mention previous decisions he has made that enable drilling in the Beaufort Sea—are potentially disastrous. They are disastrous for our environment and for the prospects of young Americans, who vote on the environment, supporting the President come election season.

It’s time to protect the Earth’s final frontier. We need an energy revolution and it needs to start right now. President Obama can help us take a step in the right direction by making sure the five year plan doesn’t include new arctic leases.