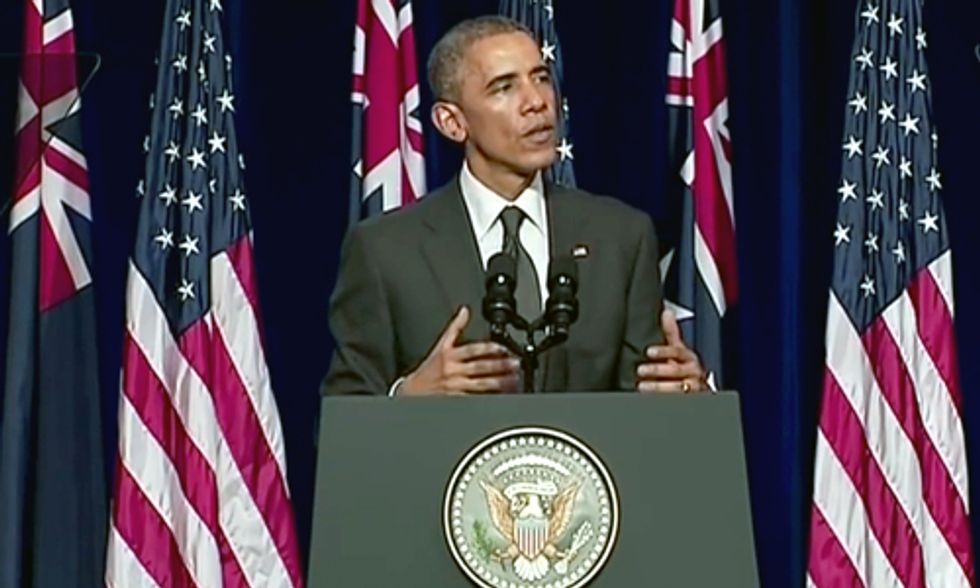 Following the announcement in Beijing last week by President Obama and Chinese President  Xi Jinping of a historical agreement between the two countries to cut carbon emissions, Obama moved on to the G20 meeting in Brisbane where he made another climate-positive announcement: he pledged on Friday that the U.S. will contribute $3 billion to the UN's Green Climate Fund. The fund was established to help developing countries address greenhouse gas pollution and climate change.

President Obama announced in Brisbane on Friday that the U.S. will be the largest contributor to the Green Climate Fund to help developing nations address climate change.

Obama's announcement opened the door for other nations to step up. It was quickly followed by a pledge of $1.5 billion from Japanese prime minister Shinzo Abe. Then last evening, Canadian Prime Minister Stephen Harper, who has dragged his feet about participation, suggested that Canada will get on board as well. The UK's David Cameron is expected to announce a $1 billion pledge later this week.

Harper's announcement comes as a particular surprise since he and Australian prime minister David Abbott jointly dissented from support of the fund when it was announced late last year. G20 meeting host country Australia is rapidly becoming the poster child for resistance to climate change action, and this weekend's conference made it clear that has not changed. Abbott opposed the new pledges, attempting to keep the issue off the meeting's formal agenda and water down the commitment language. The U.S. and other countries overrode that effort. Abbott told the world leaders at the meeting that he is "standing up for coal," while Australia's treasurer Joe Hockey said his country is focused on jobs and growth and he didn't see climate change as a problem.

These pledges should put the fund close to its $10 billion goal, and environmental groups praised the commitments.

“This week has breathed new life into global climate action," said Andrew Steer, president and CEO of the World Resources Institute. "This pledge signifies that the U.S. is serious about delivering a global climate agreement. These funds provide critical support to vulnerable communities that are unable to withstand the impacts of climate change on their own. Further, these funds can be used to support U.S. companies looking to expand low-carbon opportunities overseas."

“Make no mistake about it, momentum toward significant international action to tackle the climate crisis is quickly building," said Michael Brune, executive director of the Sierra Club. "On the heels of a historic deal with China to cut air pollution and carbon pollution while growing our clean energy economy, President Obama’s pledge to the Green Climate Fund shows that he is taking the lead in creating a path to real progress in Paris. But this commitment will do more than lay the groundwork for a strong international agreement. It will also help developing countries fund critical investments to reduce emissions and protect themselves from the devastating effects of climate disruption, helping stabilize their future while securing our own.”