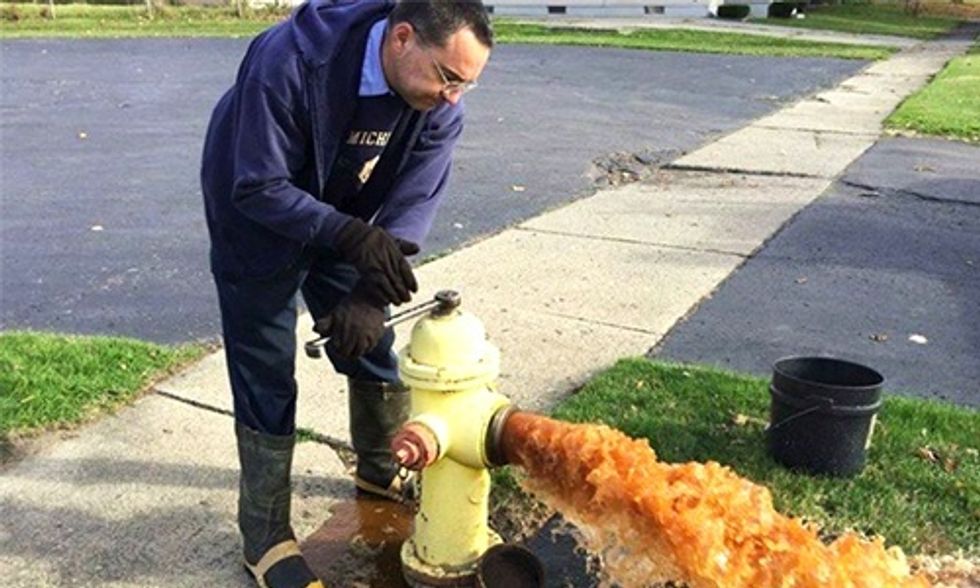 Photos of yellow and brown water, concern from health officials and even letters from Girl Scouts have helped turn a national spotlight on the water crisis plaguing the residents of Flint, Michigan. And now the White House has agreed to send federal funds to Genesee County.

On Saturday, President Barack Obama declared a state of emergency in Flint over contaminated water supplies, the Detroit Free Press reported. Such a declaration allocates up to $5 million in federal funds to the city. It also authorizes the Federal Emergency Management Agency to galvanize supplies and distribute water bottles, filters and other supplies.

Local and state-level declarations of emergency were made by Flint Mayor Karen Weaver and Michigan Gov. Rick Snyder in December 2015 and January, respectively. But the problem started in 2014, when an unelected state official switched the city's main water supply from Lake Huron to the Flint River to save money.

Research has found that the water in the Flint River is 19 times more corrosive than Lake Huron's water, causing old pipes to degrade and leach lead into the water. The city switched back to the Lake Huron supply in October 2015, but with the pipes already damaged, they continued to leach harmful metal into the water supply.

A study released in September 2015 found that the number of children and infants with above-average lead levels in their blood had more than doubled since 2014. Elevated lead levels can lead to behavioral and developmental problems in children, according to the World Health Organization.

Snyder has been criticized for mishandling the water crisis and accused of prioritizing cost savings over residents' health. Democratic presidential hopeful and U.S. Sen. Bernie Sanders called for Snyder's resignation, as did filmmaker and Flint native Michael Moore.

“This is not a mistake," Moore told the Detroit Free Press at a rally on Saturday. “Ten people have been killed here because of a political decision." Moore is referring to the 10 fatalities from recent outbreaks of Legionnaires' disease. Officials are investigating the spike in Michigan of Legionnaires' disease—a form of bacterial pneumonia typically spread through water—but they have not yet confirmed that these cases are directly connected to the contaminated water in Flint.

Moore was surrounded by hundreds of residents protesting the government's handling of the water crisis.

“There are people who are very angry here because their lives are at risk," Moore said. “They should be angry. We are all angry."

Trevor Noah on Flint Water Crisis: 'If Water Is Browner Than Me, I Don't Drink It'