Obama: ‘One of the Most Urgent Challenges of Our Time Is Climate Change’ 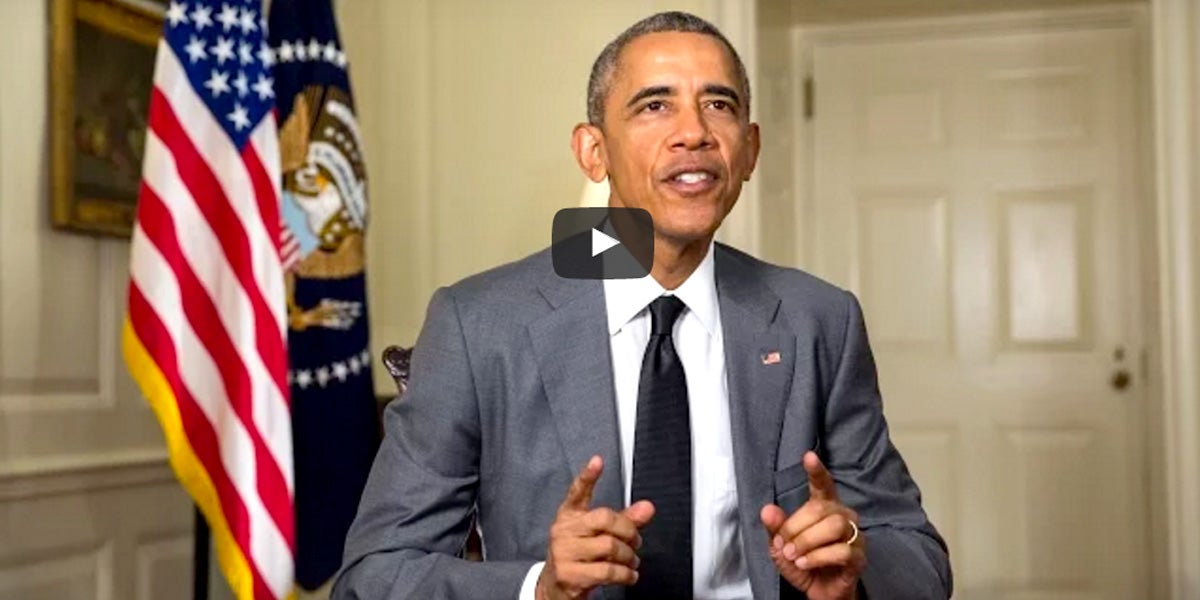 President Obama announced plans for more regulations to combat climate change in the coming months and called the issue “one of the most urgent challenges for our time.”

In a weekly address to the nation, Obama said his administration will roll out new measures, including fuel efficiency standards for heavy-duty vehicles and will work towards meeting the goal of 50 percent clean energy across North America by 2025.

Here’s the transcript of his weekly address:

Hi, everybody. One of the most urgent challenges of our time is climate change. We know that 2015 surpassed 2014 as the warmest year on record—and 2016 is on pace to be even hotter.

When I took office, I said this was something we couldn’t kick down the road any longer—that our children’s future depended on our action. So we got to work, and over the past seven-and-a-half years, we’ve made ambitious investments in clean energy, and ambitious reductions in our carbon emissions. We’ve multiplied wind power threefold. We’ve multiplied solar power more than thirtyfold. In parts of America, these clean power sources are finally cheaper than dirtier, conventional power. And carbon pollution from our energy sector is at its lowest level in 25 years, even as we’re continuing to grow our economy.

We also set standards to increase the distance our cars and light trucks can go on a gallon of gas every year through 2025. And they’re working. At a time when we’ve seen auto sales surge, manufacturers are innovating and bringing new technology to market faster than expected. Over 100 cars, SUVs, and pick-up trucks on the market today already meet our vehicles standards ahead of schedule. And we’ve seen a boom in the plug-in electric vehicle market—with more models, lower battery costs, and more than 16,000 charging stations.

But we’re not done yet. In the weeks and months ahead, we’ll release a second round of fuel efficiency standards for heavy-duty vehicles. We’ll take steps to meet the goal we set with Canada and Mexico to achieve 50 percent clean power across North America by 2025. And we’ll continue to protect our lands and waters so that our kids and grandkids can enjoy our most beautiful spaces for generations.

There’s still much more to do. But there’s no doubt that America has become a global leader in the fight against climate change. Last year, that leadership helped us bring nearly 200 nations together in Paris around the most ambitious agreement in history to save the one planet we’ve got. That’s not something to tear up—it’s something to build upon. And if we keep pushing, and leading the world in the right direction, there’s no doubt that, together, we can leave a better, cleaner, safer future for our children.

Thanks, everybody. Have a great weekend.