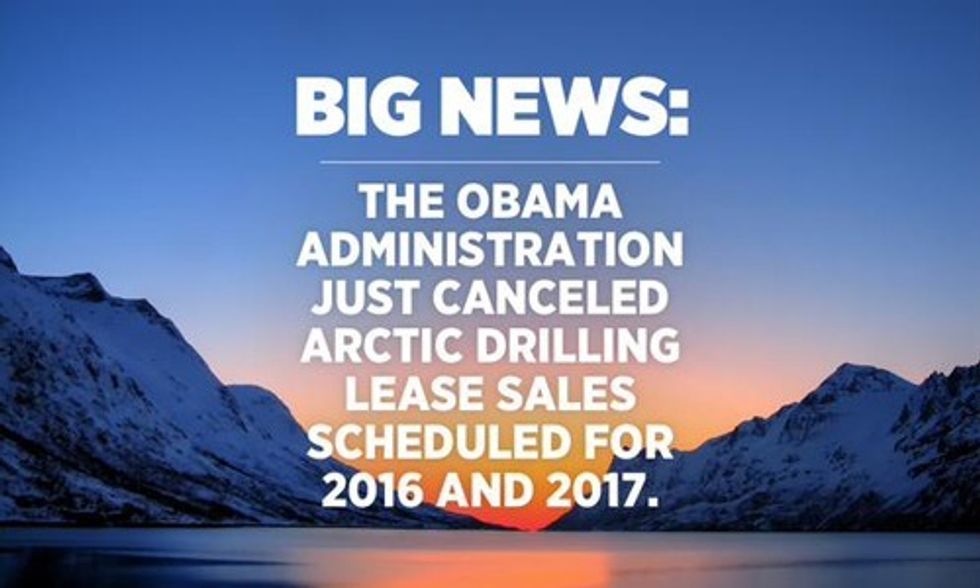 It just keeps getting better and better for the Arctic. First, Shell Oil pulled the plug on its horrific current drilling effort there two weeks ago.

Now the Obama administration has taken its first concrete steps to reduce future threats. Yesterday, it cancelled new lease sales scheduled for next year and 2017 in our Polar Bear Seas—the Chukchi and Beaufort—off the north Alaskan coast. And just said "No" to extension requests from Shell and others holding existing leases in the region.

This is big. Up to now, the federal government has treated Arctic Ocean drilling as a done deal. As recently as last May, the President tweeted: "we can't prevent oil exploration completely in region."

His administration focused on excluding some high value areas and saying drilling would be subject to high standards. It tentatively proposed to allow more leasing in the Arctic Ocean (and the Atlantic) after 2017.

But the tide has changed. Shell made a spectacle of itself, rushing to drill. Mother Nature asserted herself. Human error propagated in the harsh conditions.

Kayaktivists spotlighted Arctic drilling as a climate issue—rightly, because huge new investments in dirty fuels can't be harmonized with accelerating the shift to a clean energy future.

Shareholders demanded that Shell explain how its exploration policies squared with limiting damage from global warming. Again rightly, not least because of the likelihood that increasingly effective carbon regulation and affordable efficiency and clean fuel alternatives will "strand" fossil fuel assets, forcing companies to write them off.

And yesterday, the Obama administration is starting to actively pull our energy policy away from the Arctic Ocean. Turns out drilling there may not be inevitable. "All of the above" was always a slogan, not literally a policy: there were always some places off the table. Now we have a real shot at adding the U.S. Arctic Ocean to that list—if we don't let up.

So hurrah for Obama, props to all those who raised their voices and/or their paddles, and let's keep on keepin' on.