Obama Administration Confused about Its Own Flawed Keystone XL Process 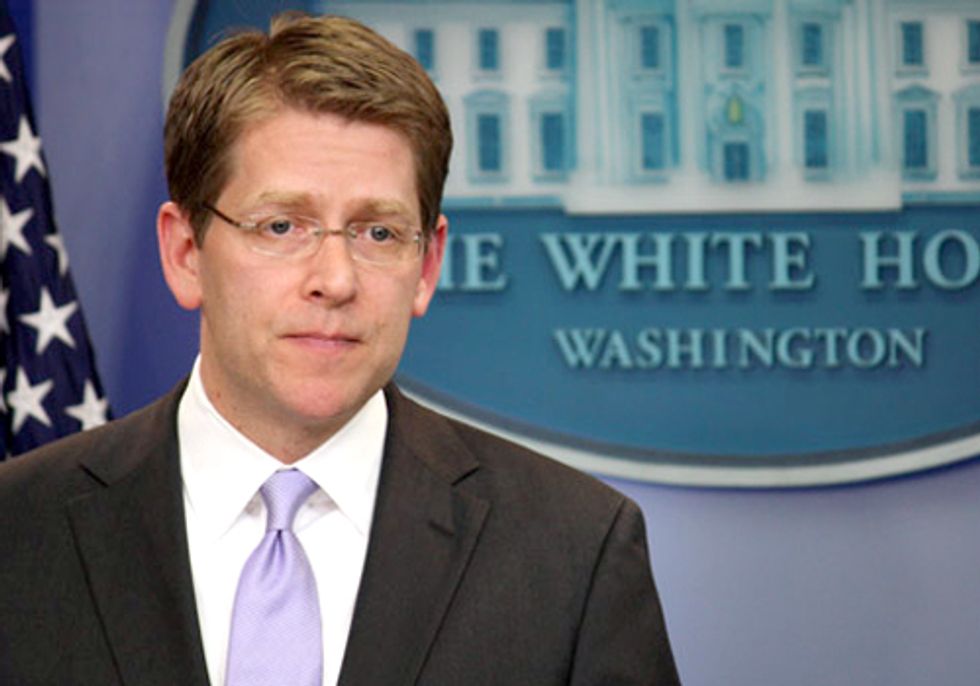 Either Press Secretary Jay Carney was confused at the June 4 daily White House briefing and misspoke, or the Obama administration has abandoned any semblance of adhering to a legal review process for the southern segment of the Keystone XL tar sands oil pipeline, stretching from Cushing, Okla. to the Gulf Coast of Texas.

As part of a response to a question about President Obama’s approach to the Keystone XL pipeline, Carney answered:

“The portion that begins at Cushing and goes to the Gulf, as you know—and maybe you were on the trip—the president has not only—the administration not only has approved the various permits that needed to be approved at the federal level, but the president has urged that that process be expedited.”

It should be news to the Army Corps of Engineers, the federal agency tasked with overseeing the permitting process for the southern segment, that President Obama has given TransCanada, the Canadian oil company backing Keystone XL, the green light on the “various permits…at the federal level” that it needs to begin construction. If true, it would definitely be news to landowners and community leaders along the path of the pipeline through Oklahoma and Texas who are fighting for a voice in the review process, let alone basic information from the Army Corps of Engineers about TransCanada’s permit applications.

By Carney’s account, the Obama administration isn’t even following the already weak and flawed process set out by the Army Corps of Engineers to consider TransCanada’s application for the southern leg of Keystone XL. Assuming he misspoke, Carney’s words nonetheless add to an alarming array of evidence that the Obama administration is paving the way for TransCanada to get a rubber stamp—and pre-judging the outcome—rather than pursuing the rigorous, science-based and transparent review that the public deserves.

Carney’s comments aside, where does the Keystone XL southern segment preview process stand?

TransCanada split the transboundary and southern legs of its Keystone XL pipeline project into two parts following President Obama’s rejection of its presidential permit in January 2012. All signs indicate that TransCanada split Keystone XL into pieces in order to get a head start on the southern leg and evade a thorough review of its environmental impacts while its reapplication for the northern leg is vetted.

Three Army Corps of Engineers district offices—in Tulsa, Okla., Ft. Worth and Galveston, Texas—are charged with reviewing TransCanada’s applications for the southern leg of Keystone XL. The Army Corps of Engineers has confirmed that TransCanada submitted its applications to the Corps district offices in Galveston and Tulsa for Nationwide Permit 12 (NWP 12) coverage on May 11, triggering a 45-day deadline by which the Corps must approve or deny the permits. The Corps can approve or reject the permits before the 45 days are over but if the agency does not respond within the 45 days, the permits are automatically approved by default, allowing TransCanada to proceed with construction.

In response to mounting media scrutiny from reporters like Elana Schor at E&E and Ramit Plushnick-Masti at the Associated Press, Corps officials recently confirmed that the 45 days will run out on June 26 for the Galveston office and on June 28 for the Tulsa office, while the Ft. Worth office is still evaluating TransCanada’s application materials for that district.

It’s become overwhelming clear that TransCanada pursued NWP 12 coverage to further evade a thorough, science-based review of its pipeline’s likely impacts—as NWP 12 allows for blanket approval of all pipeline water crossings without public review or input—and that the Army Corps is working alongside TransCanada to facilitate a rubber stamp for the southern segment pipeline permits.

Yet, to inoculate Dr. Watson’s determination that the southern segment of Keystone XL is ineligible under NWP 12, TransCanada now claims to have changed the route of its pipeline and to be proposing different techniques to deal with stream and wetland crossings. Army Corps official Vicki Dixon has said, “There would not be a public hearing or notice that would go out as far as the route goes ... it certainly appears that [TransCanada has] minimized the impacts at this point."

What TransCanada and the Corps seem to be missing is that changing the route of the southern segment a few hundred feet or using a new technique—one that hasn’t been proven environmentally safer—doesn’t reduce the cumulative environmental impacts of the pipeline.

The tweaks referenced certainly do not respond to or account for the wide range of concerns repeatedly raised by citizens and landowners, who’ve been blithely stonewalled in their requests for basic information about the application, timeline and process for the permits. While Army Corps spokespeople have informed reporters calling them up that TransCanada has changed its southern segment route, landowners and other citizens have been told they’ll have to submit Freedom of Information Act requests and have been denied meetings. If TransCanada has changed its route, shouldn’t people in its path be the first to be informed?

On a phone briefing last Thursday, David Daniel, president of Stop Tarsands Oil Pipelines and a landowner in East Texas, joined an indigenous community leader from Oklahoma, environmental experts and grassroots groups in speaking to the opaque and furtive process overseen by the Army Corps of Engineers:

“We are the most impacted and we carry the primary burden and yet we have been left with being made invisible and feeling like lab rats on our own properties. We are fed up with the tactics, we demand transparency and an end to the stonewalling.”

The public has the right to know the particulars of a process through which a pipeline that would have massive impacts on land, water, public health and our shared climate may be approved any day now. Friends of the Earth and CREDO Action have together generated more than 115,000 signatures on a petition to U.S. Environmental Protection Agency Administrator Lisa Jackson, urging her to intervene in the Corps’ handling of the southern segment to ensure a permitting process that is transparent and rigorous as required by bedrock environmental law.

As the clock ticks on TransCanada’s southern permit applications, one thing is very clear: The Obama administration’s decision on the Keystone XL pipeline will have far-ranging consequences for communities’ drinking water, public health and local economies all along its path as well as for our shared climate. The pipeline, in carrying the world’s dirtiest oil—tar sands oil—to the Gulf Coast for export, would help ignite the carbon bomb in Canada’s tar sands, further fueling climate disruption.

Carney’s statement on June 4 referred to the southern leg of Keystone XL as the “domestic” portion—which is accurate in terms of land area traversed, but misses the larger point. As the key segment of the Keystone XL pipeline, the southern leg of Keystone XL would provide the industry one of the crucial links to relieving the current glut of tar sands oil in the Midwest by piping it down to refineries and international shipping ports on the Gulf Coast for export. The project would inflate oil industry profits while threatening our heartland with costly spills, amplifying the already-debilitating air pollution in refinery communities on the Gulf Coast, and vastly drive the expansion of climate-destabilizing tar sands development and consumption.