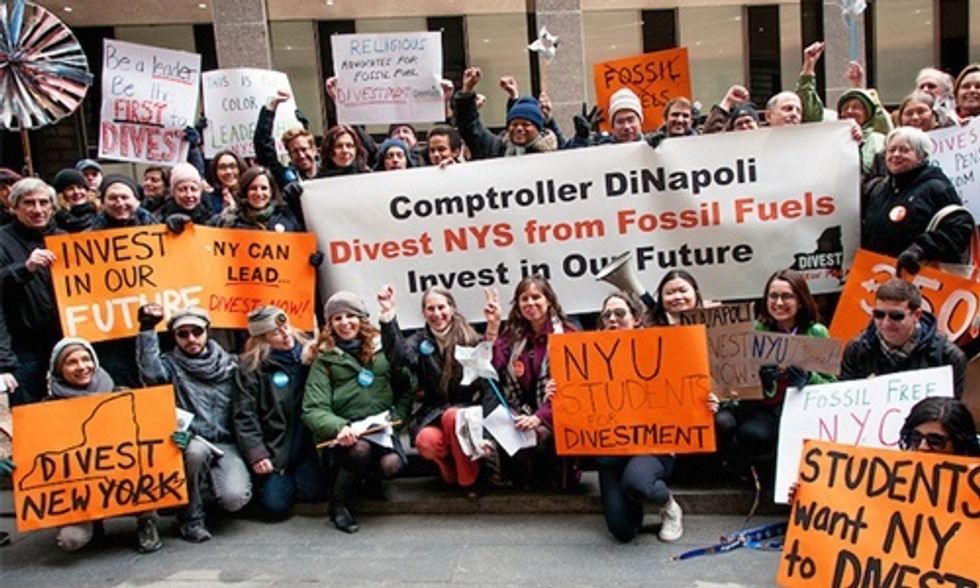 A new report from Advisor Partners revealed that in one year alone, New York City’s largest pension fund lost around $135 million from their holdings in the top 100 oil and gas companies. The Teacher’s Retirement System of the City of New York, representing more than 200,000 teachers, educators and workers, incurred a 25 percent reduction in returns of their $60 billion fund from investments in oil and gas.

Protestors call on the State of New York to divest from fossil fuels. Photo credit: Adam Welz for 350.org / Flickr

“If it’s wrong to wreck the climate, it’s wrong to profit from that wreckage—but our city’s pension funds are incurring nothing but losses by investing in fossil fuels," Mimi Bluestone, a member of the United Federation of Teachers and a campaigner with 350NYC, said. “The money lost from oil and gas investments just in the last year is equivalent to putting about 7,000 students through school for a year. It’s time for New York City to get out of the business of climate destruction.”

The findings of this report add significant momentum to activists calling for fossil fuel divestment. Organizers with 350NYC have been campaigning for the city council to divest the city’s five pension funds from all fossil fuels for over three years. During the Paris climate talks, it was announced that more than 500 institutions representing over $3.4 trillion in assets under management have committed to some level of fossil fuel divestment.

ExxonMobil and Chevron were the largest contributors to the fund’s declining performance, causing losses surpassing $39 million. In November, New York Attorney General Eric Schneiderman launched an investigation into Exxon’s climate lies after groundbreaking reports revealed that the corporation knew about climate change for decades, yet poured resources into discrediting their research and sowing doubt among the public. California Attorney General Kamala Harris has also launched an investigation.

“Oil & gas companies are volatile investments. The fact that these companies underperformed both the U.S. and broader global index by more than 25 percent confirms the riskiness of these companies,” Rahul Agrawal, CIO of Equities for Advisor Partners, said. “Portfolio managers should carefully reassess their exposure to these securities before investing in them.”

New York City Comptroller Scott Stringer and Mayor Bill De Blasio have already issued urgent calls for the city’s pension funds to divest from coal. Coal is on its way out, oil prices are plummeting and major fossil fuel companies are filing for bankruptcy, slashing jobs and cancelling projects.

On Wednesday, prominent financial and political figures, including Scott Stringer, will gather at the United Nations for the Investor Summit on Climate Risk hosted by Ceres.

“The prudence of divesting from coal is so legible it is quickly becoming the norm. Oil and gas are on a more asperous decline, making it harder for investors to see the mounting risk associated with the industry. New York City’s pension funds need to divest now, as cautious, long-term investors,” Brett Fleishman, senior analyst with 350.org, said.

“With this summit happening right in their backyard, NYC’s comptroller and pension fund managers must communicate exactly what they’re doing to incorporate ever-increasing climate risk mitigation and to protect the future of New York City’s workers.”