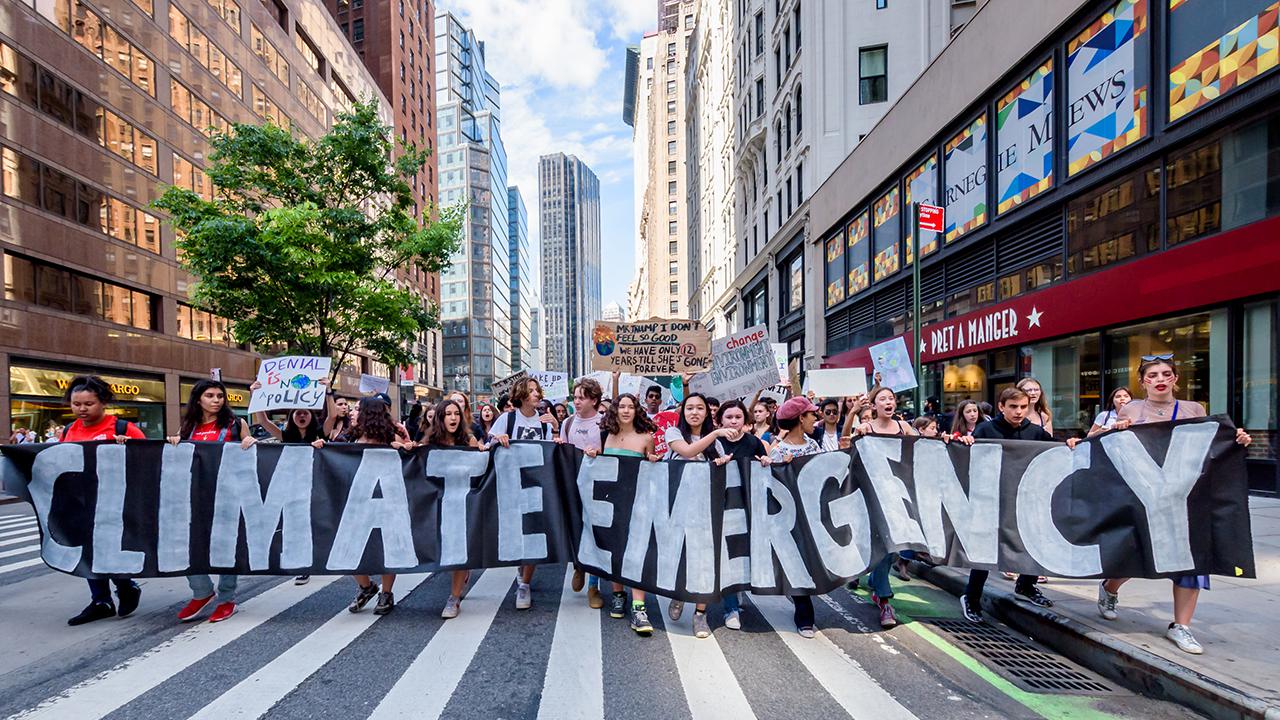 Hundreds of New York City students, young people and climate activists gathered at Columbus Circle for a rally followed by a march and die-in to Times Square to join countries around the world in the second-ever Global Climate Strike on May 24, 2019. Erik McGregor / LightRocket / Getty Images

Like many of the other cases throughout the country, this lawsuit, filed in the Supreme Court of the State of New York in the County of New York, names fossil fuel giants BP, ExxonMobil, and Royal Dutch Shell as well as the American Petroleum Institute (API), an industry trade group, as defendants.

A statement announcing the suit accuses the defendants of “systematically and intentionally deceiving New Yorkers” in violation of the city’s Consumer Protection Law. The complaint says they engaged in “deceptive trade practices” including “false and misleading greenwashing campaigns.”

“My message to Big Oil is: New York City will see you in court.”

“Climate change is very much on the mind of New Yorkers. Overwhelmed with the idea that there is nothing they can do, consumers are looking for ways to help, including by spending money on fossil fuel alternatives and rewarding companies that seem green,” Johnson explained.

“The defendants in our lawsuit have spent millions to persuade consumers that they present a clean, green choice. But they don’t,” he continued. “They say they are making meaningful investments to protect the environment. But they aren’t. They would like us to believe they are good faith partners in the drive to reduce fossil fuel consumption. And we don’t.”

Asserting that “consumers are entitled to clear, accurate information about products they may choose,” Johnson added that “we are bringing this litigation to protect that right. The defendants’ deceptive practices are squarely prohibited by New York City law and cannot be allowed to continue.”

“Fossil fuel companies are continuing to spin a tangled web of lies about the deadly products they produce and sell after decades of misleading consumers,” said Bavishi. “There’s undeniable scientific evidence that oil, gas, and coal are warming our planet and making climate disasters more frequent and more severe. We won’t be able to protect New York City from climate change unless we stop these companies from lying to New Yorkers — and that’s what we intend to do.”

Should be a slam dunk: In 2017, @NaomiOreskes & I used peer-reviewed content analysis to show ExxonMobil ads misled the public about climate change **in the @nytimes**: https://t.co/JfzGRaa9qN https://t.co/4POOU3VY05

The mayor, who has gained some international attention for his work to address the climate emergency, reiterated a point he has often made — that “our children deserve to live in a world free from climate change, and we must do everything in our power to give them hope and stop climate change in its tracks.”

“That means taking on some of the biggest polluting corporations for false advertising and greenwashing,” de Blasio added, describing the behavior as illegal. “My Earth Day message to Big Oil: See you in court.”

Richard Wiles, executive director of the Center for Climate Integrity (CCI), welcomed the filing in a statement.

“Oil and gas executives caused the climate crisis, then systematically lied about it. They need to be held accountable,” he said. “Exxon, Shell, BP, and API have spent decades targeting policymakers and the public with climate disinformation. It’s time for policymakers everywhere to realize that oil and gas executives will never be good faith partners in climate solutions.”

The new lawsuit comes after a federal appeals court upheld the dismissal of an earlier New York City nuisance suit that aimed to hold some of the same companies accountable for the cost of climate damages they knowingly caused. That ruling by the 2nd Circuit Court contrasts with other recent federal court decisions.

Responding to NYC’s latest move, API, ExxonMobil, and Shell all highlighted the dismissal, while a representative for BP declined to comment, according to CNN.