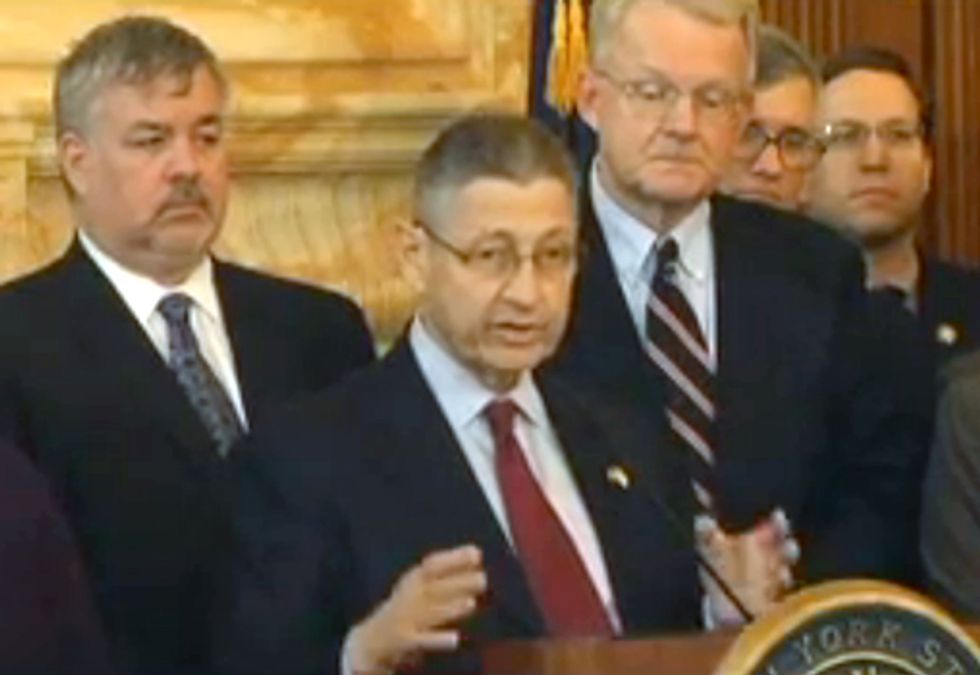 In a roll call vote of 95-40, the New York State Assembly has passed a two-year moratorium on hydraulic fracturing or fracking, the toxic horizontal drilling process through which oil and gas is procured that's found within shale rock basins across the country and the world.

The bill, if passed by the Senate and signed off by Democratic Gov. Andrew Cuomo, would close the state's doors to the oil and gas industry's desire to begin operating in New York's portion of the Marcellus Shale basin until May 2015. New York has had a moratorium on the books since 2008.

This is the third time the Assembly has passed such a bill, with similar moratorium bills passing in 2010 and 2011, but then dying a slow death in the Senate and never reaching the Governor's desk, meaning the de facto moratorium has remained in place.

Could the third time be a charm in 2013 in the Empire State?

Signs point to "quite possibly," because the bipartisan Independent Democratic Conference bloc of the Senate—which shares control of the Senate with the Republicans—has come out in support of the bill's passage, according to the Associates Press (AP).

"We have to put science first. We have to put the health of New Yorkers first," Sen. David Carlucci (D-38) and an IDC member told the AP.

Activists see it as a temporary reprieve and a victory for now. Alex Beauchamp of Food & Water Watch told the Albany Times-Union:

Hundreds of New York health professionals agree with the State Assembly that we should not move forward without a full, comprehensive examination of the health impacts of fracking ... Moving forward would simply enrich oil and gas companies that want to ship their gas overseas and their profits to Texas at the expense of New York’s public health and environment.

Today’s vote by the State Assembly to further delay natural gas development is tantamount to telling the people of the Southern Tier to ‘Drop Dead.’ Once again, Albany politicians are putting politics before science, and the special interests before the people. The people of New York deserve better, to say the least

Given New York's ability to fend off the industry's desires to enter the state for going on five years, all eyes in the fracking stratosphere will be on the Senate and Cuomo —a potential 2016 Democratic Party presidential candidate—in the coming days and weeks.

Watch this video of New York Assembly Speaker Sheldon Silver discuss the passage of the bill via timesunion.com: