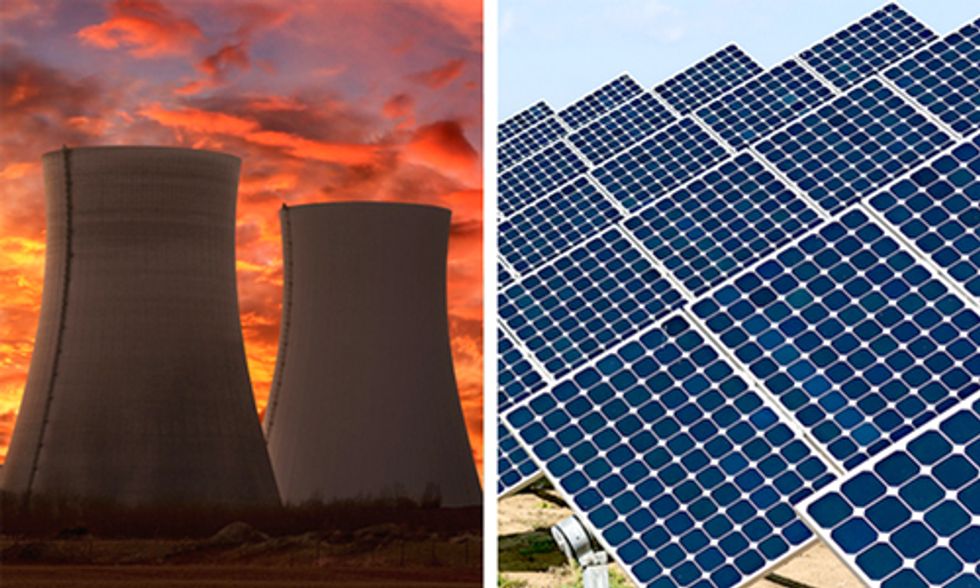 With nuclear power falling ever further behind renewables as a global energy source, and as the price of oil and gas falls, the future of the industry in 2015 and beyond looks bleak.

Investors are increasingly skeptical about putting their money into nuclear—whereas renewables promise an increasingly rapid return on investment, and may get a further boost if the governments of the world finally take climate change seriously.

Renewables now supply 22 percent of global electricity and nuclear only 11 percent—a share that is gradually falling as old plants close and fewer new ones are commissioned.

New large-scale installations of wind and solar power arrays continue to surge across the world. Countries without full grids and power outages, such as India, increasingly find that wind and solar are quick and easy ways to bring electricity to people who have previously had no supply.

Developed countries, meanwhile, faced with reducing carbon dioxide emissions, find that the cost of both these renewable technologies is coming down substantially. Subsidies for wind and solar are being reduced and, in some cases, will disappear altogether in the next 10 years.

The other advantage that renewables have is speed of installation. Solar panels, once manufactured, can be installed on a rooftop and be in operation in a single day. Wind turbines can be put up in a week.

Nuclear power, on the other hand, continues to get more expensive. In China and Russia, costs are not transparent, and even in democracies they hard to pin down. But it is clear that they are rising dramatically.

Building of the proposed twin European Pressurised Water reactors, called Hinkley Point C, in Britain’s West Country is due to start in 2015, but the price has risen several times already. Estimated construction costs have now jumped from £16 billion to £24 billion—before the first concrete has even been poured.

The other problem with nuclear is the time frame. Originally, Hinkley Point C was due to be completed by 2018. This has now slipped to 2024, but even this is optimistic judging by the performance of the two prototypes in Finland and France, both of which are late and over budget.

The Finnish plant was due to open in 2009, but is still at least three years from commissioning. The French plant is five years overdue.

In many countries, there are plans on paper for new nuclear stations, and China, South Korea and India are among those that are continuing to build them. Other countries, particularly where private capital is needed to finance them, are putting their plans on hold.

The U.S., which still has the largest number of reactors of any country in the world, is opting instead to extend the life of its plants. Many operators are considering applying for such extensions from 60 to 80 years. Provided they are up to modern safety standards, there seems no barrier to this.

Many other countries, including the UK, are extending the lives of their plants as long as possible, so the industry won’t be disappearing any time soon.

But one of the key problems for the nuclear sector is that reactors have been designed to be at full power all of the time. With renewables taking an increasing share of the market, a combination of nuclear, wind and solar can produce more electricity than required—leaving a problem of what to turn off.

A way round this problem being developed in Britain is large, strategically-based batteries. A five-megawatt battery, the largest in Europe, has just been commissioned in Leighton Buzzard, Bedfordshire, in the middle of England.

If, during a two-year trial, this works to smooth the peaks and troughs of demand, and cuts the costs of switching on expensive gas turbines, then a network of batteries will be installed across the country to harvest the intermittent supplies of renewables.

The only bright spot for nuclear at the moment is the development of small nuclear reactors. These are from 30 megawatts upwards and are designed to be built in a factory and assembled on site—a bit like wind turbines are.

These can be installed singly or in a series, depending on the demand. Their two greatest selling points are that they would be good in remote locations far from other power sources, and are said to be much safer than their larger cousins.

However, a drawback is the price tag of around $3 billion dollars. Both the U.S. and UK are supporting private firms in research and development, but commercial operation is a long way off.

Whether a small nuclear power station would be any more welcomed than a wind or solar farm to provide power in a neighbourhood is a question still to be tested.

Nuclear enthusiasts—and there are still many in the political and scientific world—continue to work on fast breeder reactors, fusion and thorium reactors, heavily supported by governments who still believe that one day the technology will be the source of cheap and unlimited power. But, so far, that remains a distant dream.

In the meantime, investors are increasingly sceptical about putting their money into nuclear—whereas renewables promise an increasingly rapid return on investment, and may get a further boost if the governments of the world finally take climate change seriously.