Can the World Come to Its Senses on Nuclear Weapons? 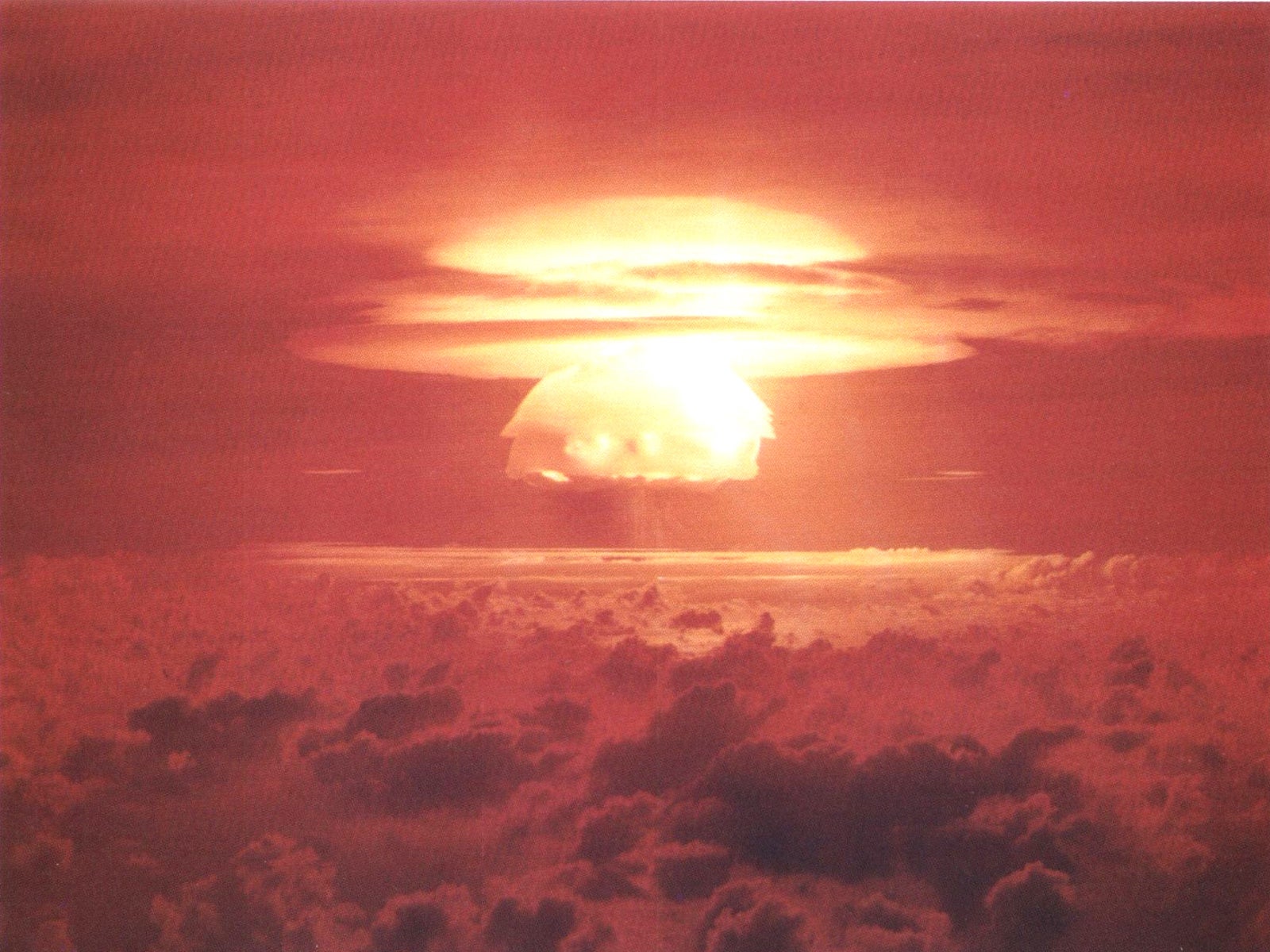 Looking back, one of the key moments that was to define both my professional and personal path was the moment I stepped onto the small atoll of Rongelap, in the Pacific Ocean.

At first glance, it appeared as if I had reached paradise; sandy beaches with coconut trees, water so crystal clear you could see the bottom, meters deep. And yet nothing was as it should be.

Waiting for us on the beach, with flowers, was the local community. The women held a banner reading “we love the future of our children.”

I was there with the crew of the Greenpeace ship Rainbow Warrior, to help them relocate. Their beloved island was making them sick, and what you couldn’t see here could kill you. 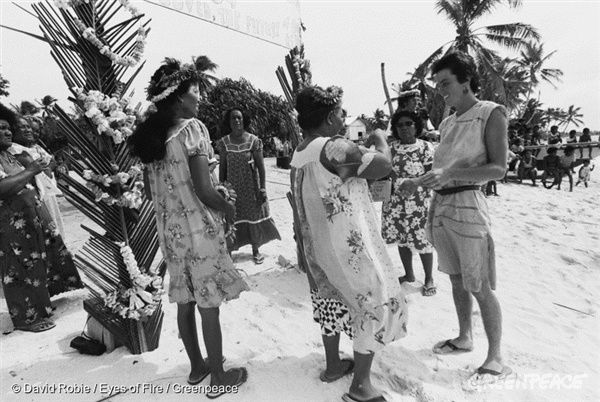 Bunny McDiarmid during the evacuation on May 17, 1985

Back in March 1954, the atoll received a massive dose of radiation when the U.S. tested its most powerful nuclear weapon. The test was code named “Castle Bravo” and the people of Rongelap were given no warning and offered no protection.

Radioactive fallout rained down on the island, falling for days. It dissolved into the water supplies, into the sea, and onto the houses, gardens and people. It contaminated them all.

In the tropics, where people spend a lot of time outside, the children played in the fine white ash, thinking it was snow.

In the years that followed, it became clear to the people that their island was no longer safe. The impact of the radiation poisoning, impossible to clean, was revealing itself with time. The number of children that had their damaged thyroids removed, the number of women that had children born with severe deformities, known as “jellyfish babies,” was impossible to ignore.

They no longer trusted what the U.S. military scientists were telling them about the safety of their island. They were left with no choice but to leave, with little hope of ever returning. 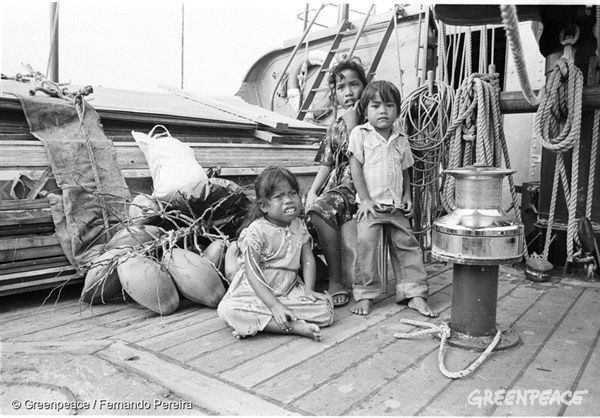 The contrast between the beautiful setting and the criminal irresponsibility of the U.S. military who used these people as guinea pigs is still heartbreaking this many years later.

And while every day during the past few months stands as a stark reminder as to why nuclear tests and nuclear weapons are so dangerous, today is a good day to reflect on the lessons we’ve learned in fighting nuclear tests, and, most importantly, how we carry on the fight to rid the world of this evil invention.

This year, we do so with renewed impetus.

As the last few months has revealed, the majority of the world’s nuclear warheads are in the hands of men for whom the idea of using them is becoming thinkable.

It is perhaps hard to imagine that not so very long ago, nuclear tests were common and held regularly. Hailed as a benchmark of scientific progress and the ultimate guarantee of security, nuclear weapons have been tested more than 2000 times since July 16, 1945, when the “Trinity” test was conducted by the U.S. army in New Mexico.

In the 60s and 70s, the number of tests peaked, before decreasing in number but continuing steadily until the late 90s.

Public outrage and the relentless efforts of determined individuals across the world eventually led major powers to stop testing in the physical environment. Greenpeace first set sail as an organization in 1971 to stop nuclear weapons testing and the role that we played in this, alongside so many, fills me with pride. 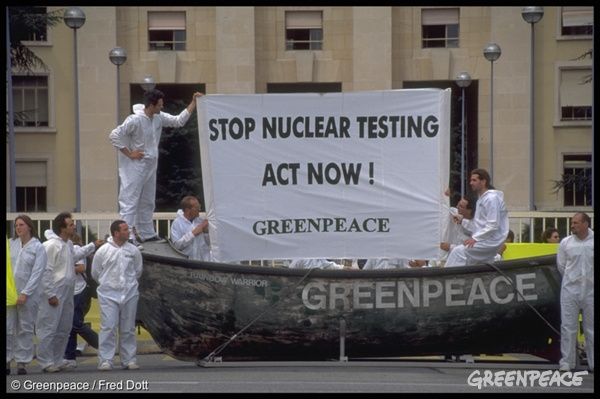 Protest at the UN building in Geneva, encouraging nations to sign the CTBT

In 1996, major states signed the Comprehensive Nuclear-Test-Ban Treaty pledging to discontinue all nuclear testing. Although the treaty has never entered into force, nuclear testing essentially screeched to a halt with its adoption.

The only country to have performed nuclear tests in the 21st century is North Korea—completing five tests in the past 11 years.

With the end of the Cold War, and with major powers signing various treaties committing them to disarm, media and public interest died down. We entered a period where many were living under the false pretense that the threat of nuclear war was something of the past.

And yet, the countries that have committed to disarming have not done so.

They have stalled, found excuses or blatantly ignored their commitments. The result is stark. Nearly 25 years after the end of the Cold War there are still an estimated 16,300 nuclear weapons at 98 sites in 14 countries. Rather than disarm, the nine nuclear-armed states continue to spend a fortune maintaining and modernizing their arsenals.

That false pretense under which we have been living has been shred to pieces during the last few months.

Nuclear war, it seems, is no longer inconceivable.

President Trump, who is the ultimate commander of the U.S.’s nuclear arsenal, (believed to consist of 6,800 warheads) has threatened North Korea with “fire and fury.” North Korea has threatened to attack the U.S. territory of Guam, in the Pacific Ocean. The threat of nuclear attack has become a bargaining chip, a threat spoken about all too easily and lightly.

These latest developments fill me with anger and even despair. Have we learned nothing from the past?

But I try to see the positive. At least the veil has been lifted, once again we are reminded of how high the stakes are, how fragile is our existence in a world where nuclear weapons are still so prevalent. 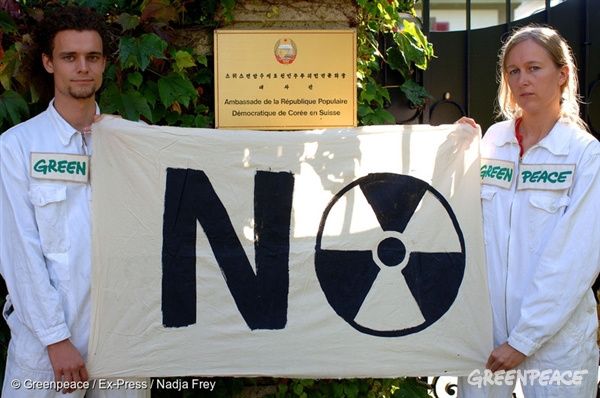 Activists hold a banner in front of the embassy of North Korea in Bern in 2006.

These weapons of mass destruction are designed for one purpose only: war. Their use and even the threat of their use poses an existential threat to all life on our precious planet.

The solution to the current crisis is clear: negotiation and diplomacy. Only this can bring us back from the brink. But this is not enough, we can wait no longer for the countries in possession of nuclear weapons to disarm.

In July, a historic milestone was reached at the United Nations in New York when 122 countries voted in favor of a new treaty banning nuclear weapons.

In September, the treaty will open for signature. Nuclear armed states and many of their allies have boycotted the treaty and have done all they could to try and derail the negotiation. They failed, but their absence is significant as unless a country ratifies the treaty, it is not bound by it.

Nevertheless, the importance of the treaty is enormous—it will make it harder for the proponents of nuclear weapons to describe them as a legitimate and useful means to provide security. The treaty sets the benchmark for a world where nuclear weapons are considered as a threat to security, not an avenue to it.

In this time where the threat of war has become thinkable again, world governments must use it as an impetus to come to their senses and disarm.

Bunny McDiarmid is the executive director of Greenpeace International.