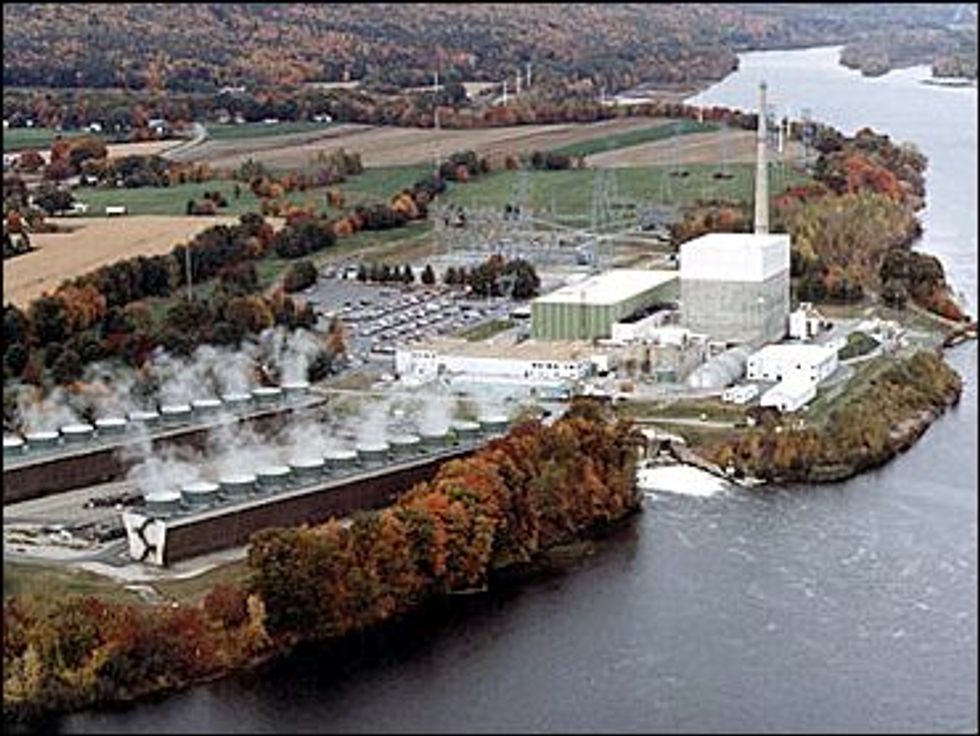 In the wake of Fukushima, grassroots citizen action is shutting the worldwide nuclear power industry.

A Solartopian tipping point is upon us in the U.S., Europe and Japan which will re-define how the human race gets its energy.

States rights and local democracy are at the core of the battle.

By mid-March a state board is likely to deny the Yankee reactor licenses to operate or to create radioactive waste.

If that happens, a Vermont shutdown could mark a critical moment in establishing state power over an atomic reactor. A critical domino would fall—as it has in Japan and Europe—and we will begin taking down old reactors all across the U.S. Four new reactors barely under construction will go down with them, making inevitable the end America's age of atomic power.

In Vermont, the New Orleans-based Entergy bought the Yankee reactor in 2002. Entergy agreed to shut it if the state's Public Service Board denied it a Certificate of Public Good to continue to operate and generate radioactive waste.

That decision is due by March 21, the forty-year anniversary of the reactor's 1972 opening.

Entergy has horrified many of its staunchest Green Mountain supporters. One of its cooling towers has simply collapsed from ancient rot and basic negligence. It has leaked tritium and other radioactive isotopes from pipes the company has said—under oath—do not exist.

Entergy sued Vermont after the legislature voted (26 to 4) to shut the reactor. When its lawyers won in federal court, Entergy demanded the public pay it $4 million in legal fees.

But the company miscalculated. It welcomed federal Judge Garvin Murtha's ruling that the legislature could not shut Yankee (the state is appealing). But Murtha also upheld the right of the Public Service Board to deny Entergy those operating and waste production permits.

So after lauding the decision, Entergy's lawyers now want Murtha to change it. Entergy has also asked the Public Service Board for a stay in its expected denial of the permits.

The case is clearly headed to the corporate-owned U.S. Supreme Court. But for Entergy to win, the Roberts majority would have to rule that the company was temporarily insane when signed its agreements with the state, and that a state agency can be forced (against its will) to issue reactor operating and waste creating permits.

The history of U.S. courts denying states the right to shut reactors dates back to the 1954 Atomic Energy Act. But deferral to the federal Nuclear Regulatory Commission's bent for keeping rush-bucket reactors on line is rapidly eroding. The Commission granted Vermont Yankee a license extension one day before the Fukushima disaster. A state-mandated shut down could seriously impact the political calculus for an industry whose grassroots opposition has become a full-on tsunami.

New York's Indian Point reactors are under assault from Governor Andrew Cuomo, whose father cut the 1988 deal that forced Long Island's Shoreham reactor to shut without ever achieving commercial operation.

Cuomo is being pushed by a fierce grassroots anti-nuke groundswell. Entergy does need state permits that would let two remaining reactors at Indian Point (Unit One went down long ago) continue heating and irradiating the Hudson River. New York could demand Entergy build extremely expensive cooling towers,which may force it to shut down for economic reasons. Similar forces are at work in New Jersey and other states.

In Florida, botched multi-billion-dollar repairs to the Crystal River reactor near Tampa have forced a brutal grassroots battle over soaring electric rates which must be approved by increasingly beleaguered state regulators. It is highly likely that reactor will never operate again.

At Pilgrim, Massachusetts is strongly intervening against a license extension. Both remaining reactors are currently shut at California's San Onofre (Unit One there also went down long ago), where grassroots activists—including local surfers—are in pitched battle against re-opening. Ohio's Davis-Besse is having its containment dome sliced for the fourth time. Two reactors in Nebraska are still recovering from major flooding.

All across the country, dozens of rust-bucket nukes stagger on their last legs even as the Nuclear Regulatory Commission hands them extended licenses in the face of escalating state and local opposition. Once the firewall against recourse from the states is breached, a flood of shutdowns could well follow.

In Japan, utilities must have permits from a host prefecture to re-open after refueling or repairs. Of 54 licensed reactors nationwide, only two now operate. Both could be shut soon, rendering Japan nuke-free for the first time in four decades.

Germany has shut eight reactors and will take down 11 more by 2012. Except for Great Britain and a number of eastern holdouts, the "nuclear renaissance" has been all but abandoned in Europe, with an escalating cascade of elderly nukes going cold and proposed new projects being abandoned.

The accelerating revolution in renewables has allowed solar, wind and other green sources to outstrip atomic reactors in cost, time to build, ecological impact and safety. As billions pour into Solartopian sources, private investment in atomic energy has all but disappeared—except where there are massive taxpayer subsidies.

Even that's not enough. In 2011, President Obama handed $8.33 billion in federal loan guarantees to the builders of two reactors at Georgia's Vogtle. But Peach State ratepayers are already being soaked for billions more in pre-payments, and the cost of the project is soaring. A parallel financial disaster looms at the Robinson site in neighboring South Carolina. Though the industry assumes these four reactors will eventually be finished, economic realities may say otherwise.

Cost estimates for new nukes have been soaring even before construction begins. Even with federal money, the builders still demand that state ratepayers foot the bill as the process proceeds, meaning consumers are on the hook for multiple billions even if the reactors never open. Pitched battles over this Construction Work in Progress scam have already been won by consumers in Missouri and are being fought in Iowa and elsewhere. As the years of building drag on, costs will escalate while renewables continue to become cheaper. Sooner or later, construction is likely to stop, as it did at numerous projects in the 1970s and 1980s which were never finished.

Today the Department of Energy still sits on some $10 billion in available guarantees without a recipient ready to build a new nuke. For the first time since early in the George W. Bush years, there has been no executive request for additional reactor construction loan guarantees.

In Finland and Flamanville, France, new reactor projects are years behind schedule and billions over budget.

With new construction virtually abandoned, and the continued operation of old reactors under intense attack in Japan, Europe and the U.S., only China and India remain as likely sites for large numbers of new nukes. Russia is doing its best to peddle them throughout the Third World. South Korea wants to sell reactors to the United Arab Emirates.

But grassroots resistance in India has been fierce. China is still mulling a post-Fukushima decision on whether to proceed with reactors already under construction. Signs of a popular uprising against rampant pollution—including nuclear reactors—indicate growing public opposition.

But here in the U.S., we are at the fall-off-the-cliff moment for atomic energy, new and old.

Entergy, says Deb Katz of the Citizens Awareness Network, has been "blinded by its arrogance and contempt for the state of Vermont." The company, she says, "is attempting to establish that corporations are more powerful than the states they operate in."

If the citizens of Vermont can shut Yankee, a dam will be breached and the post Fukushima power of a rising grassroots tsunami will be made tangible.

Solartopia will be that much closer. And the grassroots No Nukes campaign will begin to take its place as one of history's most successful popular movements.

Let's just make sure these shut-downs happen before the next Fukushima irradiates us all.