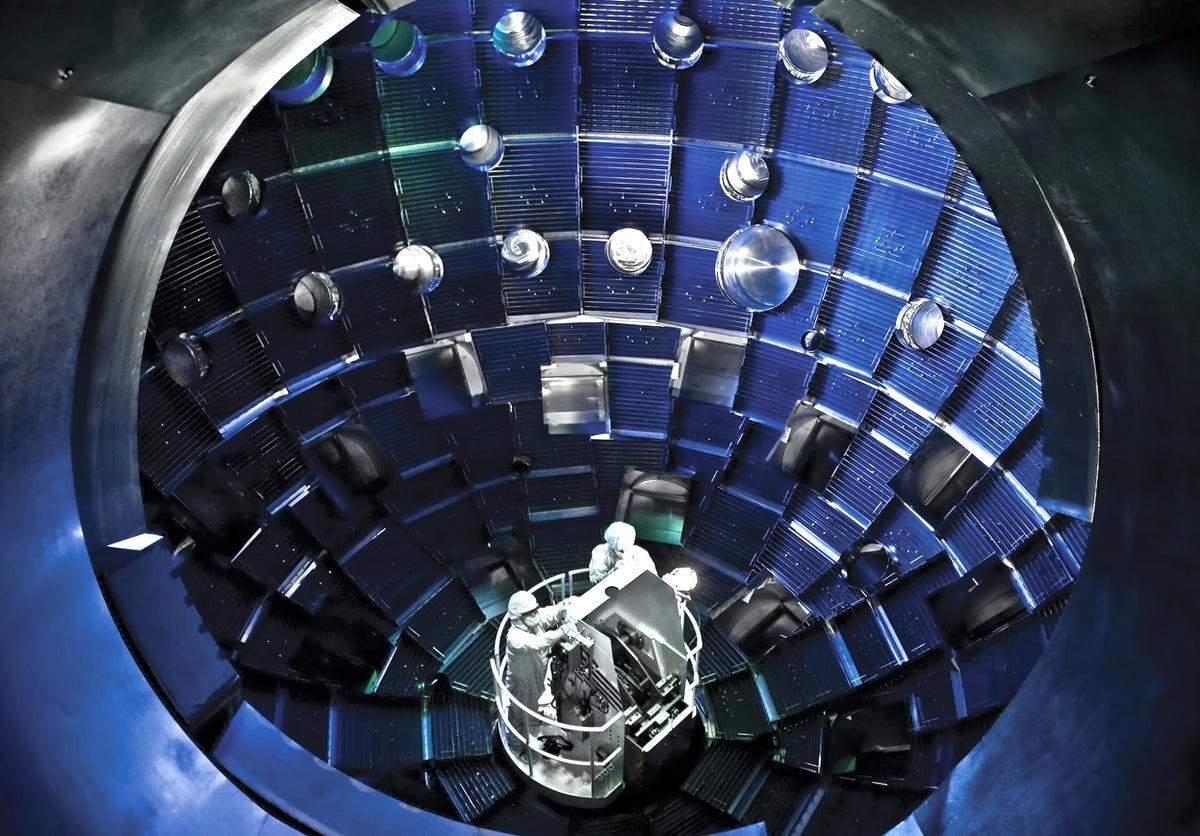 The target chamber at the National Ignition Facility has been the site of a number of breakthroughs in fusion physics. U.S. Department of Energy / Lawrence Livermore National Laboratory

American scientists have announced what they have called a major breakthrough in a long-elusive goal of creating energy from nuclear fusion.

The U.S. Department of Energy said on Dec. 13, 2022, that for the first time – and after several decades of trying – scientists have managed to get more energy out of the process than they had to put in.

But just how significant is the development? And how far off is the long-sought dream of fusion providing abundant, clean energy? Carolyn Kuranz, an associate professor of nuclear engineering at the University of Michigan who has worked at the facility that just broke the fusion record, helps explain this new result.

What Happened in the Fusion Chamber?

Fusion is a nuclear reaction that combines two atoms to create one or more new atoms with slightly less total mass. The difference in mass is released as energy, as described by Einstein’s famous equation, E = mc2 , where energy equals mass times the speed of light squared. Since the speed of light is enormous, converting just a tiny amount of mass into energy – like what happens in fusion – produces a similarly enormous amount of energy.

Researchers at the U.S. Government’s National Ignition Facility in California have demonstrated, for the first time, what is known as “fusion ignition.” Ignition is when a fusion reaction produces more energy than is being put into the reaction from an outside source and becomes self-sustaining.

The technique used at the National Ignition Facility involved shooting 192 lasers at a 0.04 inch (1 mm) pellet of fuel made of deuterium and tritium – two versions of the element hydrogen with extra neutrons – placed in a gold canister. When the lasers hit the canister, they produce X-rays that heat and compress the fuel pellet to about 20 times the density of lead and to more than 5 million degrees Fahrenheit (3 million Celsius) – about 100 times hotter than the surface of the Sun. If you can maintain these conditions for a long enough time, the fuel will fuse and release energy.

The fuel and canister get vaporized within a few billionths of a second during the experiment. Researchers then hope their equipment survived the heat and accurately measured the energy released by the fusion reaction.

So What Did They Accomplish?

To assess the success of a fusion experiment, physicists look at the ratio between the energy released from the process of fusion and the amount of energy within the lasers. This ratio is called gain.

Anything above a gain of 1 means that the fusion process released more energy than the lasers delivered.

On Dec. 5, 2022, the National Ignition Facility shot a pellet of fuel with 2 million joules of laser energy – about the amount of power it takes to run a hair dryer for 15 minutes – all contained within a few billionths of a second. This triggered a fusion reaction that released 3 million joules. That is a gain of about 1.5, smashing the previous record of a gain of 0.7 achieved by the facility in August 2021.

How Big a Deal Is This Result?

Fusion energy has been the “holy grail” of energy production for nearly half a century. While a gain of 1.5 is, I believe, a truly historic scientific breakthrough, there is still a long way to go before fusion is a viable energy source.

While the laser energy of 2 million joules was less than the fusion yield of 3 million joules, it took the facility nearly 300 million joules to produce the lasers used in this experiment. This result has shown that fusion ignition is possible, but it will take a lot of work to improve the efficiency to the point where fusion can provide a net positive energy return when taking into consideration the entire end-to-end system, not just a single interaction between the lasers and the fuel.

What Needs to Be Improved?

There are a number of pieces of the fusion puzzle that scientists have been steadily improving for decades to produce this result, and further work can make this process more efficient.

Finally, while one part of the fuel, deuterium, is naturally abundant in sea water, tritium is much rarer. Fusion itself actually produces tritium, so researchers are hoping to develop ways of harvesting this tritium directly. In the meantime, there are other methods available to produce the needed fuel.

These and other scientific, technological and engineering hurdles will need to be overcome before fusion will produce electricity for your home. Work will also need to be done to bring the cost of a fusion power plant well down from the $3.5 billion of the National Ignition Facility. These steps will require significant investment from both the federal government and private industry.

It’s worth noting that there is a global race around fusion, with many other labs around the world pursuing different techniques. But with the new result from the National Ignition Facility, the world has, for the first time, seen evidence that the dream of fusion is achievable.

Carolyn Kuranz is an associate professor of nuclear engineering at the University of Michigan.