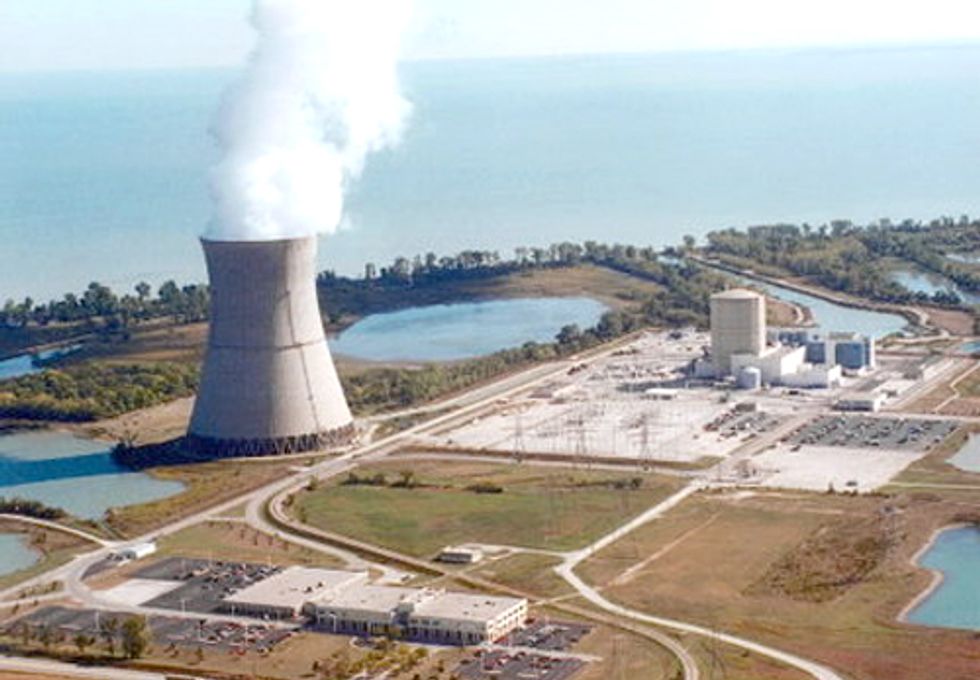 According to recent reports from the nuclear watchdog Beyond Nuclear and several Great Lakes environmental organizations, the U.S. Nuclear Regulatory Commission (NRC) is up to its usual practices as an industry captured agency. Collusion and flagrant cover-ups at the Davis Besse nuclear power plant on the shores of Lake Erie and at the Palisades nuclear plant on the shores of Lake Michigan have drawn the ire of Rep. Dennis Kucinich (D-OH) and Rep. Ed Markey (D-Mass.) who have called on the NRC’s investigator general to investigate NRC region 3 practices and motivations of the NRC in allowing these plants to operate with grave safety concerns.

With respect to Davis Besse it seems like a flashback to the 2002 hole in the reactor head incident as part of the history of this nuclear nightmare between Toledo and Cleveland on the western Lake Erie basin. In 2003, the NRC’s chairman resigned after the General Accounting Office found the agency guilty of collusion with plant operator FirstEnergy in their attempts to cover-up the seriousness of corrosion issues that brought Davis Besse within 3/16ths of an inch of a core containment breach and catastrophic release of radioactivity.

Then Representative Kucinich led the call of the Inspector General’s office as he is once again after FirstEnergy and the NRC have colluded to downplay the seriousness of widespread cracking that has been discovered over the past year throughout the concrete shield building that houses the Davis Besse reactor.

According to some alarming revelations found in NRC documents revealed through a Freedom of Information Act filing by Kevin Kamps at Beyond Nuclear, NRC investigators have serious reservations as to whether the Davis Besse shield building could withstand even minor seismic activity and admit that even before the widespread cracking was discovered that the shield building was never designed “for containment accident pressure and temperature.”

This means that, even when brand new and un-cracked, Davis Besse’s shield building was not capable of preventing catastrophic radioactivity releases during a reactor core meltdown. An inner steel containment vessel, a mere 1.5 inches thick when brand new, would thus be the last line of defense.

However, the environmental intervenors have un-earthed NRC and FirstEnergy documents showing that the steel containment vessel has suffered significant corrosion over the past several decades due to infiltrating and standing chemically “aggressive” groundwater in the “sand bed” region surrounding the bottom of the containment vessel (which has also degraded the shield building’s underground “moisture barrier”), as well as due to an acidic borated water leak from the refueling channel near the top of the containment vessel.

The coalition of environmental and citizens groups fighting the relicensing of Davis Besse has pointed to a 1982 study, Calculation of Reactor Accident Consequences (CRAC-2), commissioned by the NRC, to show how bad the casualties and property damage would be downwind and downstream of a catastrophic radioactivity release which escapes Davis Besse’s corroded inner steel containment vessel and cracked outer shield building. CRAC-2 lists the following consequences at Davis-Besse: 1,400 Peak Early Fatalities; 73,000 Peak Early Injuries; 10,000 Peak Cancer Deaths, and $84 billion in property damage. However, CRAC-2 was based on 1970 U.S. Census data.

As reported by Jeff Donn at the Associated Press in summer 2011, populations around U.S. nuclear power plants have “soared” in the past 42 years, meaning those casualty figures near Davis Besse would likely now be much worse. And, when adjusted for inflation from 1982-dollar figures, property damage would today surmount $187 billion in 2010-dollar figures.

According to the environmental coalition’s attorney Terry Lodge, "What we have established from NRC's own documents is that there are two Nuclear Regulatory Commissions: some hard-working, intelligent people who set out to find out the truth of these very dangerous technical problems and their causes, and a political class in the agency that is dedicated to pulling the plug on any investigation that threatens utility profits, above all else. The search for truth about the shield building had to be cut off because it went too close to the cash cow."

Michael Keegan of Don’t Waste Michigan in Monroe stated: "These multiple crackings, complete with concrete degradation of the shield containment building, are but a metaphor for the entire dilapidated Davis Besse atomic reactor. This reactor is running on borrowed time, propped up on stilts by a captured regulator that is now under investigation for doing so."

Kevin Kamps, of national watchdog Beyond Nuclear in Takoma Park, Maryland stated: “NRC staff and management, both at its national headquarters in Rockville, Maryland, as well as its Region 3 office outside Chicago, worked long hours, during evenings, on weekends, and even through the Thanksgiving holiday, in order to rubber stamp reactor restart approval at Davis Besse in a great big hurry, despite countless unanswered questions and unresolved concerns about the shield building cracking.”

As regards to the chronically leaking Palisade’s nuclear reactor located on the shores of Lake Michigan in southwest Michigan, the NRC’s investigator general is conducting an investigation into why recently resigned NRC chairman Gregory Jaczko was kept in the dark, along with the public, about a leak of Safety Injection Refueling Water from a storage tank into buckets in the control room when he was on a visit to the facility before meeting with nuclear watchdogs and environmentalists back in May of this year.

This investigation was called for by Congressman Markey after it was revealed that ongoing safety issues were covered-up by the Entergy owned Palisades even while a tour of the plant was in act. Palisades has a terrible record of leaks, mishaps and accidents, some of which were outlined in this 2010 report Headaches at Palisades: Broken Seals & Failed Heals, by the Union of Concerned Scientist’s David Lochbaum. Most recently on Aug. 12 Palisades was shut down for a leak of radioactive and acidic primary coolant, escaping from safety-critical control rod drive mechanisms attached to its degraded lid, atop what is considered by the NRC itself to be most embrittled reactor pressure vessel in the U.S.

Palisades’ operator Entergy is also in the habit of periodically releasing radioactive steam into the area due to reoccurring electrical accidents most recently in September of 2011. This steam may be a contributing factor to the fact that the area around South Haven is considered a cancer cluster by medical researchers from the state of Michigan Health department.

Jaczko was the subject of what Sen. Harry Reid (D-NV) called a witch hunt by politically motivated commissioners angered at the fact that Jaczko had helped to mothball the Yucca Mountain nuclear waste repository and resigned in June. A December 2011 article by Andrew Cockburn, provides an overview of the politically motivated actions at an NRC that has clearly distinguished itself to be nothing more than a regulatory agency under complete control by an industry always willing to put profit margins above any considerations of health, public safety or property values. As Kevin Kamps was quoted as saying in this article in regards to Jaczko “He’s not ‘our guy’ by any means, he has voted to re-license plants that should probably be shut down, but he does care about safety, in ways that the others do not.” It was also well put by distinguished journalist Karl Grossman, when he said “Jaczko was insufficiently pro nuclear.”

One of the NRC commissioners responsible forcing out Jaczko was Commissioner William Ostendorff. Ostendorff reportedly threw a temper tantrum at the NRC calling on the NRC’s Investigator General to halt her investigation into the cover-up at Palisades calling it a waste of taxpayer dollars. Now Ostendorff finds himself under investigation for impeding an investigation. Ostendorff is an explicit representation of how the NRC operates as a captured agency through orchestrated industry deception.

The story of the NRC and nuclear regulation in the U.S. is one of corruption and collusion at the whim of industry dictates. Rep. Kucinich, along with Rep. Markey and Senators Barbara Boxer (D-CA), Bernie Sanders (I-Vt.) and Ron Wyden (D-OR) are some of the few voices of credibility in the wilderness of congressional complacency and acquiescence to the profit driven desires of an industry driven by the vast mythology of the “peaceful atom” that has been perpetrated by decades of propaganda from the likes of the industry front group the Nuclear Energy Institute. Corporations like Exelon, GE, FirstEnergy, Entergy and their political escorts that prop them up from the White House and throughout the halls of Congress continue to allow the operation of 104 reactors across the U.S.

Obama has surrounded himself with nuclear industry advisors and cabinet members as part of his nuclear powered White House. Meanwhile members of Congress like Rep. Fred Upton (R-MI), who’s district includes Palisades and Rep. Marcy Kaptur (D-OH) who resides over the district that includes Davis Besse give carte blanche to the NRC, Entergy and FirstEnergy putting what they define as “good jobs” and “economic partnership” over any concerns of health and safety for their constituents or for the entire Great Lakes ecosystem.

In regards to the cases of Palisades and Davis Besse, Rep. Kucinich stated “I can’t say the cases are related, but the similarities between these two investigations are troubling. In Michigan, an effort to determine why a radioactive leak was kept from the Chairman of NRC may have been undermined. In Ohio, we witnessed agency officials give public statements that varied dramatically from what engineers had told my staff. I cannot determine what caused this change in the answers of these Region III engineers, but I am concerned that it was in response to political pressure. I hope that the Inspector General is able to restore confidence in the NRC’s ability to provide effective oversight of our nation’s nuclear power plants.”

This is a confidence that for many citizens that have been following culture of collusion and corruption at the NRC since its inception has never existed.

Jaczko has now been hunted out and replaced by Allison Macfarlane who has so far decided to keep her head in the sand when it comes to the political motivations of the NRC and its cosiness with the nuclear industry that it purports to regulate. The commissioners responsible for Jaczko’s demise remain. When asked about the perception of the NRC being a captured agency at a recent press conference Macfarlane feigned ignorance, or maybe it is that she is truly ignorant that this perception exists. If she wants to “restore confidence” as Kucinich puts it or “build public confidence in the agency by improving communication and increasing transparency” as she put it, she better get on top of the ongoing investigations of her own Inspector General very quickly. The reality that the NRC is now regulating based on deception and lies does not bode well for her attempts to build public confidence.

Sen. Harry Reid (D-NV) recently referred to NRC commissioner Bill Magwood as a “treacherous, miserable liar,” referring to questions regarding Magwood’s support for a nuclear repository at Yucca Mountain. This repository was considered to be geologically inadequate by former chairman Jaczko and the new chair Allison Macfarlane until she jumped into the political playing field and said she would keep an open mind about the Yucca Mountain repository during her senate confirmation hearing.