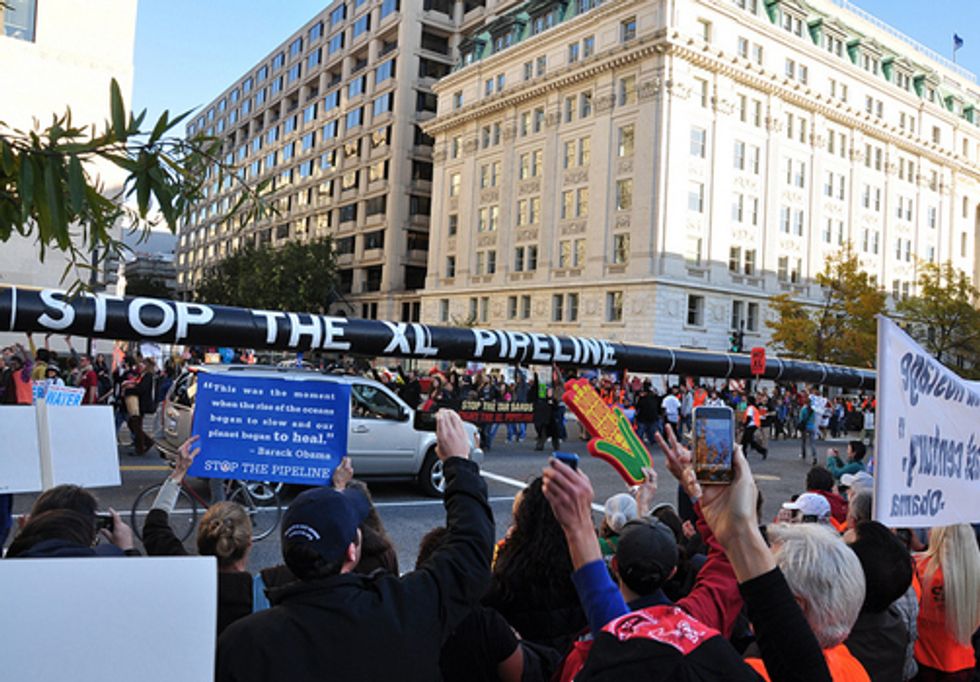 “We’re here today to stand together and say, we believe in a brighter future,” Adams said in prepared remarks before the White House, where nine months earlier he received the Presidential Medal of Freedom for his work protecting the environment.

“Instead of building a pipeline to the past, it's time to draw a line in the sand,” Adams said. “And it’s time to draw the line on tar sands. That’s the line we’re drawing here today.”

Here are the remarks made by NRDC Founding Director John Adams on Nov. 6 at Lafayette Square in Washington, D.C.

I think it’s fair to say we all agree here on a couple of things:

Cracking open the second-largest carbon pool anywhere on Earth to feed our costly addiction to oil – is a bad idea.

Putting our ranchers and farmers, our waters and lands at risk just so Big Oil can make even bigger profits - is a bad idea.

And laying a pipeline across the American heartland to take the dirtiest oil on the planet from the Canadian tar sands to the Gulf of Mexico - is a bad idea.

Now, the oil companies come here, to the People’s House, stand before the President of the United States, and try to tell him this is all somehow good for America.

In fact, they say, it’s in our national interest.

It may be in the interest of the oil companies; but for the rest of us, it’s just a really bad idea.

We’re here today to stand together and say, we believe in a brighter future.

We believe in a better way.

We can move beyond our costly addiction to oil.

We can get power from the sun and the wind.

We can build cars that get an honest-to-goodness sixty miles to the gallon.

And we can power our country into the 21st Century, without going to the ends of the Earth to do it.

That is the future we believe in.

That is the promise of a better way.

And we are not going to stand by and see the future we believe in held hostage to the profits of Big Oil.

Instead of building a pipeline to the past, it's time to draw a line in the sand.

And it’s time to draw the line on tar sands.

A line that encircles the White House and stretches from here to the rivers of South Dakota; to the Great Plains of Kansas; the sweeping grain fields of Oklahoma;

A line that reaches through the lush Sandhills of Nebraska; across our ranches, communities, cities and farms, all the way from Washington to the Canadian tar sands.

A line that delivers us from the destructive ways of the past to the clean energy future that can power this country into the 21st Century.

That is the line we will draw here today.

That is the line we will stand in together, until this race is won.

To view photos from the Nov. 6 event and other Keystone XL events, click here.