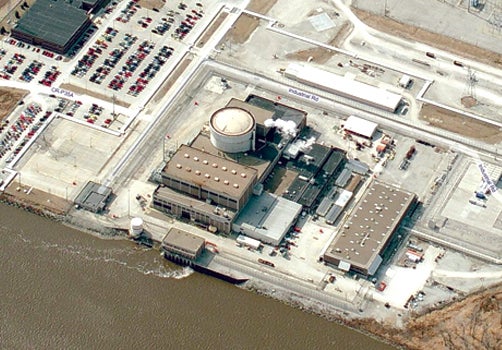 As the one-year anniversary of the Fukushima nuclear accident approaches, flood waters from the giant tsunami of March 2011 have long receded, But the lessons of Fukushima continue to shake the nuclear power industry around the world, especially in the U.S.

One thing we learned from Fukushima was that while nuclear power plants need water to cool their superhot reactors, too much water can damage important components. In the U.S., where a tsunami strikes only rarely, the federal Nuclear Regulatory Commission (NRC) is now looking at alternative ways water can damage a reactor. One prominent possibility—dam failure, either by overtopping or collapse.

In a heavily-redacted report issued March 6, the NRC identified 35 American nuclear plants that sit precariously downstream from a potential dam disaster. Owners of these plants are required to calculate the “Probable Maximum Flood” that could strike their reactors and disable safety components. They are supposed to design their plants so that they can operate safely in any “probable” flood. But the new report, known by the scintillating title, Screening Review for Generic Issue 204, says flood dangers facing the 35 plants may be greater than previously thought.

For example, Duke Energy, owner of the three Oconee nuclear reactors in South Carolina, did not consider the impact of a failure at the large rockfill Jocassee Dam located 10 miles upstream “when calculating potential flood levels at the site.”

As a result, a third of the U.S. nuclear power entire industry could be operating beyond the bounds of NRC-imposed safety margins.

The concern, the NRC says, is so serious more study is needed before anyone can be sure the plants are safe. The NRC is quick to point out that no plant is in immediate danger, but recent experience has shown that great floods can occur without any notice. The impacts of a major dam collapse could be felt within minutes. There would be no advance warning, as was the case at Fukushima.

With the onset of global warming, climate scientists are saying that floods are striking at greater severity than ever before. All of the nation’s nuclear plants were designed, built and licensed many years before dam collapse possibilities were thoroughly reviewed, or climate changes were even contemplated.

The 35 plants are located at 20 different sites around the country. There are from one-to-three reactors at each site, as the list below shows.

One of the plants on the NRC’s list is the Columbia Generating Station at the Hanford Nuclear Reservation located about 180 miles up the Columbia River from Portland, Ore.

The plants, and the number of affected reactors at each site, are:

The report points out that dam failures are “common.” Since 1975, more than 700 dam failures have occurred in the U.S. Many of these uncontrolled releases of water were small, and had little impact. But 148 of the failures involved a large dam taller than 40 feet.

In conclusion, the report said, “the totality of information analyzed in this report suggests that external flooding due to upstream dam failure poses a larger than expected risk to plants and public safety with a probability and consequence sufficient to warrant a Generic Issue evaluation.”

Major portions of the report have been blacked out by the NRC at the request of other federal agencies. “Due (to) the sensitive nature of some information in this analysis, redactions are necessary in this public version. The NRC has coordinated with other Federal agencies (Department of Homeland Security, Federal Energy Regulatory Commission, and U.S Army Corps of Engineers) on the sensitivity of the redacted information,” the report says.

Cascadia Times obtained the report after requesting filing a request for it January 2012 under the Freedom of Information Act. The report was completed in July 2011 but its release was delayed while officials decided what portions of it should be redacted.