25 Notorious Bloopers in the Last 8 Years 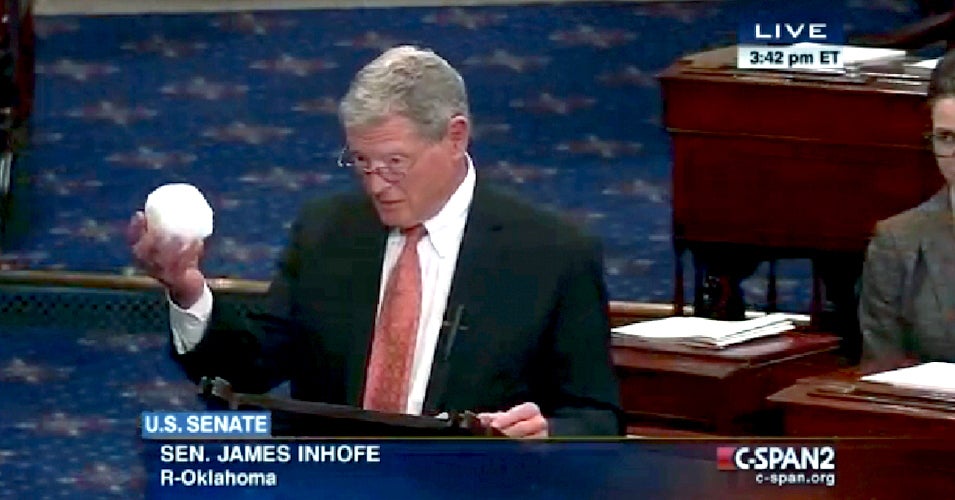 As the curtain comes down on President Barack Obama’s eight years in the White House, most Americans seemed convinced of one of two things: We’re either about to Make America Great Again®, or we’re about to hurtle into an uncertain epoch that I like to call the Idiocene.

But before we turn the page on this administration let’s take a look back at the tall tales, regrettable pronouncements, farces and scams on climate and the environment during the Obama years. Anti-regulatory zealots led the pack, but President Obama contributed a few of his own—starting on his first full day in office:

After promising transparency, President Obama’s Administration was called “one of the most secretive.”

1. January 2009: The most transparent administration? Not quite.

A day after his inauguration, President Obama signed a memorandum promising: “the most transparent administration in history.”

By May 2016, a different verdict came in. Washington Post media columnist Margaret Sullivan called it “one of the most secretive.” In August 2015, 52 journalism organizations, including the Society of Environmental Journalists, sent an appeal to the White House, asking for an end to restrictions on government employees’ contact with reporters.

Scientists begin asking questions about why the pace of rising temperatures seems to be defying projections and slowing. Despite the emergence of serious, credible reasons for this – notably that the oceans are working overtime to absorb excess heat – climate deniers have a field day with cherry-picked data.

Even as daily, monthly, and annual warmth records continue to be broken, there’s been “no global warming at all” for nearly two decades in Deniertown.

In a November 2009 press release, the West Virginia Chamber of Commerce declares the “War On Coal” is underway.

In a press release, the West Virginia Chamber of Commerce declares the “War On Coal” is underway.

Hackers, believed to be Russian-based, steal thousands of emails from the University of East Anglia’s Climate Research Unit. Climate deniers spin a few poorly worded correspondences between scientists into a vast conspiracy to fake climate research.

The faux scandal upends coverage of the Copenhagen climate summit, the scientists are cleared of any wrongdoing by multiple investigations, and the hackers are never caught. But their work foreshadows the 2016 election hack.

The Citizens United decision breaches the dam on corporate cash. The high court votes 5-4 to fundamentally reshape the already-cockeyed way election campaigns are financed, offering cover to corporations and super-PACs to target undesirable candidates for defeat.

“Moderate” Republicans are virtually driven into extinction, and the few who acknowledge climate change have a change of heart.

An ESPN.com outdoors columnist launches a viral hoax, suggesting that Obama is planning to outlaw all recreational fishing. Within days, chronic Obama critics—from Fox News and the Daily Caller to columnist Michelle Malkin, RedState.com and GatewayPundit.com—dutifully spread the word about “Obama’s latest assault on freedom.” Except not a word of it is remotely true.

8. May 2010: Limbaugh gets to the bottom of Deepwater Horizon

The UK’s General Medical Council strips Dr. Andrew Wakefield of his license to practice. He authored the 1998 paper linking vaccines to autism. The paper was later retracted by The Lancet and declared “utterly false.”

Maine Gov. Paul LePage, possibly the only politician too dumb for the Trump Administration, declares that BPA’s worst-case scenario would be women with beards.

Solyndra fails. The solar company stranded investors and bailed on a half-billion dollar Energy Department loan amid evidence that Obama Administration cronies stood to benefit. But solar energy critics vault a relatively minor scandal into a renewables Benghazi – overlooking the generally successful record of DOE’s startup loans as well as the much larger handouts given to fossil fuel companies.

Donald Trump sends the first of 16 angry, obsessive letters or emails to Scotland’s First Minister about the proposed windfarm near his golf resort. Sad!!

An electronic billboard on a Chicago freeway heralds the start of a campaign by the Heartland Institute to brand climate-change advocates as cold-blooded serial killers. The first features the Unabomber, Ted Kaczynski. It draws such a backlash that the billboards featuring climate advocates Adolf Hitler and Osama bin Laden (really) never get a full airing. Heartland is further tarnished by revelations that it solicited fossil fuel money to pursue its climate denial agenda.

As record cold grips much of the U.S., Rush Limbaugh and others accuse meteorologists of inventing the term “polar vortex” in an attempt to hide Mother Nature’s harsh rebuke of climate science. Cooler heads like Al Roker point out that “polar vortex” has been discussed in meteorology texts since at least the 1950’s.

ExxonMobil boss Rex Tillerson joins a lawsuit against a fracking project near his home. He quits the case a few months later after harsh accusations that he’s a NIMBYllionaire.

Nevada Rancher Cliven Bundy leads an armed standoff against BLM agents. Bundy has refused to pay BLM grazing fees since 1993. In 2016, his sons lead an armed takeover at a National Wildlife Refuge in Oregon. They’ve vowed to do it again.

The struggling city of Flint switches its water source. Reports of discolored water, foul smell and taste, and high bacteria and lead levels go ignored for more than a year. The local, state and federal governments declare a state of emergency nineteen months later.

Documents obtained by Greenpeace and the Climate Investigations Center show climate researcher Willie Soon took more than a million dollars in funding from fossil fuel interests. He promised “deliverables” to his benefactors, and generated studies that cast doubt on human-caused climate change.

Senator and alpha-male among deniers Jim Inhofe throws a snowball at the Senate President’s podium, forever proving climate change is a hoax.

Climate deniers stage a pilgrimage to Rome to “educate” Pope Francis on his “unholy alliance with the UN’s climate agenda” and to suggest that Jesus would have served the poor by burning more coal. They are not granted an audience. Their press conference didn’t really get one, either.

Investigations by InsideClimate News and The Los Angeles Times reveal that Exxon’s scientists had confirmed the dangers of climate change decades ago, while the company took virtually no action to curb it and continued to fund climate-denying scientists and groups.

Chemical giants Dow and DuPont announce a $130 billion merger. The deal, along with the proposed merger of two other chemical giants, Bayer and Monsanto, is still pending.

Peter Dykstra is a contributing writer and editor to both The Daily Climate and the Environmental Health News. Follow him on Twitter: @pdykstra