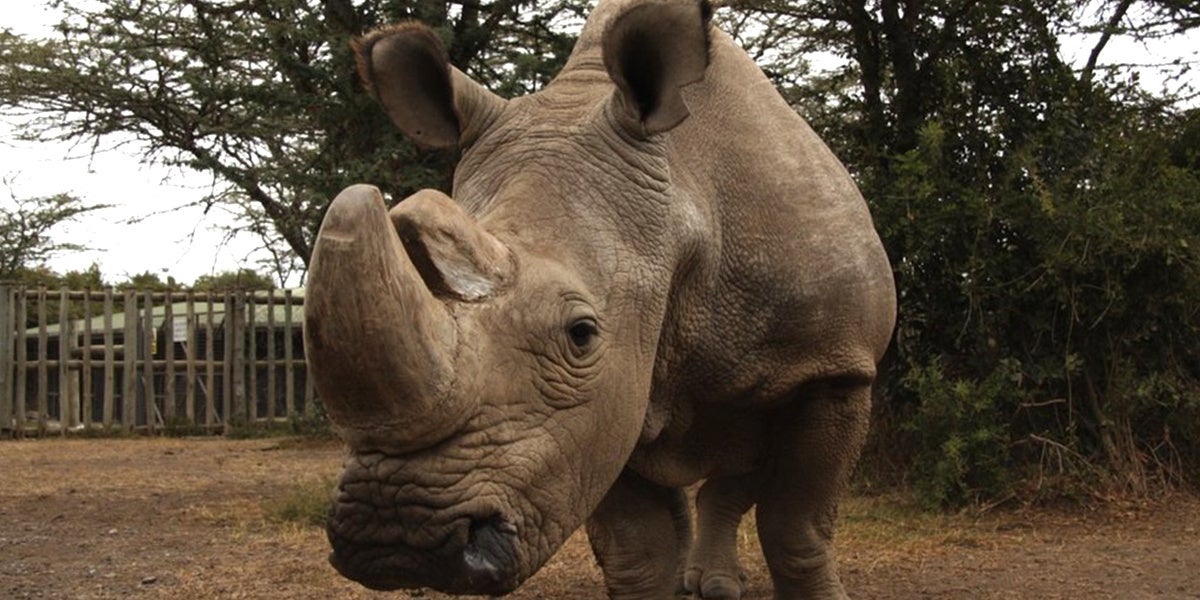 The world’s last male northern white
rhino has died, leaving only two females left to save the subspecies from extinction, the wildlife conservancy taking care of him announced Tuesday.

The 45-year-old rhinoceros, named Sudan, was euthanized Monday at the
Ol Pejeta Conservancy in Kenya.

He was being treated for age-related complications that led to degenerative changes in his muscles and bones and also gave him extensive skin wounds.

“His condition worsened significantly in the last 24 hours; he was unable to stand up and was suffering a great deal,” Ol Pejeta said in a
statement. “The veterinary team from the Dvůr Králové Zoo, Ol Pejeta and Kenya Wildlife Service made the decision to euthanize him.”

Sudan previously lived at the Dvůr Králové Zoo in the Czech Republic before being moved to Ol Pejeta Conservancy in 2009.

“During his final years, Sudan came back to Africa and stole the heart of many with his dignity and strength,” the conservancy said.

“Sudan will be remembered for his unusually memorable life. In the 1970s, he escaped extinction of his kind in the wild when he was moved to Dvůr Králové Zoo,” the conservancy said. “Throughout his existence, he significantly contributed to survival of his species as he sired two females.”

Sudan lived at Ol Pejeta with his daughter and granddaughter—the last two females of the same species—27-year-old Najin and 17-year-old Fatu.

“The only hope for the preservation of this subspecies now lies in developing in vitro fertilization (IVF) techniques,” the conservancy said.

Ol Pejeta, Dvůr Králové Zoo and its partners at ZW Berlin, Avantea Cremona and the Kenya Wildlife Service will “try and conduct the first-ever procedure to safely remove egg cells from remaining females, fertilize these with semen previously collected from northern white males, and insert the resulting embryos into female southern white rhinos acting as surrogates,” the conservancy said.

This procedure has never been done before in rhinos and does not come without risks, Ol Pejeta noted. The estimated cost of IVF—from development of the method, to trials, implantation and the creation of a viable breeding herd of northern whites—could be as much as $9 million.

“Sudan was the last northern white rhino that was born in the wild. His death is a cruel symbol of human disregard for nature and it saddened everyone who knew him. But we should not give up. We must take advantage of the unique situation in which cellular technologies are utilized for conservation of critically endangered species,” said Jan Stejskal, director of international projects at Dvůr Králové Zoo.

“It may sound unbelievable, but thanks to the newly developed techniques even Sudan could still have an offspring. We will be happy for everyone who will
help us in our joint effort.”

The northern white rhino originally ranged in vast numbers in East and Central Africa but habitat loss, conflict and poaching the animals for their prized horns has pushed their population to the brink of extinction. By the mid-2003 there were only 32 of the animals left in the wild. Now, with Sudan’s passing, only two remain.

“He was a great ambassador for his species and will be remembered for the work he did to raise awareness globally of the plight facing not only rhinos, but also the many thousands of other species facing extinction as a result of unsustainable human activity,” Vigne said. “One day, his demise will hopefully be seen as a seminal moment for conservationists worldwide.”

Rhino populations around the world are at a fraction of the estimated 100,000 that used to roam Earth in the early 20th century.

Tributes around the world have since poured in. Bindi Irwin, conservationist and daughter of the late Steve Irwin, said Sudan’s death was a “heartbreaking” loss.

“Now, more than ever, we must stand together and protect our rhinos,” she added.

Today was heartbreaking for us all as the world says goodbye to Sudan, the last male Northern White Rhino on Earth. We are sending all our love to the team at @OlPejeta who have lost part of their family today. Now, more than ever, we must stand together and protect our rhinos. pic.twitter.com/uTX2kmUjEL