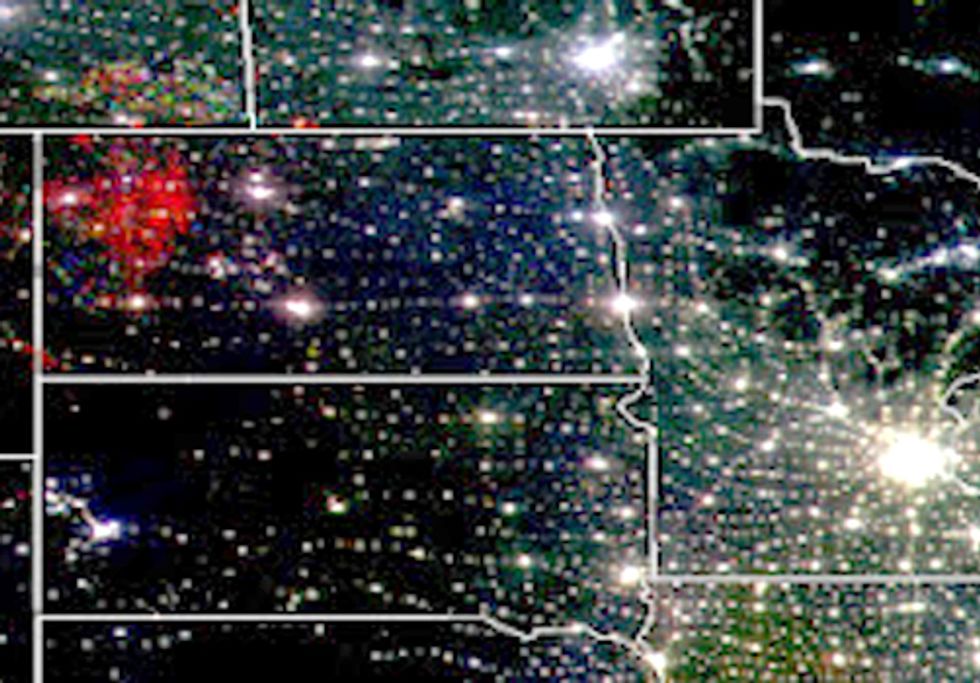 It has been mentioned often that the mining of tar sands in Alberta, Canada can be seen from space. Recent composite images from the Air Force’s Meteorological Satellite, brought to our attention by the great work at Skytruth.org, show another new form of North American oil production and its extensive reach and impact.

The red area in the image is the lights and gas flares from tight oil drilling in North Dakota, Montana and over the border in Canada. This was taken in 2010 when the tight oil boom had just gotten into full swing with production in North Dakota reaching 345,000 barrels per day at the end of the year. In January 2012, production there topped 545,000 b/d. The Energy Information Agency expects it to reach 750,000 b/d by 2015.

The image does not differentiate between lights that are burning at the facilities and gas flares that are burning off gas that is not being captured and sent to market. We know that more than a third of the gas produced in North Dakota was flared in 2011. That’s a practice that greatly increases the carbon footprint of producing oil in North Dakota and is symptomatic of the tight oil boom that is going on there.

Tight oil is a relatively new form of oil production that uses the same technique of horizontal drilling and hydraulic fracturing (fracking) as the more widely known shale gas production that has caused so much controversy in New York, Pennsylvania and elsewhere. Shale gas production has become so prolific in America in the last five years that the price of natural gas has crashed, leading many drillers to refocus on drilling for oil instead.

The tight oil resources have led drillers into new territory where the infrastructure needed to process, store and transport natural gas has not yet been built. With oil prices constantly pushing upwards, drillers don’t wait around for pipelines and storage tanks to be built, they want to get drilling and start cashing in as soon as possible. So when natural gas comes up the well with the oil (this is known as ‘associated gas’), as it often does, they burn it.

North Dakotan officials and the industry say they are working on building the infrastructure to pipe the natural gas to market and reduce the flaring but there are two problems with this.

First, the decline rate on tight oil wells is very high. This means that the flow of oil from the well declines to a relative trickle typically after about a year. The result of this is that the drillers move on quickly in search of new pastures. So the infrastructure to pipe the gas away will often be struggling to catch up, arriving too late for the bulk of the gas and in some cases may not be worth putting in at all.

Secondly, as I mentioned above, the current proliferation of shale gas has decimated the price of gas in North America. This seriously undermines the incentive to invest in the pipelines and tanks to bring the gas to market. In many cases it may simply be cheaper to flare.

The tight oil boom is looking typical of many resource booms that have come before—a rush to develop a natural resource as quickly as possible that will make some people a lot of money. But the impacts on communities, the environment and the atmosphere are often overlooked until the drillers move on and leave communities to deal with the legacy.

The tight oil boom is just getting going and it’s primarily going on in a relatively remote and underpopulated part of the country. However, it won’t be long before this production method spreads to Ohio, Colorado and many other new areas. Some in the industry see this production method rising to 2, 3 and maybe 4 million barrels per day over the next couple of decades.

Are we ready for a boom that big? And what are the climate implications of opening another new pool of carbon as we reach the limits of our atmosphere’s ability to absorb greenhouse gases? These are themes we will be returning to here on the Price of Oil blog. So watch this space.