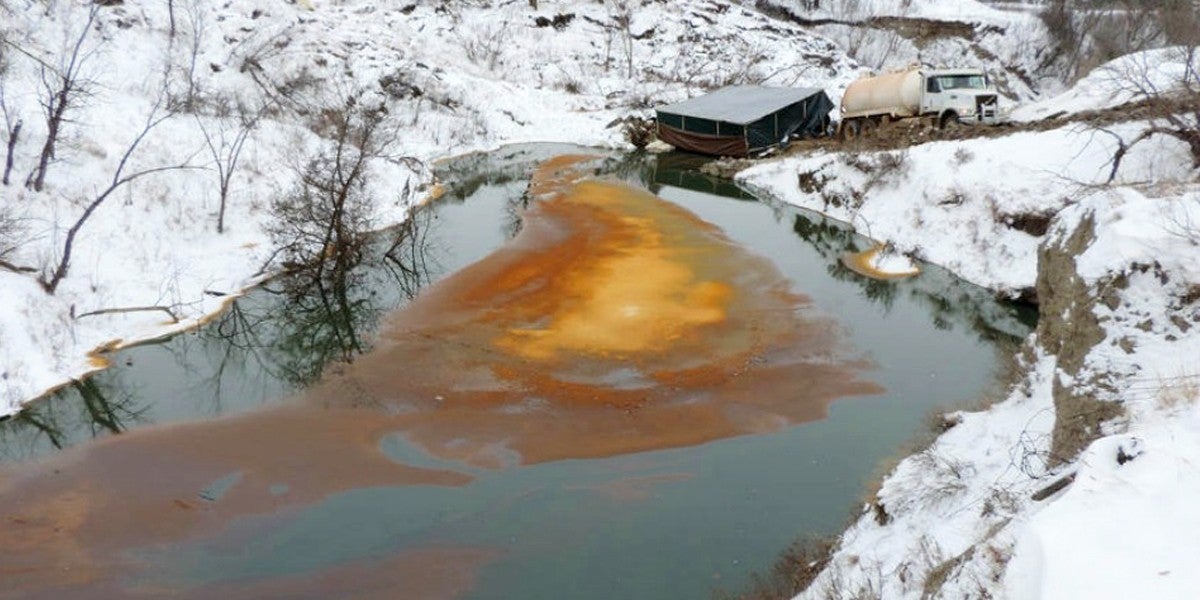 The amount of crude oil that spewed near Belfield, North Dakota from the ruptured Belle Fourche pipeline in December was vastly underestimated.

The original estimate was around 176,000 gallons of oil. After further review, pipeline operator True Companies now reports about 12,615 barrels (529,830 gallons) of oil spilled, spokeswoman Wendy Owen told Inforum. The cause of the leak has not been determined.

The spill contaminated a hillside and Ash Coulee Creek which empties into the Little Missouri River. The break was also significant because it happened less than 200 miles away from the Oceti Sakowin Camp, where Water Protectors were protesting the heavily contested Dakota Access Pipeline (DAPL).

The new number makes the Belle Fourche spill one of the largest in state history and perhaps the largest oil pipeline spill that contaminated a North Dakota water body, Bill Suess, spill investigation program manager for the state’s Department of Health, told Inforum.

North Dakota’s largest spill happened in September 2013 when a Tesoro Corp. pipeline leaked about 840,000 gallons of fracked oil in a wheat field near Tioga, causing one of the biggest onshore oil spills in recent U.S. history. That spill has still not been cleaned up more than three years later.

Additionally, based on data from Hart Energy, the revised estimate makes the Belle Fourche Pipeline spill the largest pipeline leak in all of 2016. Second place now goes to Sunoco Logistics—a DAPL operator—which spilled 8,600 barrels of oil from its Permian Express II Pipeline near Sweetwater, Texas in September.

Cleanup of the Belle Fourche Pipeline bust is still ongoing. “We continue to work on the recovery and the cleanup. We will be there until this is finished,” Owen said.

Traces of benzene, a petrochemical solvent linked to cancer, have been detected throughout Ash Coulee Creek, Suess said.

Earlier today, the Trump administration granted a presidential permit to TransCanada for its $8 billion Keystone XL pipeline which will carry Alberta tar sands to processing and export facilities in the southern U.S.

On Jan. 24, President Trump signed an executive order making it easier for both the Keystone XL and the DAPL to go forward.

Despite repeated safety assurances from the industry, breaks happen. EcoWatch mentioned in October that 220 significant pipeline incidents occurred in 2016 and 3,032 since 2006.

“Pipelines spill; it’s not if, it’s when,” Dallas Goldtooth, an organizer with Standing Rock and the Indigenous Environmental Network, said in reaction to the Belle Fourche spill in December. “And the state-of-the-art ‘leak detectors’ the pipeline companies always tout don’t work.”

As EcoWatch reported, the Belle Fourche Pipeline Co. is part of the family-owned True Companies, which also operates Bridger Pipeline LLC. Both pipelines are operated from the same control room in Casper, Wyoming. From 2006 to 2014, Belle Fourche reported 21 incidents, leaking a total of 272,832 gallons of oil. Bridger Pipeline recorded nine pipeline incidents in the same period, spilling nearly 11,000 gallons of crude.

A Belle Fourche pipeline that spilled 12,200 gallons in May, 2014 occurred on Bureau of Land Management (BLM) land near Buffalo, Wyoming. It was later discovered that Belle Fourche did not have a permit to operate the land. Sister company Bridger was fined $27,029 for trespassing by the BLM.

Bridger was also responsible for dumping up to 50,000 gallons of crude into the Yellowstone River in 2015.