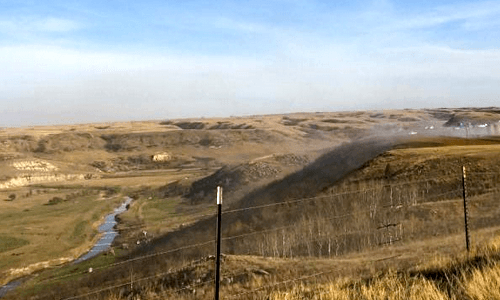 Oil and saltwater are still spilling at an “out of control” rate from a North Dakota oil well owned by Oasis Petroleum Inc. that blew out over the weekend, UPI reports. So far, more than 67,000 gallons of crude and roughly 84,000 gallons of saltwater-brine (a toxic byproduct from the oil and gas drilling process) have leaked, according to Reuters.

Despite the company’s weekend-long efforts to regain control, the well has still not been capped since the 11 p.m. blowout on Saturday.

The well site is located in Mountrail County, approximately 15 miles south of the city of White Earth. The North Dakota Department of Health said that the spill has impacted a nearby river.

“Oasis is working to regain control of the well, but as of 8 a.m. Monday, Oct. 19, the well had not been shut in,” the department said. “A light sheen was observed on the White Earth River approximately 850 feet north of the well pad.”

Booms have been placed to stem the flow of the spill material from migrating downward.

Mountrail County sits on top of the Bakken and Three Forks shale formations, a core area for the state’s booming oil and gas productions. However, you may recall that both the devastating effects of North Dakota’s dirty energy production and Oasis Petroleum were put under the microscope on a recent episode of Last Week Tonight with host John Oliver. The oil company in question owned a well that killed two contractors in 2011 due to a blowout.

While the exact cause of the latest Oasis well blowout is still unknown, state officials suggested that it may be linked to hydraulic fracturing, aka fracking, of a nearby well.

The Bismark Tribune reported: “The incident was caused when Oasis hydraulically fractured another nearby well, apparently causing this one to blow, even though it had been shut in to safeguard against exactly that outcome, according to Oil and Gas Division spokeswoman Alison Ritter. She said oil companies have to provide notice when they’ll be fracking within 1,300 feet of an existing well, so operators can take necessary precautions.”

UPI also reported that vandalism might have been a factor. “The spill was discovered on Oct. 16 and is suspected to have been caused by vandalism,” the state said. “Seals were broken on two tanks that contained the oil.”

Reuters reported that this blowout was unlike others, as it “did not produce a geyser of crude but a smaller burst roughly 5 feet (1.52 m) in height that sprayed oil onto the well pad.”

“This is not your typical blowout,” Bill Suess of the state’s Department of Health told the news organization.

Oasis told Reuters it was working “to ensure that safe and thorough remediation efforts are completed in a timely fashion.”

State officials said that the company is trying to cap the well by pumping in a thick mixture of mud and clay.