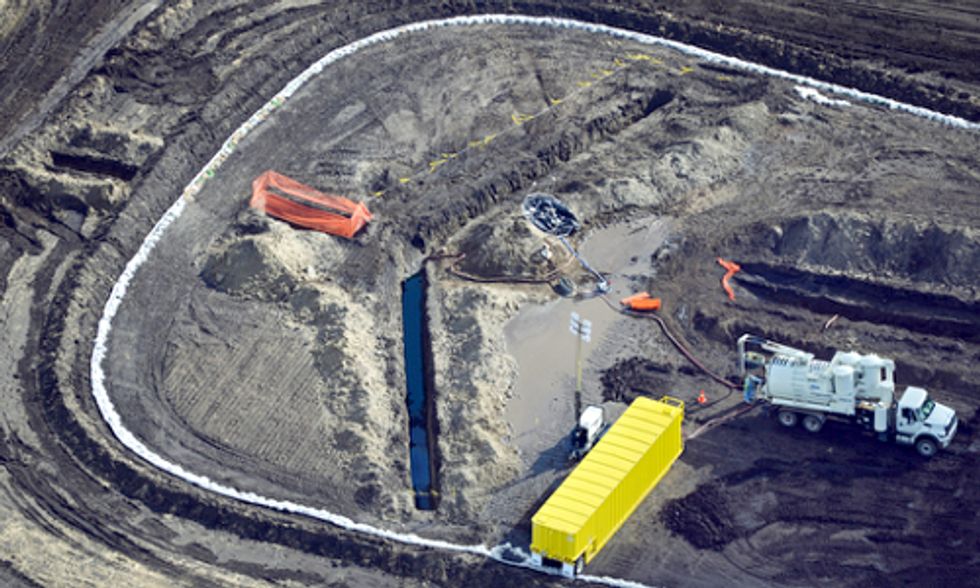 A September oil pipeline spill is calling into question North Dakota’s lack of disclosure laws, which have allowed nearly 300 spills in the last few years to go unreported in the burgeoning oil state.

In 2012 and 2013, roughly 300 pipeline spills in the state went unreported, according to an Associated Press (AP) report that also uncovered roughly 750 oil incidents that had previously not been publicized.

According to state law, that’s just fine. There are no regulations in North Dakota regarding the disclosure of oil spills to the public.

The AP report comes just weeks after a North Dakota farmer uncovered a pipeline rupture on his land. Steven Jensen discovered the actual site of the pipeline spill after days of smelling oil. Jensen immediately reported the incident, he told the AP, but the pipeline’s owner, Tesoro Logistics, took a day to arrive on the scene.

At that point, more than seven acres of Jensen’s land were destroyed in what is considered one of the largest inland oil spills in the U.S. In all, 20,000 barrels—or 800,000 gallons—of crude oil leaked onto his farmland.

The incident was reported to the National Response Center on Oct. 8. News of the spill didn’t break for two days, and finally made headlines on Oct. 10—11 days after the initial report by Jensen was filed.

For those living in the state, this is a problem on a number of different levels. Not only did the regulators fail to notify the public, but there are also questions over whether the spill had any environmental consequences. Tesoro Logistics claims the spill did not result in any contamination of soil or groundwater.

“First, why was the public not informed about such a significant oil spill until Oct. 10? That is a long time since September 29, when the spill was reportedly discovered, to have kept the public in the dark about what was happening,” the organization stated in a press release. “Second, from all accounts in the media thus far, state officials and company spokespeople have said that the spill has not caused any adverse damages to the environment. This defies logic and common sense. Productive agricultural land—seven football fields in size—is covered in oil and the official response is no environmental damage?”

Currently, all spills that have the possibility of tainting water sources must be reported to the North Dakota Department of Health. According to its website, reporting the incident is mandatory. However, penalties for failing to do so are not listed.

On Friday, the Department of Health indicated it would test out a reporting website, which would provide an accessible database for the public to monitor reported oil spills in the state. As it stands now, the public does not have access to those reports.

Creating a system that allows for transparency isn’t supported by everyone.

According to AllGov, the state’s Department of Mineral Resources director Lynn Helms worries that reporting each and every oil spill, regardless of size, will create unnecessary concern.

That’s echoed by North Dakota Department of Health’s Kris Roberts, who is working on the Jensen farm oil spill cleanup effort with Tesoro Logistics. From his perspective, alerting the public every time a spill occurs isn’t the best use of time and resources, particularly if they’re not yet aware of the ramifications of the spill.

“It’s on top of a low hill, in the middle of a wheat field, in an area with no residents at all,” Roberts told the LA Times. “The public has a right to know. But do I have a responsibility to run out and tell the public every time there’s a spill that isn’t going to threaten them or the environment, and that the company is aggressively cleaning up?”

Yet for those who are concerned about receiving an accurate depiction of what is happening in the state, that’s backwards logic.

“The public really should know about these,” Dakota Resource Council Director Don Morrison told AllGov. “If there is a spill, sometimes a landowner may not even know about it. And if they do, people think it’s an isolated incident that’s only happening to them.”

Morrison’s organization takes issue with an industry that, in their eyes, lacks effective regulation.

“This latest spill should put to rest the calls for fewer regulations,” the organization states in a press release, referring to the Jensen farm spill. “It is hard to imagine how fewer regulations would have prevented this spill, made it more transparent to the public or sped up the cleanup. It also puts the spotlight on current state government claims that it is uniquely qualified to deal with energy development in our state.”

Other states that are in the midst of oil booms do have databases the public can consult for oil spills. In Colorado, where fracking has taken off, the Colorado Oil and Gas Conservation Commission, a division of the state’s Natural Resources department, is responsible for providing permits and monitoring the fracking industry, publishes spill reports on its website.

The industry has long stated that oil pipelines provide a safe way to transport oil and natural gas throughout the U.S., yet the cases in North Dakota call that argument into question.

While many of the 300 pipeline spills over the last two years in the state have remained relatively small, they’ve still occurred—exposing farmland and water sources to crude oil, which has the capability of contaminating soil and water.

Most pipelines are fitted with technology that monitors fluid flow, capable of detecting when a spill is occurring. The technology recognizes imbalances in fluid, and sends out an alert when such imbalances are detected. But the technology doesn’t always work.

In cases where leaks are relatively small, oil spills can go for weeks without detection. In the case of the Jensen farm oil spill, Tesoro Logistics is still unable to answer how long the spill occurred—all Jensen knows is that he smelled oil days before his tractor traveled over a contaminated patch, which will him to the source of the leak.

The controversy in North Dakota, which is the second largest oil producing state in the nation, comes in the midst of the Keystone XL pipeline controversy. The proposed 1,800-mile pipeline would pump Canadian tar sands from Alberta to the Gulf of Mexico, passing through some of the nation’s richest farmland.

Farmers in Nebraska have been vocal opponents to the proposed pipeline, citing concerns over eminent domain and scenarios like Jensen experienced in North Dakota.

Abbi Harrington-Kleinschmidt, a Nebraska farmer whose land sits along the proposed Keystone route, told Mint Press News in July that she and her fellow Nebraska farmers would do all they could to fight Keystone. Like others, she’s concerned about the potential for oil spills on her land, which she considers to be some of the best soil in the nation.

“It just goes right to my core, probably because of the legacy that ties to my family for five generations,” she told Mint Press News. “And knowing that my ancestors who worked so hard—and my sisters and I, who have shed a lot of blood, sweat and tears on that farm too. What’s so upsetting is that a foreign corporation can threaten to come and take your land from you with such a dangerous pipeline.”

President Barack Obama has the final say on the pipeline’s approval. A date for his decision has not yet been made, although it is expected within the year.