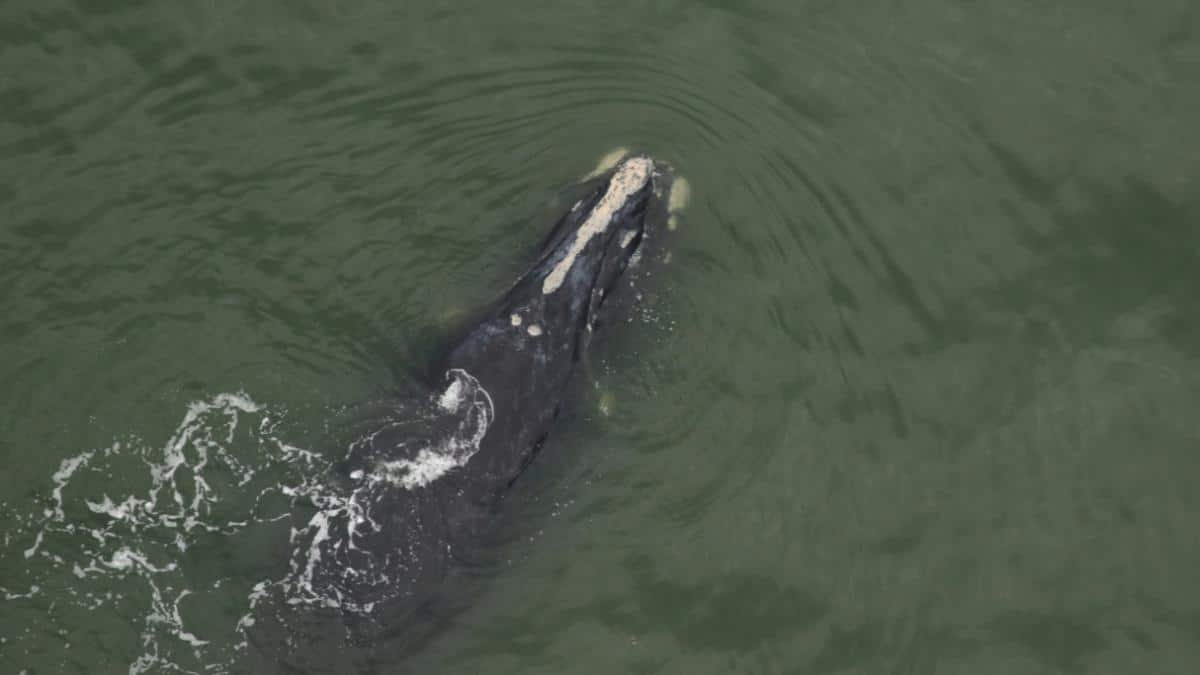 Like most of us, North Atlantic right whales have not had a very good 2020. First, a National Oceanic and Atmospheric Administration (NOAA) report found that there were no more than 366 of the critically endangered species left. Then, the first known baby born this calving season washed up dead on a North Carolina beach. But things are finally starting to look up.

Two live right whale calves were spotted off the coasts of Georgia and Florida within the last week.

“During our third survey of the season, CMARI aerial observer Marcy Lee sighted a whale. She knew in that moment it was a North Atlantic right whale calf. The first large whale of the season and it was a calf! Soon enough the team knew the mother would surface for a breath of air and the calving season would have the first live mother-calf right whale pair,” White told Click Orlando.

The new calf was born to a first-time mom named Chiminea, who is 13 years old, NOAA Fisheries Southeast tweeted.

We have a first time mom! The first live right whale calf of the season was spotted by biologists with @CMAquarium off Cumberland Island, GA December 4. Mom is known right whale ‘Chiminea.' Chiminea is at least 13-years-old and this is her first known calf. Photo: @CMAquarium pic.twitter.com/khcGrCSDOC

The second calf was spotted Monday off of Florida’s Vilano Beach by the Florida Fish and Wildlife Conservation Commission (FWC), according to NOAA. This is the second calf for a 16-year-old mother named Millipede. The new calf was seen swimming with a pod of bottlenose dolphins.

Great news! Yesterday, the second live right whale calf of the season was spotted (swimming with a pod of bottlenose dolphins) off Vilano Beach, FL by @MyFWC Mom is known to biologists as 'Millipede.' She is 16-years-old and this is her second calf. Photo: @MyFWC pic.twitter.com/LQZRUZ32YC

While the births are a bit of good news for the species, they do not mean that North Atlantic right whales are out of danger. FWC warned that calving season is an especially vulnerable time for the whales.

“Every winter, many right whales travel more than 1,000 miles from their feeding grounds off Canada and New England to the warm coastal waters off the southern United States,” the FWC Fish and Wildlife Research Institute wrote on Facebook. “These waters are where right whales give birth and nurse their young. This is a vulnerable phase, making it extremely important for boaters to be aware of the whales’ presence and tendency to rest near the surface of the water. #GiveThemSpace.”

North Atlantic right whales have long faced danger from human activities. The very name “right whale” comes from the fact that they were the “right” whales to hunt, because they swim slowly and close to the shore and do not sink when they die, USA TODAY explained. They were hunted nearly to extinction, but began to make a comeback after whaling was banned. Today, that comeback has reversed.

“Recovery had been slow and steady until 2010 when we started to see a decline. Most recent population models show that the numbers are declining again for various reasons including a slow reproduction rate, threats from entanglement in fishing gear, collisions with large vessels, and possibly other factors not yet identified” CMARI Executive Director Dr. James Powell told Click Orlando.

Last year, the species gave birth to 10 calves, USA TODAY reported. This was three more from the previous year, but scientists say the species needs to average 20 calves a year to survive.

To give the species a chance at survival, more than 55 conservation groups sent a letter to Congress Dec. 3 urging lawmakers to free up 0 million in emergency funding for their protection, including the development of ropeless fishing gear.

“The right whale is one of the most endangered species on the planet, and the population has now reached crisis status,” the letter read. “These iconic whales desperately need additional recovery funding to prevent them from becoming extinct.”