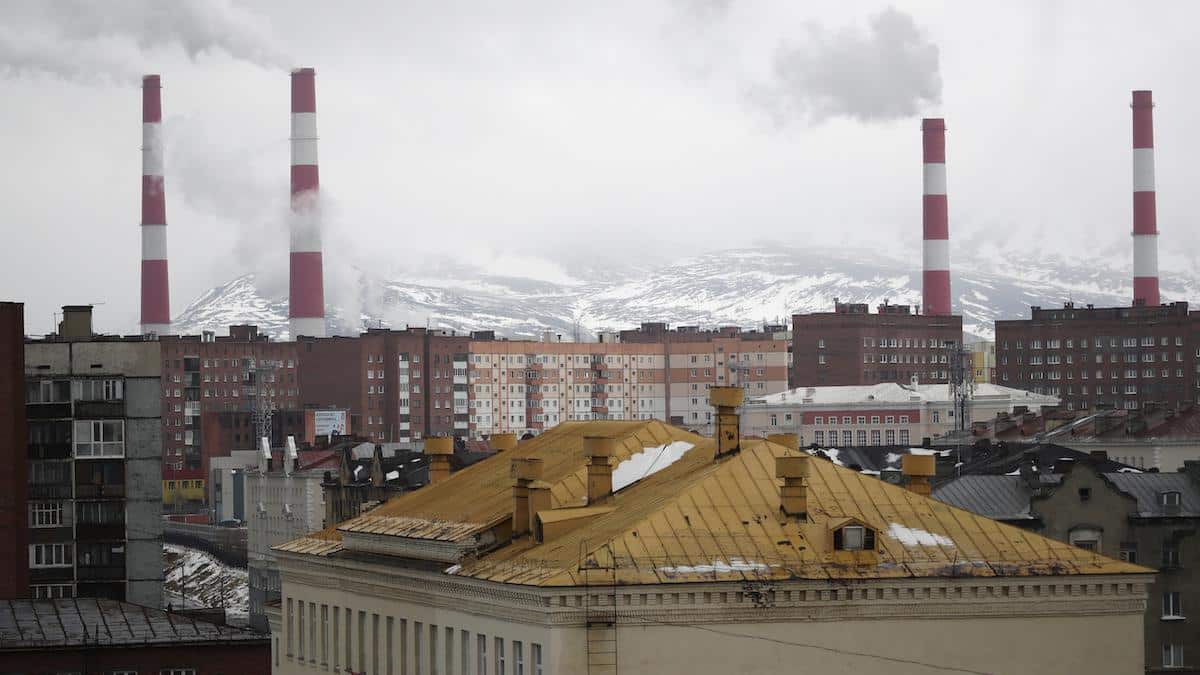 The Norilsk power plant No. 1 supplying electricity to industrial enterprises of the Norilsk Nickel company, the world's largest producer of palladium and one of the largest producers of nickel, platinum and copper, in Norilsk, Russia on Oct. 18, 2021. Kirill Kukhmar TASS via Getty Images

In Norilsk, the northernmost city in the world, the Arctic is warming twice as fast as the rest of the world, but the permafrost and structural problems have not been caused by climate change alone.

A smelting company has polluted rivers and destroyed boreal forest.

Norilsk, population 176,000, is known by environmentalists and the Russian Federation government as one of the most polluted places on Earth. According to The Atlantic, the life expectancy there is ten years less than in other regions of Russia, respiratory diseases are widespread and the risk of cancer is two times higher. The culprit is Norilsk Nickel, a company that produces more palladium and high-grade nickel than any other in the world. It is also a major producer of cobalt, platinum and copper.

“Norilsk Nickel outlasted communism, embraced capitalism and now aims to ramp up production to sell the high-purity metals needed for batteries and other technologies of the 21st century clean energy economy,” reported Marianne Lavelle in Inside Climate News. “The company’s ambitions coincide with those of Russian President Vladimir Putin for greater development in the Far North, which he maintains can be accomplished sustainably.”

The pollution caused by the company has turned one of the world’s biggest carbon sinks into a wasteland of dead and dying forest in the taiga, or boreal forest. The company produces the worst sulfur dioxide in the world and last year a holding tank gave way, releasing 6.5 million gallons of diesel fuel that flowed into the Kara Sea, the biggest Arctic oil spill in history. The company denies that any diesel made it into the Arctic, but “the Russian government’s fisheries agency told Inside Climate News that its testing showed that the contamination had reached that far,” according to NBC News.

Norilsk Nickel says that it can rehabilitate the environment. The company paid a $2 billion fine for last year’s diesel spill, the largest environmental fine in the Russian Federation’s history. The company has promised over $5 billion for pollution control and economic and social revitalization throughout the territory of Krasnoyarsk Krai, according to Inside Climate News.

“We do acknowledge that there are legacy issues relating to our business,” a spokesman for Norilsk Nickel said in reference to lingering problems from the Soviet era, as reported by Inside Climate News. “We are implementing far-reaching measures to address them.”

A new environmental strategy was approved by Norilsk Nickel this year with goals for cleaning up air, water, soil and waste, as well as addressing climate change and biodiversity issues.

In a project called Sulfur Programme 2.0, the company has said it will spend at least $4.1 billion to deal with air pollution and has committed to reducing Norilsk’s sulfur dioxide pollution by 45 percent by 2023 and by 90 percent by 2025.

Considering Norilsk Nickel’s track record of pollution and inaction on cleanup even after paying its fine, local residents like Igor Klyushin, who moved to Norilsk in 1977 and used to fish with his father for grayling in the area, is skeptical. Klyushin advocated with other local environmental activists for Russia’s environmental protection agency, Rosprirodnadzor, to establish a presence in Norilsk, as reported by Inside Climate News.

“When I came that night to see the Daldykan, my heart really sank, and it was broken,” Klyushin said, speaking by phone through an interpreter, two weeks after filming the polluted Daldykan River, as reported by Inside Climate News. “The river was red with pulp and the chemical smell is still in my lungs.”