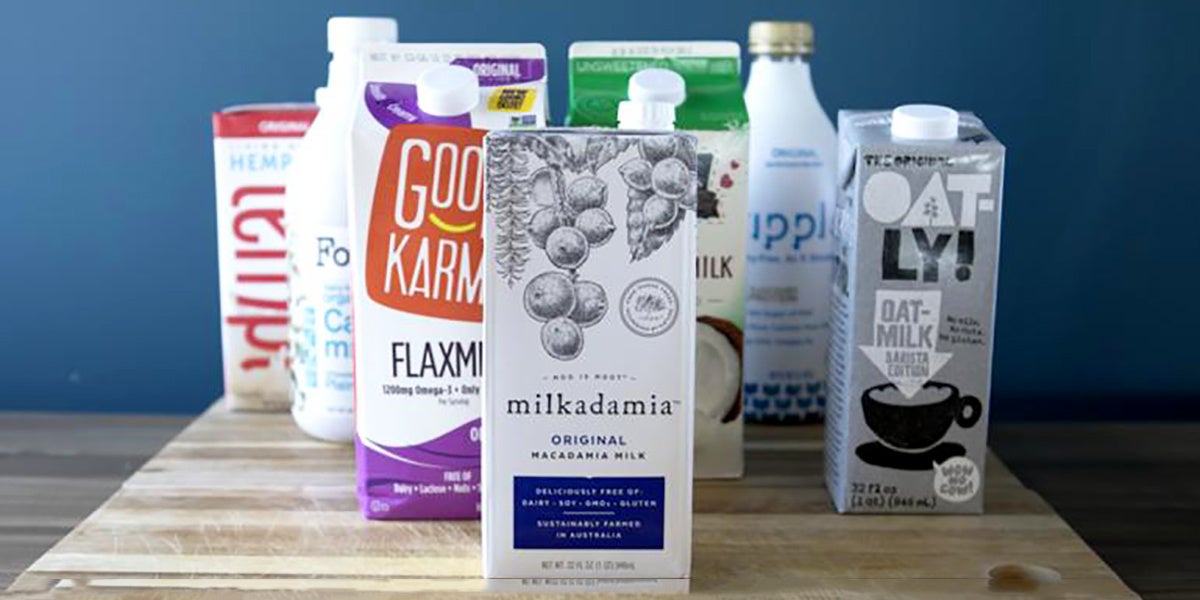 More and more, ecologically minded milk consumers are turning to nondairy products to minimize their carbon hoofprints. Sales of almond milk shot up by 250 percent between 2011 and 2016. Meanwhile, consumption of dairy milk has plummeted 37 percent since the 1970s, according to the USDA.

This is because animal agriculture consumes 2,422 billion cubic meters of water annually (about one-fourth of the global water footprint), 19 percent of which is related to dairy cattle. The Food and Agricultural Organization estimates that the dairy industry contributes 4 percent of human-caused greenhouse gas emissions—52 percent of which is methane, which can trap up to 100 times more heat than carbon dioxide.

In recent years, however, popular milk alternatives like soy and almond have come under increased environmental scrutiny. Besides the controversy surrounding soy milk’s health effects, many soy products are produced with high-spray, intensively farmed and genetically modified crops—some of which are grown in tracts of the Amazon Rainforest that were razed to meet demand for soy. Meanwhile, each nut in almond milk requires 1.1 gallon of water to grow, most of which is sourced from the drought-susceptible state of California.

The good news is, there are some exciting new milk alternatives in town. Sierra sampled the taste—and sustainability bona fides—of seven such alternative milk varieties: flax, macadamia, pea, coconut, cashew, hemp and oat. Each milk was tested according to the four ways in which it’s most likely to be consumed: directly from a glass, swirled into coffee, dunked with a cookie (for the purposes of this taste test, Uncle Eddies Vegan Peanut Butter and Chocolate Chip Cookies, recommended by the attendant at Whole Foods), and poured over cereal (Annie’s Homegrown Organic Berry Bunnies).

A disclaimer: The data on the ecological integrity of alternative milk varietals is not robust, and much of what exists has been put forth by the producers themselves. Nevertheless, all plant-based options are more ecofriendly than dairy, and many new alternative milk products are sourced with eco-sustainability in mind. Whether you’re a lifelong vegan looking to mix it up or a reformed dairy guzzler trying to reduce your carbon footprint, this taste test will guide you through the most cutting-edge milk alternatives on the market.

Though somewhat thinner in consistency than a glass of conventional dairy milk, Good Karma‘s Original Flax Milk had a pleasant, slightly sweet smell and taste. Flax milk blends nicely into coffee—it mitigates some of its natural acidity and leaves no discernible taste. However, it proved fundamentally incompatible with carbs—the dunked cookie could only be described as “damp,” and mixed with cereal, this flax milk assumed a less-than-appetizing grayish tinge. We could, however, certainly drink a full glass of Good Karma’s Vanilla Flax Milk, which is slightly more flavorful than the original and provides a complete daily dose of omega-3s. As for the company’s Unsweetened Plus Protein version—an all at once chalky yet soapy concoction—not so much. However, the latter would, perhaps, be less offensive mixed into a turbo-charged protein smoothie.

Rich and thick, with just a hint of that creamy macadamia nut flavor, Milkadamia‘s Macadamia Nut Milk is the crème de l’alternative crème. Arguably the hottest new alternative milk to crack the market, it poured with an almost perfect, milklike consistency and appeared velvety white and slightly flecked, like a fancy vanilla bean ice cream. The dunked cookie was subtly softened and slightly sweetened; the cereal echoed its solvent’s notes of vanilla. Milkadamia’s Barista Formula is arguably better than regular milk in coffee—you’ll enjoy the rich caramel hue, not to mention the hints of shortbread that linger on the tongue.

Even better, Milkadamia is especially focused on the sustainability of its product. The nuts are sourced from Jindilli Farms in Australia, which according to the company, boasts “abundant rainfall, ample sunshine, rich soil and low-impact farming.” Milkadamia claims its focus is regenerative farming, which aims to rebuild soil health. Its macadamia nuts grow on so-called free-range trees that do not require irrigation. Transporting the product to California from Down Under, however, surely generated its own set of environmental impacts.

Once you’ve stopped giggling over the phrase “pea milk,” there are some serious environmental benefits to consider here. Yellow peas (cue stray giggles) grow in areas that get lots of rain (in Ripple‘s case, France, so some shipping considerations should be taken into account), meaning they need little or no irrigation. As legumes, they also naturally fix nitrogen in the soil, which helps set the stage for the next crop without the use of artificial fertilizers. Ripple, which also makes its bottles from 100 percent post-consumer recycled plastic, is using venture capital to lead the pea milk revolution.

Unfortunately, these taste testers are not joining in. The viscous, beige liquid smelled musty and tasted mustier. If you can stomach those thick, slimy dregs, the burnt rubber aftertaste should be enough to put you off of pea milk. Its unfortunate taste came through even stronger on cereal—not even trusty Berry Bunnies could save our taste buds. The bunnies looked blissfully buoyant at first, but the gritty taste somehow permeated every one of their pores. In coffee, the pea milk separated like the oil and water in a grade-school science experiment. The milk begins marbled, and slowly floats to the top (not unlike your soul separating from your pea-milk-drenched taste buds). Somehow, it was least offensive on the cookie. It’s hard to taste the pea milk in the spongy dipped bits—but where is the joy in dunking a cookie if you can’t finish the glass?

Not to be confused with canned coconut milk used in curries, the Unsweetened Organic Coconut Milk beverage from So Delicious comes in a carton nearly indistinguishable from its lactose-laden brethren in the supermarket’s refrigerated aisle. Unlike dairy farming, coconut farming is relatively low impact, and coconuts may be able to sequester carbon in the soil and offset carbon dioxide production in the atmosphere, according to the Philippine Coconut Authority. Coconuts also require little water to produce, but they are often sourced from tropical areas and thus incur some impact from transportation.

If only this coconut milk could have transported us to a tropical island. Alas, this watery drink, which quickly separated into chalky particulates, has a flavor that can best be described as “aggressively neutral,” and the milk itself leaves a dustlike coating on the glass—in lieu of “legs,” an actual sommelier term for the streaks that form within drinking vessels. The cookie refused to retain any of the liquid from its dunk test. The strange metallic taste this milk bestowed on cereal rendered the Berry Bunnies nearly inedible. And it not only soured coffee, but also compromised its aesthetics by contributing sketchy-looking floating white flecks. Categorize this milk under “Does not play nicely with others.”

Cashews taste of salvation for awkward writers at fancy parties—”Oh good, a delicious snack for me to keep my hands busy”—but Forager‘s Unsweetened Plain Cashew Milk bucks the trend. It manages to be simultaneously smoky and bland, with a chalky aftertaste that coats the tongue. The blue-grayish tinge is amplified in the cereal, which became soggy and flavorless. Cashew milk made for a thin, watery, and flavor-compromising addition to a morning cup of Joe. The cookie escaped relatively unscathed, save for too-light saturation. But cashews, unlike almonds, grow in regions that are less water-scarce than California, and they thus exert less stress on the land. Also unlike the almond, the cashew is not technically a nut—it’s a drupe. By this fact, and by once-lofty expectations for cashew milk, we feel duped.

The misguided mid-century disdain for hippies centered mostly on a perception of their outsized affection for trees, propensity for flower crowns, and sartorial predilection toward hemp. That cartoonish image is right in one regard: hemp’s eco-credibility makes it a good choice for any tree hugger. Hemp does not require intensive farming. It is hardy, grows quickly, naturally suppresses weeds, resists many diseases, and requires little watering. This 20th-century hippie, however, couldn’t stomach hemp it in its liquid form. Tempt Hemp Milk tasted slightly of grass (no, not that grass—hemp milk won’t get you high) and leaves a lingering, sooty aftertaste. In coffee, without continuous and vigorous titration, it separates into a curdled, pock-marked suspension. The cereal and cookie are both overwhelmed by the taste. While we can’t help but hug every tree we see (and who doesn’t love a good flower crown?), we won’t be adding hemp milk to our dairy-free rotation any time soon.

“Wow, no cow!” boasts Oatly‘s expertly branded packaging. The marketing-savvy Swedish company combines humor and logic to tout the sustainability factor of its bovine-free milk—but can the taste compete with the cheek? Oat milk poured with the consistency of milk, but had a distinct and initially off-putting beige hue. Alone, oat milk tasted like the milk left behind at the bottom of a bowl of Cheerios. Naturally, it paired perfectly with cereal. It also complemented the cookie’s sweetness. The barista version, which supposedly steams very well, was especially nice in coffee, with just a hint of wheat and a warm, coating taste reminiscent of hot oatmeal on a chilly morning.

We hope this guide has proven helpful for your quest to quench your ecofriendly milk fix. In any case, we propose a toast to celebrate the ever-expanding array of options to meet your alternative dairy needs. Cheers!