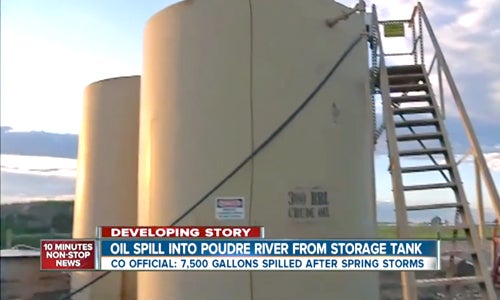 A storage tank attached to an oil well damaged by recent flooding spilled 7,500 gallons of crude oil into the Cache la Poudre River near Windsor in Northern Colorado, reported the Colorado Oil and Gas Conservation Commission (COGCC) late Friday afternoon. The oil well and tank are one of thousands that are placed too close to waterways in Colorado despite environmentalists’ attempts to fight the oil and gas industry and change state regulations to better protect Colorado’s lakes, rivers and streams. 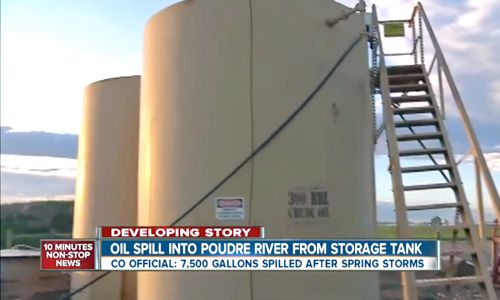 All the contents of the storage tank, 178 barrels of oil, spilled into the Poudre River. Photo credit: 7News Denver

The spill impacted vegetation a quarter-mile downstream, but it appears no drinking water has been affected by the spill, according to COGCC spokesman Todd Hartman.

“During the floods of 2013 this kind of damage occurred on a massive scale, but Governor Hickenlooper and the COGCC made no substantive changes in regulations to avoid this now or in the future,” said Gary Wockner who directs Poudre Waterkeeper, a local affiliate of the international Waterkeeper Alliance. “Until the people of Colorado wrestle power away from the oil and gas industry’s poisonous grip on our entire political system, this pollution of our waterways, homes and democracy will continue to occur.”

The spill was discovered by the tank’s operator Noble Energy and later reported to the COGCC. All the contents of the tank, 178 barrels of oil, spilled into the river. High river flows that undercut the bank where the storage tank was sitting way too close to the river, caused the tank to drop and breaking a valve.

Clean-up crews are trying to absorb the spilled oil and a vacuum truck removed oily water from a low-lying area near the tank, according to a local news report. This spill falls right in front of an election on Tuesday, June 24, for a local moratorium on fracking in the nearby city of Loveland, and at the outset of a statewide ballot initiative in the fall of 2014 to further limit fracking in Colorado. Radio, TV and newspaper airwaves are under a deluge of advertising by the oil and gas industry to try and stop the moratoriums and ballot initiatives.

“All you have to do is turn on the TV and watch the advertisements right now—millions of dollars are being spent by this industry poisoning our political system so that they can poison our waterways and homes to earn the greatest possible profit in the shortest possible time,” said Wockner.