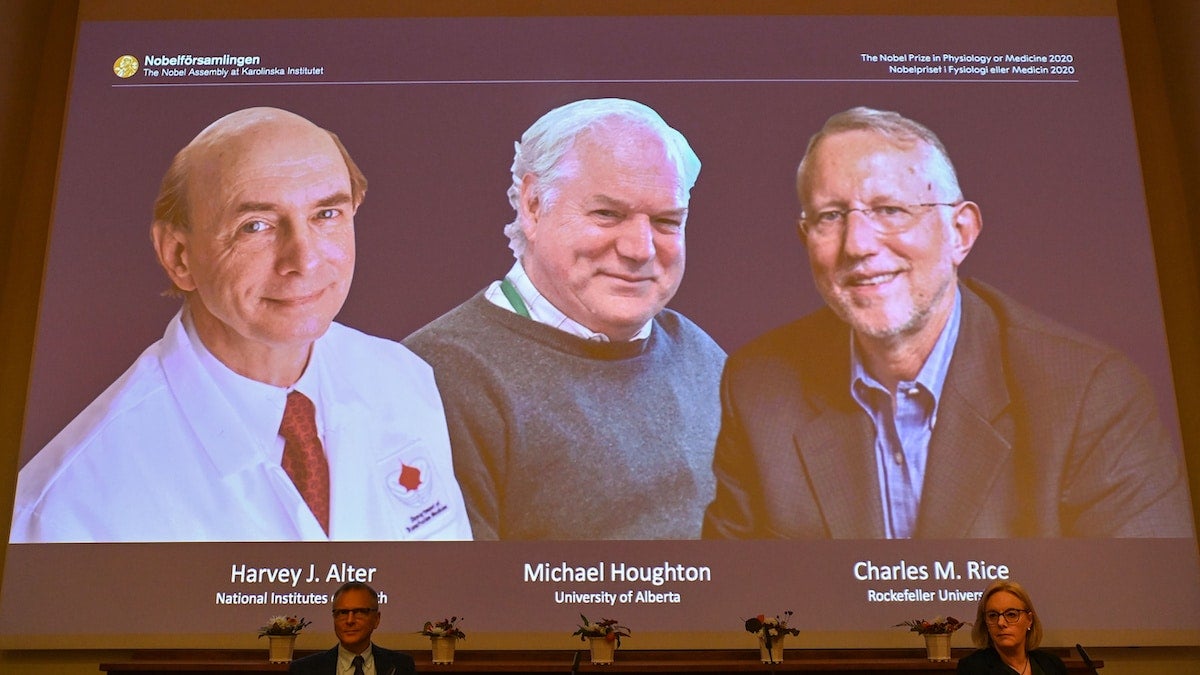 The Nobel Assembly announces the three winners of the Nobel Prize in Physiology or Medicine on Oct. 5, 2020. JONATHAN NACKSTRAND / AFP via Getty Images

As the world continues to battle one deadly virus, the Nobel Assembly is honoring three scientists who discovered another.

The assembly announced Monday it was awarding the Nobel Prize in Physiology or Medicine to Harvey J. Alter, Michael Houghton and Charles M. Rice for the discovery of the Hepatitis C virus.

“Prior to their work, the discovery of the Hepatitis A and B viruses had been critical steps forward, but the majority of blood-borne hepatitis cases remained unexplained,” the Nobel Assembly said in a statement. “The discovery of Hepatitis C virus revealed the cause of the remaining cases of chronic hepatitis and made possible blood tests and new medicines that have saved millions of lives.”

BREAKING NEWS:
The 2020 #NobelPrize in Physiology or Medicine has been awarded jointly to Harvey J. Alter, Michael Houghton and Charles M. Rice “for the discovery of Hepatitis C virus.” pic.twitter.com/MDHPmbiFmS

The three researchers each contributed to solving a deadly medical mystery.

Hepatitis, or liver inflammation, is typically caused by viral infections. By the 1940s, researchers had discovered two: Hepatitis A, which is food-and-water-borne and does not typically cause lasting harm, and a blood-borne hepatitis that can cause cirrhosis and liver cancer. In the 1960s, scientists identified one blood-borne virus that they called Hepatitis B. But, after diagnostic tests and a vaccine were developed, people continued to catch a form of hepatitis after blood transfusions.

What follows is a timeline of how the winning researchers uncovered the culprit, according to BBC News.

1972: Professor Harvey Alter discovered while working at the National Institutes of Health (NIH) that people were still getting liver disease after blood transfusions. He injected chimpanzees with the blood of infected patients and showed that the chimps also developed the disease.

1989: While working at the pharmaceutical firm Chiron, professor Michael Houghton isolated the genetic sequence of the mystery virus, which was then called Hepatitis C.

1997: Professor Charles Rice conducted an experiment at Washington University in St. Louis in which he genetically engineered a Hepatitis C virus and injected it into a chimpanzee, proving that the virus did in fact cause hepatitis.

The discoveries enabled the creation of diagnostic tests for Hepatitis C, which have stopped it from being passed through transfusions in much of the world, the Nobel Assembly explained. Further, the findings have made possible the development of antiviral treatments. While blood-borne hepatitis still claims more than a million lives a year, the winners’ work may contribute to a world in which that is no longer the case.

“For the first time in history, the disease can now be cured, raising hopes of eradicating Hepatitis C virus from the world population,” the assembly wrote.

The scientists all kept on researching after their discoveries. Alter continues to study Hepatitis C and other blood transfusion risks at the NIH. Houghton is a virology professor at the University of Alberta, Canada, where he directs the Li Ka Shing Applied Virology Institute, The New York Times reported. Rice teaches at Rockefeller University in New York and directed its Center for the Study of Hepatitis C from 2001 to 2018.

Nobel Assembly secretary-general Thomas Perlmann told BBC News he was only able to reach Rice and Alter with the news of their win.

“They were definitely not sitting by the phone because I called them a couple of times before without any answer,” Perlmann said. “But once I reached them, they were extremely surprised and they were really happy and speechless almost, so it was really fun to talk to them.”