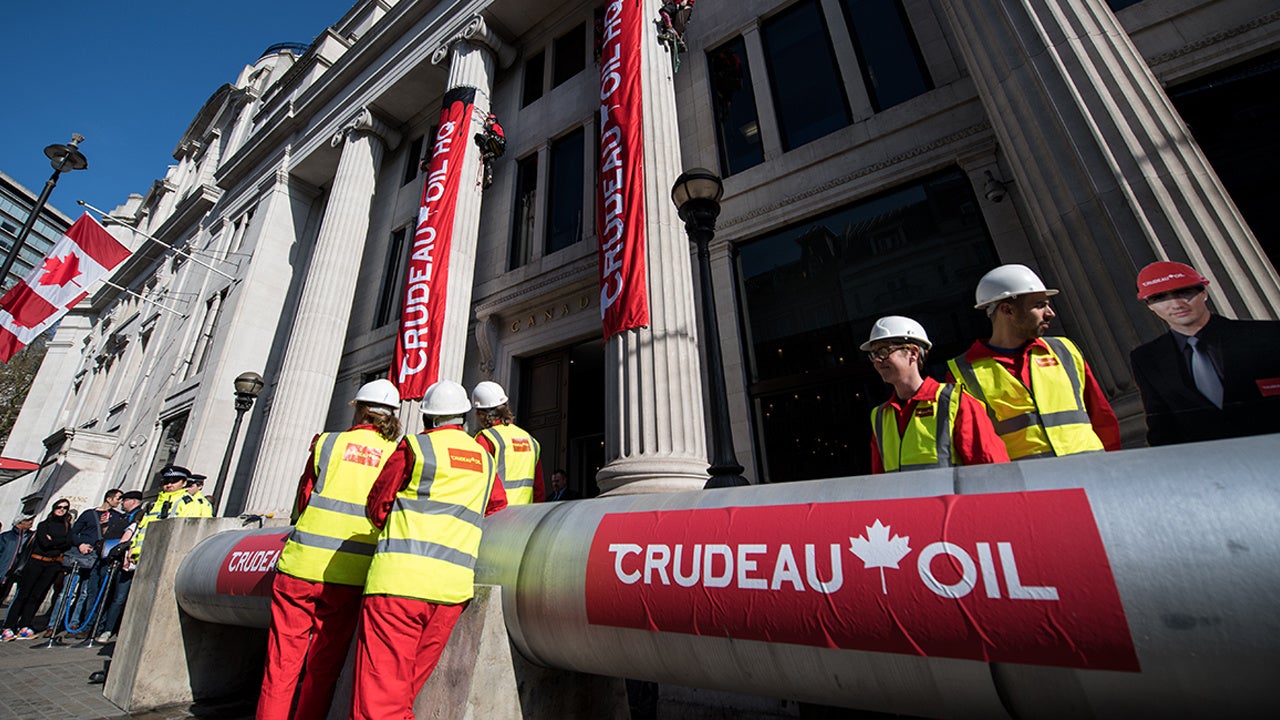 Greenpeace activists unfurl banners after building a wood and card 'oil pipeline' outside the Canadian High Commission, Canada House, to protest against the Trudeau government's plans to build an oil pipeline in British Colombia on April 18, 2018 in London. Chris J Ratcliffe / Getty Images

“The importance of leadership in the coming few years cannot be understated,” reads the letter, published Friday in the Guardian’s opinion section. “Governments are lagging scandalously behind what science demands, and what a growing and powerful people-powered movement knows is necessary.”

“There is enough carbon embedded in already operating oil, gas, and coalfields and mines to take us beyond 2°C, let alone 1.5°C,” the letter continues, referencing key temperature targets of the 2015 Paris climate accord. “The implications of this are clear: there is no room for expansion of the fossil fuel sector. There is no room for the Teck Frontier tar sands mine.”

Projects that enable fossil-fuel growth at this moment in time are an affront to our state of climate emergency, and the mere fact that they warrant debate in Canada should be seen as a disgrace." #RejectTeck #Imagine2050https://t.co/BVactubGSX

According to the letter:

Projects that enable fossil fuel growth at this moment in time are an affront to our state of climate emergency, and the mere fact that they warrant debate in Canada should be seen as a disgrace. They are wholly incompatible with your government’s recent commitment to net-zero greenhouse gas emissions by 2050. And with clear infringements on First Nations rights, such projects fly in the face of rhetoric and purported efforts towards reconciliation.

The response to the climate crisis will define and destroy legacies in the coming years, and the qualifications for being on the right side of history are clear: an immediate end to fossil fuel financing and expansion along with an ambitious and just transition away from oil and gas production towards zero carbon well before mid-century.

Signatories to the letter are from all around the world and have received Nobel prizes in chemistry, economics, literature, medicine, peace, and physics dating back to 1973. They include Canadian author Alice Munro, awarded a literature prize in 2013, and Canadian biologist Jack W. Szostak, awarded a medicine prize in 2009.

The tar sands project, first proposed in 2011, has pitted environmentalists in Canada and across the globe against conservatives in Alberta, where the mine could create thousands of jobs while producing about 260,000 barrels of oil daily and four million tons of climate-heating emissions annually. Trudeau’s cabinet is expected to weigh in sometime this month.

The world is watching @JustinTrudeau and @CAFreeland! Over 40 @NobelPrize Laureates are calling on you to #RejectTeck, the largest tar sands mine proposal EVER. #cdnpoli https://t.co/JT03b5JkE4

“Teck still hasn’t committed to building Frontier if it’s approved,” Bloomberg reported last week. “The Vancouver-based company’s current focus is on advancing the project through the regulatory process, and further decisions will depend on the outcome of that process, market conditions, and other considerations, said Chris Stannell, a Teck spokesman.”

Although Trudeau often presents himself as committed to addressing the climate crisis, the Liberal prime minister and his government have been criticized for decisions that conflict with scientists’ warnings that the world must rapidly move to 100 percent renewable energy to avert climate catastrophe. One such decision was the Trudeau government buying the Trans Mountain pipeline and long-delayed expansion project in 2018, which Indigenous people and climate activists continue to challenge in court.

Among those opposed to the Frontier mine are leaders and members of Extinction Rebellion, Indigenous Climate Action, the Tiny House Warriors and the Union of British Columbia Indian Chiefs, who have held protests aimed at pressuring the Canadian government to block the contested project.

Over 40 Nobel Laureates call on @JustinTrudeau and @cafreeland to reject the largest tar sands mine proposal EVER.
If built, it would further undermine 🇨🇦 Canada’s commitments to both climate action and indigenous rights.#RejectTeck #CdnPolihttps://t.co/BFq7HHQHyK

“Ultimately, this mine will be so devastating to the climate, and we’re in a climate crisis,” Extinction Rebellion member Sarah Flynn told CBC News in January, “so the short-term advantages of the jobs and the income that this mine will offer will be far outweighed by the climate devastation that the whole world will experience.”

Grand Chief Stewart Phillip of the Union of BC Indian Chiefs told the Toronto Star last month that Trudeau should “walk the walk” of transitioning to a green economy. Phillip noted that “there were commitments made during the last election that the Trudeau government would make decisive moves toward renewable energy and this is an opportunity to follow through on those promises.”

In an op-ed for the Guardian earlier this month, author and activist Bill McKibben wrote that “it’s disturbing in a different way to watch leaders pretend to care — a kind of gaslighting that can reduce you to numb nihilism. Trudeau, for all his charms, doesn’t get to have it both ways: if you can’t bring yourself to stop a brand-new tar sands mine then you’re not a climate leader.”