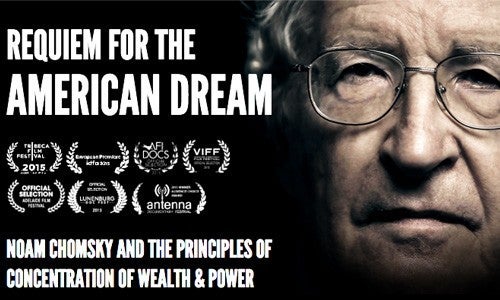 In the new documentary Requiem for the American Dream, produced and directed by Peter Hutchison, Kelly Nyks and Jared P. Scott, Noam Chomsky argues that the collapse of American democratic ideals and the rise of the 1 percent means that the American dream is harder than ever to achieve. And unlike during the Great Depression, there seems to be no end in sight to this class struggle. 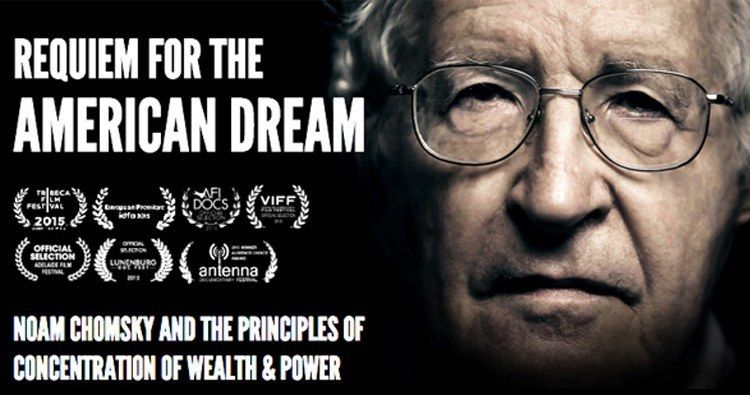 Chomsky was raised in an American middle-class immigrant family in the 1930s. Filmmakers use interviews with Chomsky and archival video from the 1950s onward to illustrate the golden age of American history, as Chomsky calls it. The average worker was able to buy a home, a car and live a life of relative comfort. Upward class mobility was not only aspirational, but achievable.

The widening wage gap, he claims, is “a result of over 30 years of a shift in social and economic policy, completely against the will of the population.” Today, young families are slightly wealthier than their parents were three decades ago, according to a recent BMO Economics Report. However, millennials need to pay more to get their foot in the door and are accumulating debt loads about 260 percent higher than their parents did at their age.

“It goes back to the founding of the country. If you read the debates at the Constitutional Convention, James Madison, the main framer, said the major concern of society has to be to protect the minority of the opulent against the majority,” Chomsky says.

The New York Times, which historically tends to ignore Chomsky, ran a prominent review in its Arts section, going so far as to praise the film and calling Requiem a “well-paced and cogent seminar.”

“Citing Aristotle, Adam Smith and James Madison, among others, he melds history, philosophy and ideology into a sobering vision of a society in an accelerating decline. He never raises his voice in this easy-listening jeremiad. ‘There’s nothing surprising about this,’ he repeats gently in describing what he sees as a 40-year trend of government bent to the will of the superrich at the expense of everyone else. ‘That’s what happens when you put power in the hands of a narrow sector.'”

Requiem for the American Dream is now playing in select cities.