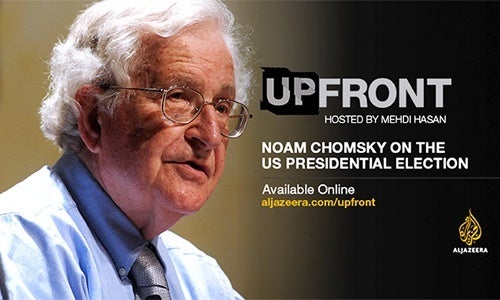 Does Noam Chomsky want to see Democratic candidate Bernie Sanders in the White House come November? Of the current crop of candidates, Chomsky believes Bernie Sanders would have the best policies—even though he may not be the socialist he proclaims he is.

“Bernie Sanders may call himself a socialist, but he’s basically a New Dealer in the current American political system,” Chomsky said.

A New Dealer, he explains, is someone who is way out on the left. “Eisenhower, for example, who said anyone who questions the New Deal doesn’t belong in our political system would be regarded as a raging leftist,” Chomsky said. “So, Bernie Sanders is a decent, honest New Dealer.”

Still, Chomsky fears that with our current system, Sanders doesn’t have much of a chance. While Chomsky prefers Sanders, he emphasizes the importance of putting a Democrat in the White House.

“There are differences in the parties,” he responds, when asked if he’d even consider a Republican over Hillary Clinton. “Small differences [coupled with] great power can have enormous consequences,” he said.

In Chomsky’s opinion, the main difference between the two parties is Islamophobia. All Republican candidates are against the Iran deal and Ted Cruz has actually suggested “carpet-bombing” the Middle East, something no Democrat has proposed in any debate.

“Every time you hit them with a sledgehammer, you expand [the problem]. You have to deal with a situation rationally if you want to be humane but even concerned with your own security,” Chomsky said.

Noam Chomsky has written more than 100 books and has taught for more than half a century. Like Bernie Sanders, he has been speaking on the same ideals for more than five decades.