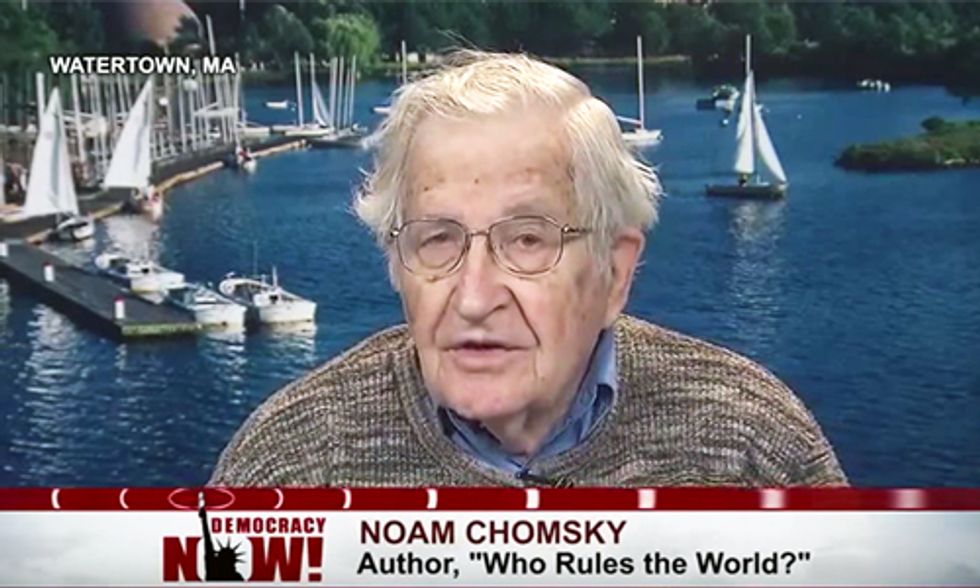 President Obama has just passed a little-noticed milestone, according to The New York Times: Obama has now been at war longer than any president in U.S. history—longer than George W. Bush, Franklin D. Roosevelt and Abraham Lincoln. Obama has taken military action in at least seven countries: Iraq, Afghanistan, Libya, Syria, Pakistan, Yemen and Somalia.

Just last month, President Obama announced the deployment of 250 more Special Operations troops to Syria in a move that nearly doubles the official U.S. presence in the country. As war spreads across the globe, a record 60 million people were driven from their homes last year. Experts warn the refugee crisis may also worsen due to the impacts of global warming. Over the weekend, the National Aeronautics and Space Administration (NASA) released data showing 2016 is on pace to be by far the hottest year ever, breaking the 2015 record. Meanwhile, many fear a new nuclear arms race has quietly begun, as the U.S., Russia and China race to build arsenals of smaller nuclear weapons.

These multiple crises come as voters in the U.S. prepare to elect a new president. We speak with one of the world’s preeminent intellectuals, Noam Chomsky, institute professor emeritus at Massachusetts Institute of Technology, where he has taught for more than 50 years. His latest book is titled Who Rules the World?

Amy Goodman: We’re on the road here in New York, then on today to [Chicago], to Madison, Wisconsin and then to Toronto, Canada.

The New York Times is reporting President Obama has just passed a little-noticed milestone: He has now been at war longer than any president in U.S. history—longer than George W. Bush, longer than Franklin Delano Roosevelt, longer than Abraham Lincoln. Obama has taken military action in at least seven countries: Iraq, Afghanistan, Libya, Syria, Pakistan, Yemen and Somalia. Just last month, President Obama announced the deployment of 250 more Special Operations troops to Syria in a move that nearly doubles the official U.S. presence in the country.

As war spreads across the globe, a record 60 million people were driven from their homes last year. Experts warn the refugee crisis may also worsen due to the impacts of global warming. Over the weekend, NASA released data showing 2016 is on pace to be by far the hottest year ever, breaking the 2015 record. April became the seventh month in a row to have broken global temperature records. Meanwhile, many fear a new nuclear arms race has quietly begun, as the United States, Russia and China race to build arsenals of smaller nuclear weapons. These multiple crises come as voters in the United States prepare to elect a new president.

To make sense of the challenges facing the globe and the state of the U.S. election, we’re joined today by one of the world’s preeminent intellectuals, Noam Chomsky, institute professor emeritus at Massachusetts Institute of Technology, where he’s taught for more than half a century. His latest book is called Who Rules the World?

Noam Chomsky, welcome back to Democracy Now! It’s great to have you with us.

Noam Chomsky: Glad to be with you again.

Amy Goodman: So, Noam, who rules the world?

Noam Chomsky: That’s, to a certain extent, up to us. It is possible for populations to rule the world, but they have to struggle to achieve that. And if they don’t, the world will be ruled by concentrations of power—economic power, state power—closely linked with consequences that are of the kind that you describe. But that’s a choice.

Amy Goodman: How does the United States set the terms of the global discourse and, overall, what’s happening in the world?

Noam Chomsky: Well, that’s basically an outcome of the Second World War. At the end of the Second World War, the United States had a level of power and comparative wealth that had never existed in history. It had literally half the world’s wealth. It had an incomparable position of security—controlled the hemisphere, controlled both oceans, controlled the opposite sides of both oceans. In military terms, it was overwhelmingly preeminent. Other industrial societies had been devastated or severely weakened. The war had actually greatly benefited the U.S. economy. It ended the Depression. Industrial production virtually quadrupled. There was a debt, which you could easily grow out of it by growth. So the United States was in fact in a position to pretty much set the terms for virtually the entire global system.

It couldn’t stay that way, of course, and it began to erode pretty quickly, though, with all the changes over the past years, the United States still is in a preeminent position with incomparable advantages and maybe now a quarter of the world’s wealth. In military terms, on that dimension, the United States is completely alone. It’s the only country that has hundreds, maybe a thousand, military bases around the world, troops all over the world. U.S. military spending is almost as great as the rest of the world combined, technologically much more advanced. And within that context of the past 70 years or so, the United States has had a—usually, a pretty dominant role in world affairs and setting the framework within which others operate—not without conflict, of course.

Amy Goodman: You talk about the two major threats facing the world today: nuclear war and climate change. Talk about each.

Noam Chomsky: Well, I might start by referring to the Doomsday Clock of the Bulletin of Atomic Scientists, a clock that’s—since 1947, shortly after the atomic bombing, they established a Doomsday Clock. Every year, a panel of specialists make an estimate of how close we are to midnight. Midnight means termination for the species. It’s moved up and back over the years. Right now, it—just last year, it was moved two minutes closer to midnight because of the two threats that you mentioned, stayed there this year. That’s three minutes to midnight, close as it’s been since the early 1980s, when there was a major war scare. It was recognized then to be serious. Now that Russian archives have been opened, we see that it was far more serious than was assumed. We were at one point literally minutes away, several points in fact, minutes away from nuclear war. That’s where the Doomsday Clock stands now.

The nuclear threat is the threat of—on the Russian border, which happens to be the invasion route through which Russia was virtually destroyed twice last century by Germany alone—well, Germany as part of a hostile military alliance—on that border, both sides are acting as if a war is thinkable. The U.S. has just sharply increased; it quadrupled military expenses on its side. The Russians are doing something similar. There are constant near collisions, jets coming close to colliding with one another. A Russian jet a couple months ago virtually hit a Danish commercial airliner. U.S. troops are carrying out maneuvers virtually on the Russian border. That threat is escalating and very serious. William Perry, a respected nuclear specialist, a former defense secretary, recently estimated that the threat is higher than it was during the 1980s. There are also confrontations near the Chinese around China, South China Sea and so on. That’s one major threat.

The other is what you just described. The threat of global warming is very serious. Every time one reads a science journal, there’s an even more alarming discovery. Virtually all the ice masses are melting. The Arctic ice mass, which was assumed to be pretty stable, is actually melting very fast, much more than was thought. The glaciers are melting. There’s severe droughts. Right now already, about 300 million people in India are on the edge of starvation from drought, which has been going on for years. The groundwater is depleted as the Himalayan glaciers melt, as they’re doing. It will undermine the water supply for huge areas in South Asia. If people think there’s a migration crisis now, they haven’t seen anything. The sea level is rising. Chances are it could rise three to six feet, maybe more, by the end of the century—some estimate even sooner. It will have a devastating effect, not just on coastal cities, but on coastal plains, like, say, Bangladesh, where hundreds of millions of people will be severely threatened. I mean, this is a—we’re already killing other species at the level of the so-called fifth extinction. Sixty-five million years ago, when an asteroid hit the Earth, devastating consequences ended the age of the dinosaurs, opened the way for small mammals to develop, ultimately evolve, finally evolve intoHomo sapiens, which now is acting the same way the asteroid did. That’s the fifth extinction. It’s going to get worse. All of these are—the rate of global warming today is far faster, maybe a hundred or more times as fast as any moderately comparable period that can be estimated in the geological record.

And to make it worse, of these two huge threats, we have an electoral—the quadrennial electoral extravaganza is going on right now, of course. And it’s pretty remarkable to see how the worst threats that the human species has ever faced, the most important decisions it must make—and soon—are virtually absent from the discussions and debates. On the Democratic side, there’s a couple of comments about it here and there, not much. On the Republican side, it’s much worse. Every single candidate either denies global warming altogether or, in one case, Kasich, admits that it’s taking place but says we shouldn’t do anything about it, which is even worse.

Amy Goodman: Noam, we’re going to go to a break. When we come back, we’ll play the last remaining Republican in the race, Donald Trump’s comment on climate change and also get your take overall on the 2016 presidential election here in the United States. Noam Chomsky, world-renowned political dissident, linguist, author, has a new book out; it’s called Who Rules the World? Stay with us.