NOAA: World’s Largest Sponge Is as Big as a Minivan 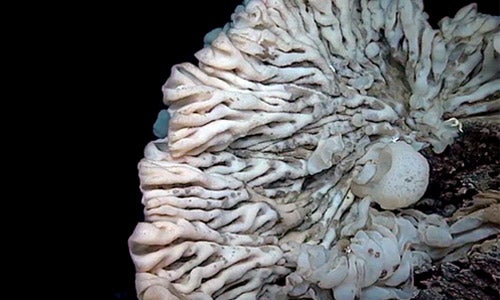 Scientists discovered the world’s largest sponge 2,100 meters (7,000 feet) below the surface of the Pacific Ocean near Hawaii during the National Oceanic and Atmospheric Administration’s (NOAA) 2015 Hohonu Moana: Exploring Deep Waters off Hawai’i.

Scientists measured this massive sponge at 3.6 by 2.1 meters (12 by 7 feet). A Marine Biodiversity study, The Largest Sponge in the World?, was published Wednesday detailing the findings.

“Finding such an enormous and presumably old sponge emphasizes how much can be learned from studying deep and pristine environments such as those found in the remote Papahānaumokuākea Marine National Monument,” Daniel Wagner, lead expedition researcher, said in a statement.

While sponges may not look like much, they are very important. Scientists at the Massachusetts Institute of Technology believe sea sponges were the first animals on Earth. The age of this specific sponge is unknown, but some species found in shallow waters can live more than 2,300 years, according to NOAA.

Sea sponges are also important to their underwater habitats. They filter the water around them, collecting useful bacteria. These bacteria can create forms of nitrogen from the nitrogen gas in the water to create food for the sponge, according to the Tree of Life project. They might also be able to lower excess nitrogen levels in coral reefs, which helps prevent harmful ecosystem changes. But there is still much scientists can learn from these creatures.

This New Scientist video captures the reactions of scientists while viewing the sponge: