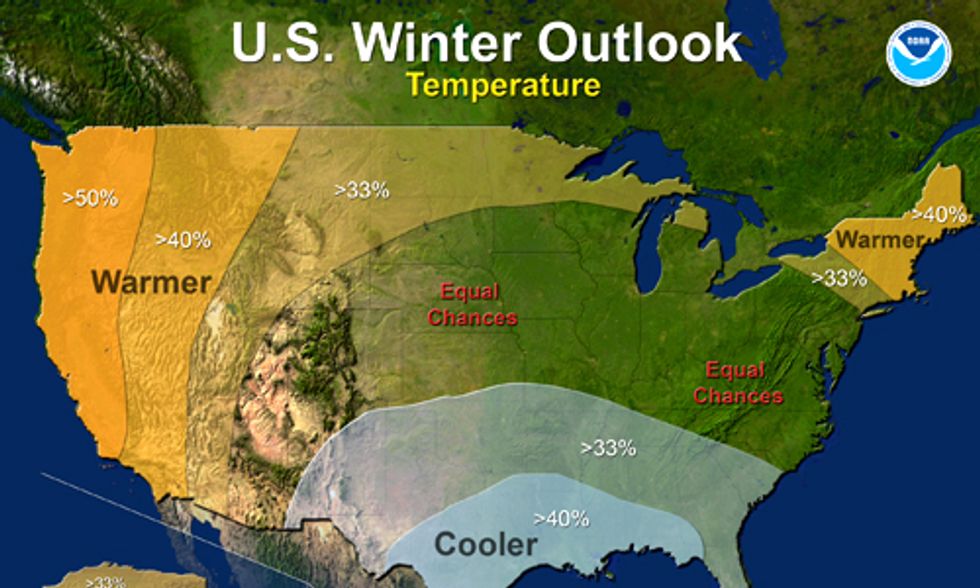 It looks like California and other regions of the Southwest that have been enduring drought for the past four years won't be getting any relief soon.

The winter weather forecast, released today by the National Oceanic and Atmospheric Administration (NOAA), predicted warmer winter weather and little rain for the western part of the country, as well as Alaska, Hawaii and New England. The south, on the other hand, may be a little cooler, undoubtedly fueling a spate of op-ed pieces from climate denier columnists and politicians still insisting"global warming" is the only indicator of climate change. But the forecast says a repeat of last year's frigid winter is unlikely in most parts of the country that endured it.

"While drought may improve in some portions of the U.S. this winter, California's record-setting drought will likely persist or intensify in large parts of the state," said NOAA's forecast. "Nearly 60 percent of California is suffering from exceptional drought—the worst category—with 2013 being the driest year on record. Also, 2012 and 2013 rank in the top 10 of California’s warmest years on record, and 2014 is shaping up to be California’s warmest year on record. Winter is the wet season in California, so mountainous snowfall will prove crucial for drought recovery. Drought is expected to improve in California’s southern and northwestern regions, but improvement is not expected until December or January."

The forecast predicted drought would persist or possibly even get worse in some parts of California, Nevada, Utah, Idaho, Oregon and Washington state, while  "new drought development" is likely in northeastern Oregon, eastern Washington state and small areas of Idaho and western Montana.

“Complete drought recovery in California this winter is highly unlikely," said Mike Halpert, acting director of NOAA’s Climate Prediction Center. "While we’re predicting at least a two-in-three chance that winter precipitation will be near or above normal throughout the state, with such widespread, extreme deficits, recovery will be slow.”

Last month, a study by researchers at California's Stanford University published in the Bulletin of the American Meteorological Society, used a combination of statistical analysis and computer simulations to show that greenhouse gases contributed to the extremely high pressure area or "blocking ridge" over California that diverted storms away from the state, leading to the record low rainfall and historic drought. An article on the Stanford website called it "one of the most comprehensive studies to investigate the link between climate change and California's ongoing drought."

The study's lead author Daniel Swain, who coined the term "Ridiculously Resilient Ridge" to describe the high-pressure zone, said on his California Weather Blog, "Human-caused climate change has increased the likelihood of extremely high atmospheric pressure over the North Pacific Ocean, which suggests an increased risk of atmospheric patterns conducive to drought in California."

Gov. Jerry Brown Discusses Role of Climate Change in California's 10 Wildfires in the Past Week