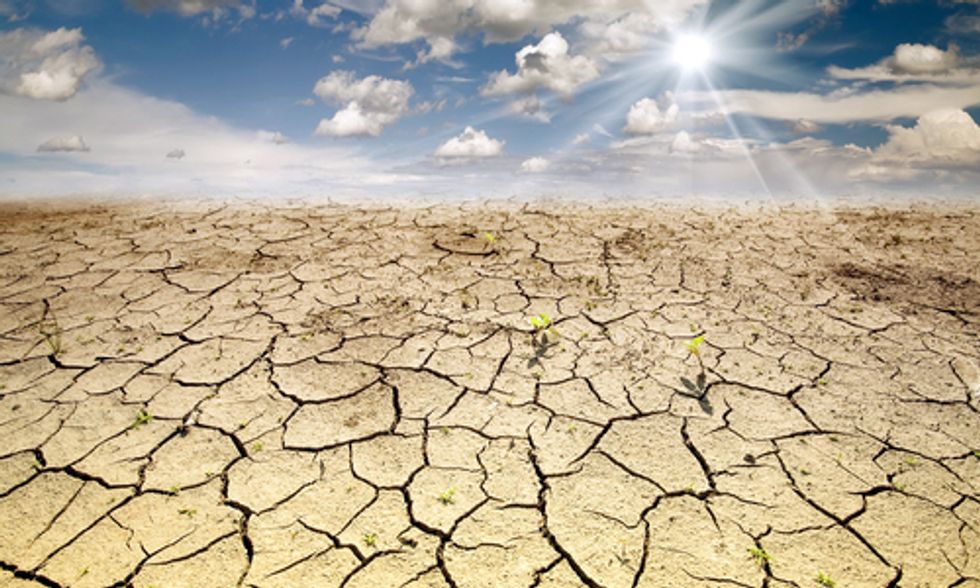 Just a couple months ago, I critiqued a pair of studies that disputed any linkage between human-caused climate change and the exceptional 2014 California drought. Now comes yet another study ("Causes and Predictability of the 2011-14 California Drought") with the imprimatur of the National Oceanic and Atmospheric Administration (NOAA), announced with great fanfare (a NOAA press conference), drawing yet again the same conclusion. My criticisms of the latest study are yet again basically the same, but for reasons I explain below, that conclusion is even more implausible now than it was just two months ago.

I fear that the dubious claims by this latest report simply complicate prospects for having the very important and necessary conversation about what measures California will need to take to deal with what is likely to be a steadily worsening water crisis. Photo credit: Shutterstock

Let me start by noting that this latest report (unless I've missed something?) doesn't appear to be an actual peer-reviewed scientific article, but rather, an internal NOAA report. That causes me some concern, as the claims have not yet been submitted to the independent scrutiny of the larger scientific community in the manner it would have if it were published in a peer-reviewed scientific journal.

That having been said, my main concerns are far more fundamental. The methodology used in the current article, in my view, is deeply flawed because it doesn't properly account for a number of potentially important factors behind the record California drought.

First of all, there is the role of Pacific sea surface temperature (SST). Despite what the authors claim, the Pacific SST patterns underlying the ongoing drought-favorable conditions may be partly forced, and not simply a result of natural climate variability. The IPCC "CMIP5" climate models which the authors quote in their defense may not be getting these patterns right because of flaws that persist even in many state-of-the-art climate models involving the physics underlying El Nino and decadal tropical Pacific climate variability. One recent study suggests that climate change does in fact favor an SST pattern in the North Pacific that increases the incidence of the atmospheric circulation pattern responsible for the current rainfall deficit.

Secondly, the approach taken in this latest study doesn't account for  the potential influence of decreasing Arctic Sea Ice. Studies going back more than a decade show that reduced Arctic sea ice may also favor the atmospheric circulation pattern underlying the current pattern of California drought. More recent work by Jennifer Francis of Rutgers provides independent support for that mechanism.

Most inexplicable of all, though, is the fact that the authors pay only the slightest lip service to the role of surface temperature in drought, focusing almost entirely on precipitation alone. That neglects the fact that California experienced record heat over the past year, and this anomalous heat certainly contributed to the unprecedented nature of the current drought. Another article published just a week ago in one of the premier peer-reviewed journals in the field, Geophysical Research Letters (GRL), preemptively critiqued the present study, by stressing the importance of looking at the role of extremely high surface temperatures as well as precipitation in assessing the factors behind e.g. the 2014 California drought.

And most ironic of all, just days ago, another article in GRL concluded that the record heat played a role in making the current California drought the worst such drought in at least 1200 years! (see also this discussion by Peter Gleick).

The authors of the new report would really have us believe that is merely a coincidence and has nothing to do with the impact of human-caused climate change? Frankly, I don't find that even remotely plausible.

I'm sure this latest study was done in good faith, and I don't question the intentions of the authors. But I'm troubled by the fact that the findings were announced with such fanfare (how many studies, let alone non peer-reviewed ones, get the benefit of a NOAA press conference?), when the conclusions are so flimsy, are contradicted by so much other peer-reviewed scientific work and involve a matter of tremendous societal importance. I fear that the dubious claims by this latest report simply complicate prospects for having the very important and necessary conversation about what measures California will need to take to deal with what is likely to be a steadily worsening water crisis. That is no small matter.