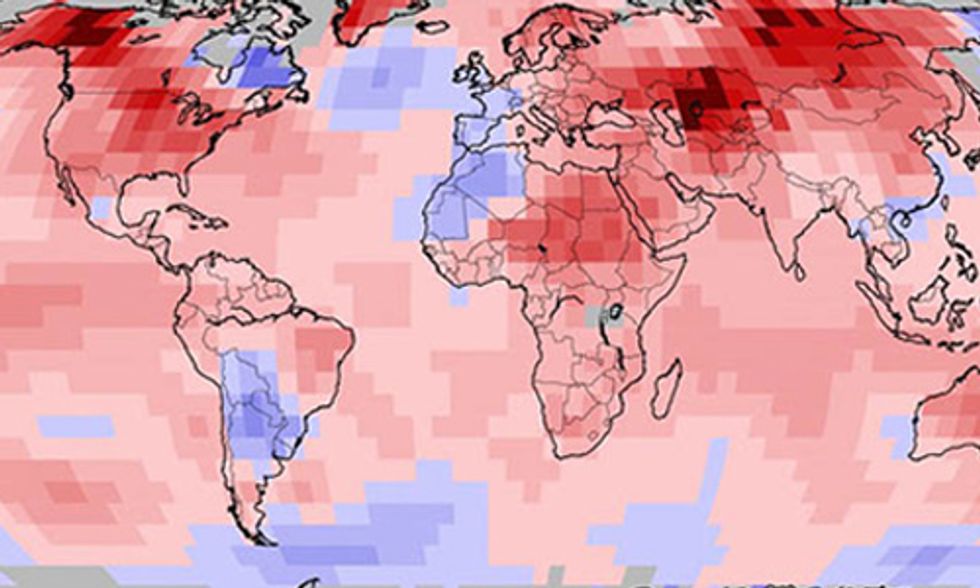 By Jeff Masters and Bob Henson

March 2016 was by far the planet's warmest March since record keeping began in 1880 and was also the warmest month relative to average of any month in the historical record, said the NOAA's National Centers for Environmental Information on Tuesday.

Figure 1. Departure of temperature from average for March 2016, the warmest March for the globe since record keeping began in 1880. Record warmth was observed over most land areas on Earth, with especially warm readings over much of Siberia, central Asia, northern Africa, the eastern U.S., western Canada and Alaska. Photo credit: National Centers for Environmental Information

The past six months [as measured by departure from average in both the NOAA and NASA databases] all set records for their respective months as the warmest since 1880. The impressive global warmth in recent months is due to the steady build-up of heat-trapping greenhouse gases due to human activities, plus a spike due to a large amount of heat being released from waters in the Eastern Pacific due to the powerful 2015-16 El Niño event. This event peaked in December, but the warmest atmospheric readings (relative to average) usually lag the peak oceanic temperatures by a few months.

Figure 2. Departure from average for the global January-through-March temperature for the years 1880 - 2016. This year has seen by far the warmest temperatures on record for each of the three months. Photo credit: NOAA / National Centers for Environmental Information

March 2016 also marked the eleventh consecutive month that the monthly temperature record was been broken and the sixteenth consecutive month (since December 2014) that the monthly global temperature ranked among the three warmest for its respective month in the NOAA database. Both global ocean and global land temperatures were the warmest on record for any March. Global satellite-measured temperatures in March 2016 for the lowest 8 km of the atmosphere were the warmest for any March in the 38-year record and the third-largest warm departure from average any month, according to the University of Alabama Huntsville. This is the sixth consecutive month the University of Alabama Huntsville database has registered a record monthly high.

Strong El Niño conditions were observed during March in the equatorial Eastern Pacific, but El Niño is weakening quickly. The event peaked in strength in late November 2015, when the weekly sea surface temperatures (SSTs) in the so-called Niño 3.4 region (5 S - 5 N, 120 W - 170 W) peaked at a record 3.1 C above normal. By the week of April 6, the Niño 3.4 SST anomaly had fallen to 1.3 C above average—just below the 1.5 C threshold between "strong" and "moderate"—and it remained at that level on April 13. Temperatures averaged through the upper 300 meters (1,000 feet) of the tropical Pacific have already fallen below the seasonal norm and NOAA expects a transition to neutral conditions during late Northern Hemisphere spring or early summer 2016, with a 65 percent chance of a transition to La Niña conditions by the August-September-October peak of the Atlantic hurricane season.

Arctic sea ice extent during March 2016 was the second lowest in the 38-year satellite record, just above the record low set in March 2015, according to the National Snow and Ice Data Center. Arctic sea ice reached its annual maximum extent on March 24 and set a new record for the lowest maximum extent in the satellite record. The previous record was set just last year. However, there is little correlation between the maximum winter extent and the minimum summer extent observed in September. The key to getting a low summer ice extent is to get an earlier-than-average start to surface melting. This allows the snow to darken and expose the ice below earlier, which in turn increases the amount of solar heat absorbed, allowing more ice to melt.

And here are the three disasters from late February through the end of March 2016:

From January through March 2016, four nations or territories tied or set all-time records for their hottest temperature in recorded history and one (Hong Kong) has set an all-time cold temperature record. "All-time" record here refers to the warmest or coldest temperature ever reliably reported in a nation or territory. The period of record varies from country to country and station to station, but it is typically a few decades to a century or more. Most nations do not maintain official databases of extreme temperature records, so the national temperature records reported here are in many cases not official. Our data source is international weather records researcher Maximiliano Herrera, one of the world's top climatologists, who maintains a comprehensive list of extreme temperature records for every nation in the world on his website. If you reproduce this list of extremes, please cite Maximiliano Herrera as the primary source of the weather records. Here are 2016's all-time heat and cold records so far:

Botswana set its all-time hottest record on Jan. 7, when the mercury hit 43.8 C (110.8 F) at Maun. The old record was set just the previous day (January 6) with 43.5 C (110.3 F) at Tsabong. The record heat in Botswana during the first week of January was part of a remarkable heat wave that affected much of southern Africa, causing at least $250 million in drought-related damages to South Africa in the month. Mr. Herrera noted in an email to me that temperatures in South Africa at elevations between 1,000 and 1,600 meters were higher than any previous temperatures ever recorded at those altitudes anywhere in the world. The national heat records of Lesotho, Mozambique, Namibia and Swaziland might all have fallen were it not for the lack of observing stations in the hottest areas. Lesotho has no weather stations anymore that issue the standard "synoptic" weather observations every six hours; Mozambique and Swaziland have closed all their stations in the hottest areas; and Namibia just closed its Noordower station, which was its hottest station.

Vanuatu in the South Pacific set its all-time national heat record on February 8, when the mercury hit 36.2 C (97.2 F) at Lamap Malekula. The previous record was a 35.7 C (96.3 F) reading just the previous day (February 7) at the Bauerfield Efate Airport. All seven major weather reporting stations in Vanuatu beat or tied their all-time heat records February 7 - 8.

April is Off to a Sizzling Start

Widespread, intense heat has afflicted a huge swath of the tropics during the first half of April, from Central Africa to the Philippines. The heat wave across Southeast Asia has been particularly extreme—the worst there since at least 1960—with all-time records set at a number of locations. Weather Underground weather historian Chris Burt takes a closer look at the extraordinary heat of April, including two new all-time national records, in his Tuesday blog post.