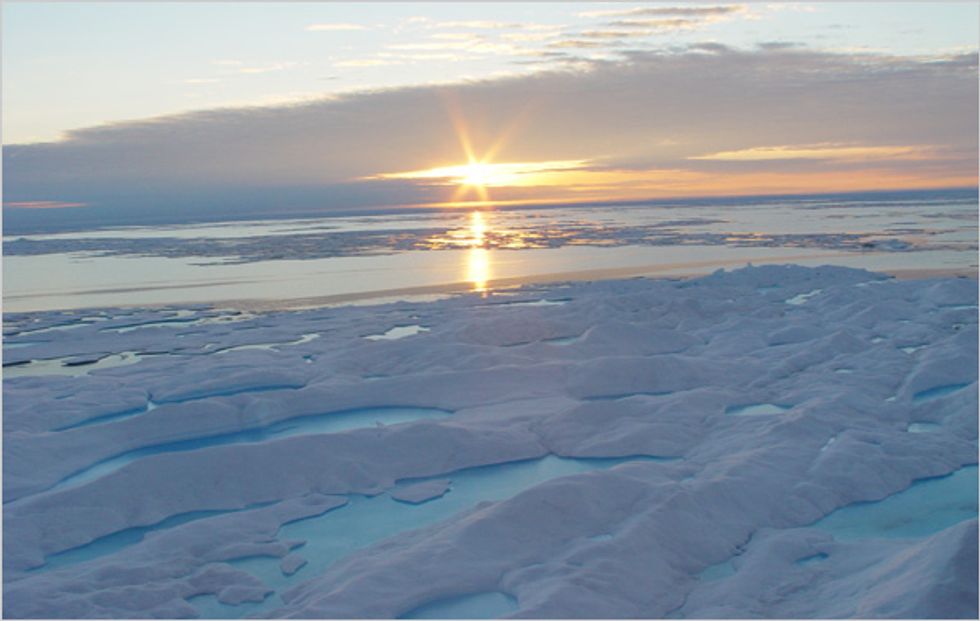 A coalition of Alaska Native and conservation groups went to court Sept. 29 to challenge the Obama administration’s decision to allow offshore oil drilling by Shell Oil in the Beaufort Sea in America’s Arctic Ocean.

After the devastating Deepwater Horizon spill, the Obama administration wisely delayed plans by Shell Oil to drill in the Arctic Ocean. But this August, the administration reversed course and approved the first part of the most aggressive Arctic drilling proposal in the history of the country by approving Shell’s plans to start drilling in the Beaufort Sea as early as the summer of 2012.

“Allowing Shell to drill when it has no credible plan to cleanup an oil spill in the Arctic’s icy waters, and instead simply assumes it can clean up 95 percent of oil spilled isn’t just unrealistic, it’s insulting and irresponsible,” said Earthjustice attorney Holly Harris.

A spill in the Arctic Ocean would devastate polar bears, bowhead whales and other marine mammals and would severely affect Native subsistence communities which have thrived in this region for generations.

“Approving Shell drilling in the Beaufort Sea is irresponsible and risks disaster. We have a right to life, to physical integrity, to security and the right to enjoy the benefits of our culture. For this, we will fight, and this is why we have gone to court today. Our culture can never be bought or repaired with money. It is priceless,” said Caroline Cannon, president of the Native Village of Point Hope.

The most recent oil spill drill in the Beaufort Sea (which took place more than 10 years ago) described mechanical cleanup in icy conditions as a failure. Nothing has changed since that drill. A recent report to the Canadian government concluded cleanup would be impossible 44 to 84 percent of the time during the short summer drilling season and completely impossible the other seven to eight months of the year.

U.S. Coast Guard (USGS) officials have repeatedly explained that the resources to clean up an oil spill in the waters of the Arctic Ocean simply don’t exist. This summer, Commandant Admiral Robert Papp told Congress that the federal government has “zero” spill response capability in the Arctic.

“Any oil company that wants to drill in the Arctic Ocean must demonstrate an ability to clean up oil spilled in these icy waters with proven technology,” said Cindy Shogan, executive director, Alaska Wilderness League. “Shell’s current oil spill plan is full of inadequacies and falsehoods. Shame on the Obama administration for allowing politics to trump science by approving such an unrealistic plan to drill in the Beaufort Sea.”

“Given the risk of a catastrophic oil spill, the Obama administration should not allow Shell to play Russian roulette with the future of polar bears, Pacific walrus and the entire Arctic ecosystem,” said Rebecca Noblin, director for the Center for Biological Diversity in Alaska. “If polar bears, walrus and other imperiled species are going to survive in a rapidly-melting Arctic, we need to protect their critical habitat, not sacrifice it to oil companies.”

“Both Shell and the federal government are proceeding as if the Deepwater Horizon oil disaster—the worst environmental catastrophe this country has ever seen—simply didn’t happen,” said Sierra Weaver, attorney for Defenders of Wildlife. “Pretending there’s no risk associated with drilling, especially in the fragile waters of the Arctic, is not only irresponsible, it’s unacceptable.”

“If you liked the Deepwater Horizon oil spill, you will love Shell’s plan for Alaska,” said Mike Daulton, vice president of Government Relations, National Audubon Society. “Shell has never demonstrated the ability to effectively clean up a large oil spill in the Arctic Ocean. In addition to the usual problems handling a major spill, Alaska has huge ocean waves, gale force winds and widespread sea ice. A major oil spill in Alaska would be Deepwater Horizon meets the Titanic.”

“Water and oil may not mix but ice and oil is even worse,” said Chuck Clusen, NRDC’s director of national parks and Alaska projects. “Any drilling in Camden Bay—right off the shore of the Arctic National Wildlife Refuge—is unacceptable. A proper process or technology does not exist that could appropriately protect or clean up this sea. A spill could spoil the barrier islands of the Refuge threatening many species of wildlife, poison the migratory route of the endangered bowhead whale and kill other marine mammals such as polar bears, walrus and ice seals and substantially damage the very sensitive ecology of the Beaufort Sea for what could be many years.”

“It is unfortunate that we have been forced to go to court to make our voices for science and preparedness heard,” said Dr. Chris Krenz, Arctic project manager for Oceana, “We remain hopeful that the government will stop making piecemeal decisions that lead to controversy and litigation and instead commit to a holistic look at the Arctic Ocean and a vision that will move us forward.”

“Arctic indigenous peoples are on the front line of climate change and Shell’s approved exploration plans to drill in the Beaufort Sea will only amplify the already devastating impacts of climate change,” said Shawna Larson, Alaska program director for Pacific Environment. “The risk of major oil spills and the fact that there is no way to clean up an oil spill in the Arctic further threatens Arctic indigenous peoples traditional foods, future generations, human health and the environment. The approval of this plan calls into question the U.S. government’s legal trust responsibility to Alaska’s Indigenous Peoples.”

“The holes in Shell’s plan, notably the lack of a workable oil spill response plan, leave the fragile natural systems of the Arctic and the livelihoods of native communities at risk. Smarter transportation choices, not dangerous drilling plans, are what we should be pushing forward,” said Dan Ritzman, Sierra Club Alaska program director.

“Approving oil drilling in the remote and icy waters of the Arctic Ocean at this time is reckless,” said Nicole Whittington-Evans, Alaska regional director with The Wilderness Society. “This region is home to endangered and threatened polar bears, bowhead whales, seals, fish and birds. Alaska Natives in the region rely on these resources. Shell has no proven technologies to clean up an oil spill in these waters. Scientists agree, and so do we, that we need a better understanding of the impacts of an oil spill and the ability to respond effectively before we take the risk to drill.”