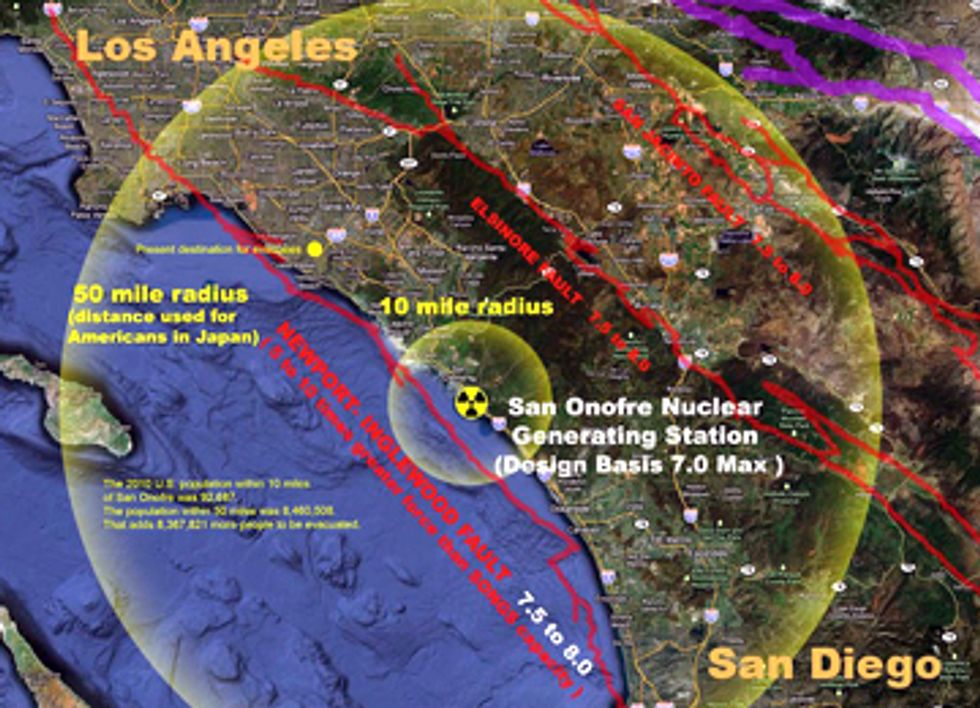 In January, it seemed the restart of San Onofre Unit 2 would be a corporate cake walk.

With its massive money and clout, Southern California Edison was ready to ram through a license exception for a reactor whose botched $770 million steam generator fix had kept it shut for a year.

But a funny thing has happened on the way to the restart: a no nukes groundswell has turned this routine rubber stamping into an epic battle the grassroots just might win.

Indeed, if ever there was a time when individual activism could have a magnified impact, this is it.

This comes as the nuclear industry is in nearly full retreat. Two U.S. reactors are already down this year. Yet another proposed project has just been cancelled in North Carolina. And powerful grassroots campaigns have pushed numerous operating reactors to the brink of extinction throughout the U.S., Europe and Japan, where all but two reactors remain shut since Fukushima.

In California, it's San Onofre that's perched at the brink.

By all accounts Southern California Edison should have the clout to restart it with ease. The Nuclear Regulatory Commission (NRC) has been a notorious rubber stamp for decades. The California Public Utilities Commission (CPUC), which decides how much the utilities can gouge from the ratepayers, has long been in Edison's pocket. State water quality regulations could force Edison to build cooling towers, a very expensive proposition that would likely lead to a quick retirement. But Gov. Brown has been deafeningly silent on the issue.

San Onofre sits in an earthquake/tsunami zone halfway between Los Angeles and San Diego. At least 8 million people live within a 50 mile radius, many millions more within 100 miles. The reactors are a stone's throw from both a major interstate and the high tide line, with a 14-foot flood wall a bare fraction of the height of the tsunami that overwhelmed at Fukushima.

San Onofre Unit 1 was shut in 1992 by steam generator issues. Edison recently spent some three-quarters of a billion dollars upgrading the steam generators for Units 2 and 3. But the pipes have leaked and failed. Units 2 and 3 have been shut since January 2012. Edison has now asked the NRC for permission to run Unit 2 at 70 percent power for five months to see how the reactor might do. An NRC panel has termed the idea "experimental."

Edison is desperate to get the reactor running before summer. But in the wake of Fukushima, and in the midst of a major boom in solar energy, southern California is rising up to stop that from happening.

• A dozen cities, towns and public organizations—including a unanimous Los Angeles city council and the public school district of San Diego—have asked that public hearings and/or further in-depth, transparent investigations be held before the reactors reopen.

• U.S. Sen. Barbara Boxer (D-CA) and Rep. Ed Markey (D-MA) have asked the Nuclear Regulatory Commission to thoroughly investigate all relevant issues—and to make them public—before restart can occur. The Boxer/Markey inquiry has included some heated dialogue with regulatory staff. It's raised critical questions about whether Edison knew it was installing faulty equipment in the first place, a potentially explosive revelation given the dangers and costs involved.

• Newly revealed correspondence between Edison and Mitsubishi over additional steam generator issues reveal persistent unresolved disagreements about the technology involved and what needs to be done about it, casting further doubt on what might constitute safe operating procedures.

• In response to a suit by Friends of the Earth (FOE), the NRC's Atomic Safety and Licensing Board has ruled that Edison's restart application in fact constitutes a license amendment, which should require a full public hearing. The NRC could overrule its licensing board. But this was a unanimous decision and the public and congressional outcry would be substantial. It's a huge setback for Edison, damaging what's left of its credibility and likely pushing the restart far into the future. There's also much Edison is likely to want hidden from the public record.

• NRC Chair Allison Macfarlane now says San Onofre cannot be licensed to restart at least until late June, which probably pushes any actual restart date until after the summer.

• So this could become the region's second straight peak season with no power from San Onofre. Despite utility rhetoric, its absence last summer caused no blackouts or significant shortages, and none are expected this summer either. Edison's argument that the reactors are needed to keep the region cool and lit will thus disappear.

• Edison CEO Theodore Craver now says San Onofre could be permanently shut before the end of the year. "Edison is hemorrhaging cash at San Onofre," says FOE's Damon Moglen. Craver is "a financial guy" who is now just "looking for the right numbers to get to shut-down."

It's common in the nuke blackmail business for a utility to threaten to shut a reactor where jobs and power are desperately needed. But Edison now has a more desperate theme. The spread of solar throughout southern California will bring far more jobs than San Onofre can begin to promise. A new feed-in tariff in Los Angeles has helped spread solar panels throughout the region.

Edison billed southern California ratepayers roughly $1 billion for San Onofre in 2012 even though it generated no juice. The CPUC would probably let them do it again, but public awareness and anger levels have soared. Major media throughout the region have been pummeling Edison, largely over economic issues.

Should San Onofre stay dead, its power void will fast be filled by cheaper, cleaner, safer green technologies destined to make southern California a major focal point in the global march to Solartopia.

This shutdown would take the number of licensed U.S. reactors down to 100. With others on the brink at Indian Point, Vermont Yankee, Oyster Creek and elsewhere, the race to shut the world's nukes before the next Fukushima is turning the so-called nuclear renaissance into an all-out reactor retreat.