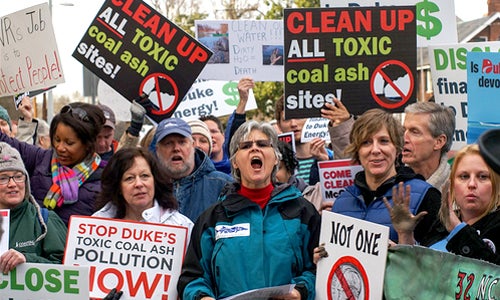 For four years, Waterkeeper Alliance and our North Carolina Riverkeepers have been locked in a pitched battle with Duke Energy to force the irresponsible company to clean up its dangerous, illegally polluting ash ponds which we call toxic ash holes. In 2009, I traveled to Raleigh to meet with the Aquifer Protection Section of the North Carolina Department of Natural Resources (DENR). My hope was to find an ally who had a plan to address the 14 coal ash ponds sites in NC. Every one of these coal ash ponds were contaminating ground water at levels that exceeded state standards. I was hopeful that DENR would be an ally and work with us. 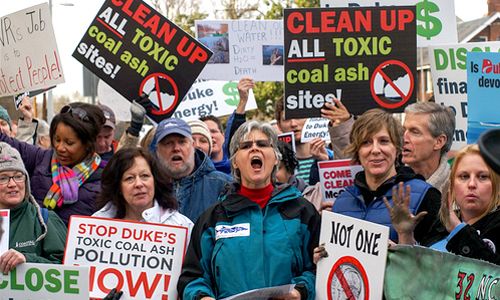 Waterkeeper Alliance was at the Governor’s Mansion in Raleigh, NC on Wednesday March 5, with a whole lot of North Carolina voters and tax payers to demand clean up of Duke Energy’s toxic ash holes. Photo Credit: Pete Harrison, Waterkeeper Alliance

In meetings with Ted Bush, Debra Watts, Betty Wilcox and others at DENR about their plans to require clean up of toxic ash holes; I asked them about specific provisions in North Carolina groundwater law which required Duke and Progress Energy to:

After I left the meeting I knew that on all four counts, DENR had failed to require the utilities to do what was mandated by North Carolina law. There were no plans for immediate action to eliminate the source of contamination even though DENR knew the toxic ash holes had been contaminating ground water for years. There were no reports and no corrective action plans. DENR just blithely ignored the law and had no plans to make either Duke or Progress clean up the problem. My hopes for DENR as an ally for justice, were totally quashed at this point.

So Waterkeeper Alliance and the North Carolina Riverkeepers got busy educating the people of North Carolina that Duke and Progress Energy’s toxic ash holes were contaminating North Carolina water from the mountains to the sea. My first sampling trip to quantify the extent of the contamination was in 2010 with French Broad Riverkeeper Hartwell Carson. Our testing found water, sediment and fish contaminated with coal ash toxins in the French Broad River right below the Asheville coal ash pond discharge. Then our Catawba Riverkeeper, Sam Perkins began sampling illegal leaks from the Riverbend’s toxic ash holes. A short while later, I spent two days with Kemp Burdette, our Cape Fear Riverkeeper sampling Sutton Lake for coal ash contamination.

By October of 2012 we had gathered enough evidence to know for certain that Duke’s toxic ash holes were contaminating both groundwater and surface water across the state. We also knew DENR was not going to do its job of protecting the people and waterways of NC from that contamination. Therefore we asked the Southern Environmental Law Center (SELC) to represent us and begin filing legal challenges under both state and federal law to compel Duke and DENR to clean up the contamination.

DJ Gerken was the first SELC lawyer to answer our call. He and his colleagues in the Asheville SELC office undertook a comprehensive review of the very same groundwater law I reviewed with DENR in 2009. They came to the same conclusion I did. North Carolina law plainly said that immediate action to eliminate the source of contamination was required; so on Oct. 10, 2012, DJ Gerken and the Southern Environmental Law Center filed a petition on behalf of Waterkeeper Alliance, French Broad Riverkeeper, Cape Fear Riverkeeper and the Sierra Club asking the North Carolina Environmental Management Commission to direct DENR to do its job and compel Duke and Progress Energy to clean up their toxic ash holes.

Our first North Carolina coal ash legal action was met with unified opposition by Duke Energy and DENR. They teamed up against us and argued before the EMC and later in front of Judge Ridgeway in 2013 under the McCrory administration that our interpretation of North Carolina law was wrong. Duke’s spokesperson, Erin Culbert repeatedly attempted to denigrate the data we collected and our use of Duke’s own ground water monitoring data as emotion. Specifically she said, “These special interest groups rely on emotion, not facts, to advance their mission to phase out coal. They will not be satisfied with anything less than a complete excavation of ash from our sites.”

When Duke Energy could not deny the fact that their illegally leaking ash holes were contaminating North Carolina ground water and surface water with a whole stew of toxic heavy metals, they used the despicable tactic of shooting the messenger. They accused us of using “emotion, not facts” even though for four years Waterkeepers had been consistently presenting facts to DENR, news reporters and the public.

Yesterday, Duke and DENR’s four year failure to do what is required by North Carolina law and ignoring the unified voice of the all the Waterkeepers in North Carolina finally hit a brick wall. Judge Ridgway looked at facts and the law, not emotion. In a landmark decision, he agreed with the Waterkeepers, Sierra Club and the Southern Environmental Law Center.

He found that both DENR and EMC were wrong to shield Duke Energy from immediate action to clean up their toxic ash holes and that they “erred as a matter of law.” Specifically he said, “It is plainly erroneous and inconsistent with the regulation for the EMC to interpret the 2L Rule to require or permit anything other than ‘immediate action to eliminate the source or sources of contamination.’”

Waterkeeper Alliance calls on Duke Energy and DENR to stop wasting time and do what we have asked you to do over and over again for the last four years—take immediate action to clean up all 37 of North Carolina’s leaking coal ash ponds. Four years of whining, making excuses and doing nothing is enough. It is past time for you take responsibility and clean up all the illegal, water polluting ash holes before we have another catastrophe like the Dan River disaster.

Check out these three galleries giving a photographic overview of the Duke Energy coal ash spill: