Naomi Klein: ‘No Is Not Enough’ 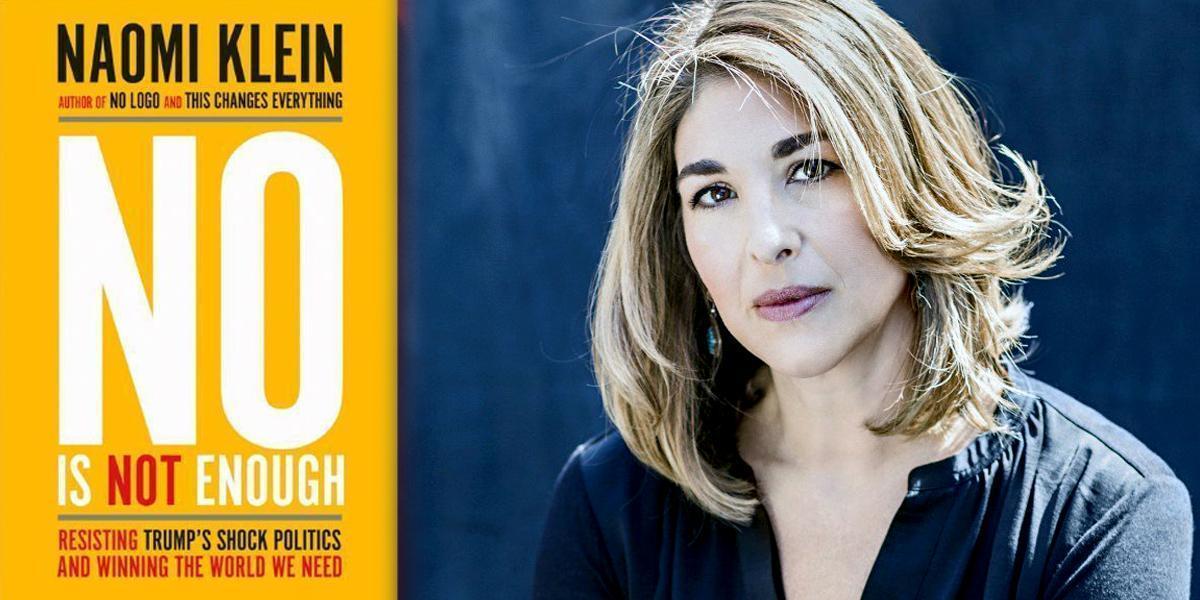 How did a man like Donald J. Trump get to be president? And how on Earth can his dangerous agenda be fought?

For those burning questions, a forthcoming book described as “the toolkit for shock resistance” could well be an indispensable resource.

Authored by award-winning author and investigative journalist Naomi Klein, the book, No Is Not Enough: Resisting Trump’s Shock Politics and Winning the World We Need, will publish in the U.S. on June 13.

“Trump is extreme, but he’s not a Martian,” wrote Klein. “On the contrary, he is the logical conclusion to many of the most dangerous trends of the past half century. He is the personification of the merger of humans and corporations—a one-man megabrand, with wife and children as spin-off brands.”

A website for No Is Not Enough says the book:

Reveals, among other things, how Trump’s election was not a peaceful transition, but a corporate takeover, one using deliberate shock tactics to generate wave after wave of crises and force through radical policies that will destroy people, the environment, the economy and national security. This book is the toolkit for shock resistance, showing all of us how we can break Trump’s spell and win the world we need.

In the wake of Trump’s election, Klein, while accepting the 2016 Sydney Peace Prize, also offered her thoughts on the factors that paved the way for the real estate mogul’s rise to power and the strategies needed for a movement to rise against Trump (as well as other Trump-esque figures).

“If there is a single overarching lesson in the Trump victory, perhaps it is this: Never, ever underestimate the power of hate, of direct appeals to power over the ‘other’ … especially during times of economic hardship,” she said.

Another takeaway, she continued, is that “four decades of corporate, neoliberal policies and privatization, deregulation, free trade and austerity” have ensured ongoing economic pain and in turn, enabled the rise of faux-populists like Trump.

An additional lesson is that “only a bold and genuinely re-distributive agenda has a hope of speaking to that pain and directing it where it belongs—the politician-purchasing elites who benefited so extravagantly from the auctioning off of public wealth, the looting of our land, water and air and the deregulation of our financial system.”

“If we want to defend against the likes of Donald Trump—and every country has their own Trump—we must urgently confront and battle racism and misogyny in our culture, in our movements and in ourselves. This cannot be an afterthought, it cannot be an add-on. It is central to how someone like Trump can rise to power.”

Klein, whose other works include No Logo, This Changes Everything and The Shock Doctrine, also recently joined The Intercept as a senior correspondent. There, she is tasked with monitoring the “shocks of the Trump era.” Days after Trump’s inauguration, she wrote that his administration:

Can be counted on to generate a tsunami of crises and shocks: economic shocks, as market bubbles burst; security shocks, as blowback from foreign belligerence comes home; weather shocks, as our climate is further destabilized; and industrial shocks, as oil pipelines spill and rigs collapse, which they tend to do, especially when enjoying light-touch regulation.

All this is dangerous enough. What’s even worse is the way the Trump administration can be counted on to exploit these shocks politically and economically.

This is the first time one of Klein’s books will be published by the independent, Chicago-based Haymarket Books, which has delivered works by esteemed authors including Noam Chomksy, Howard Zinn, Keeanga-Yamahtta Taylor and Winona LaDuke.

Dave Zirin, sports editor at The Nation, tweeted of the pairing of Klein and Haymarket: “A match made in radical heaven.”