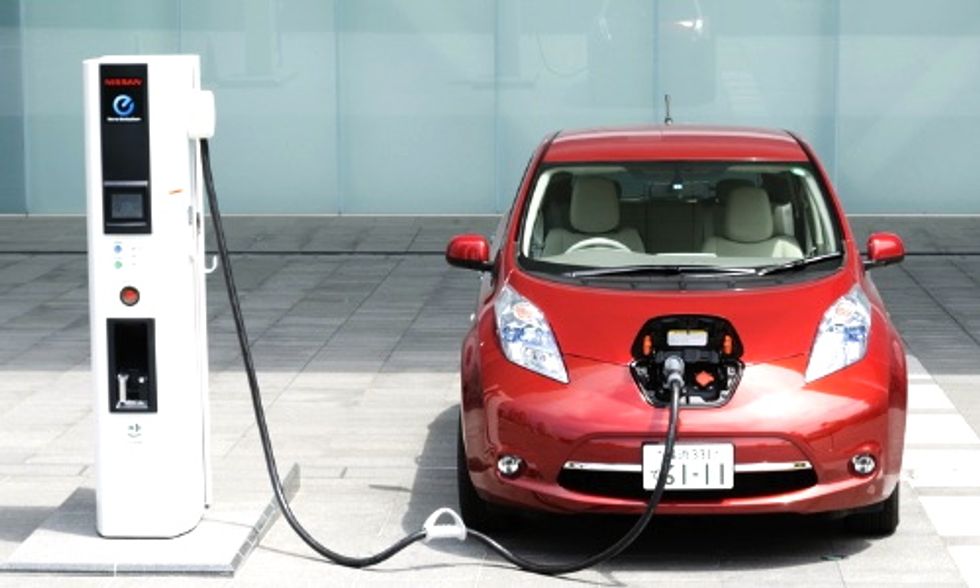 Like rollover minutes or selling surplus solar power back to the utility, Nissan is soon letting electric car drivers sell unused power left in their car batteries back to the grid, or use it to power their home. Nissan, a leading EV maker with their popular LEAF, agreed on this game-changing deal with Spanish utility company Endesa this week at the 85th Geneva International Motor Show.

According to a press release, this move from the two companies will usher a mass-market vehicle-to-grid (V2G) system for the European market. This technology consists of Endesa's two-way charger and an energy management system that can also integrate power from renewable sources, such as solar panels and wind turbines.

The deal allows EV drivers to reduce costs, and theoretically gives them the power to decide how and where to use the electricity they generate, and not just on the road. Nissan said that their LEAF or e-NV200 drivers can charge their vehicles at low-demand, and cheap tariff periods, with an option to then use the electricity stored in the vehicle's battery at home when costs are higher, or even feed back to the grid with a net financial benefit.

"We believe this innovation represents a significant development for Nissan LEAF and e-NV200 customers," said Paul Willcox, chairman of Nissan Europe. "Every Nissan electric vehicle battery contains a power storage capability that will prove useful in contributing towards smarter and responsible management of the power demand & supply of local power grids, thus reducing our EV total cost of ownership. Not only does this represent an opportunity for Nissan's EV private and fleet owners, it could also support grid stability and fully demonstrate that each Nissan EV represents a tangible social asset."

The groundbreaking deal integrates electric vehicles with the renewable energy sector. Nissan said their longer term zero-emission vision is for EVs to be at the center of a fully integrated system whereby owners can participate in wholesale energy markets using the power stored in the batteries of their electric vehicles, and thus significantly reduce their cost of operation.

The auto giant added that in a not-so-distant scenario, the EV user not only decides when and where they want to charge their EV, but how best they spend and re-sell the energy stored in their EV; receiving tangible financial benefits in terms of energy savings, while at the same time maximizing the use of green energy.

"The flexibility offered by V2G implementation in terms of storing and releasing green energy into the grid will further enhance the already significant and tangible benefits of electric mobility," said Javier Uriarte, Head of Market Iberia at Endesa. "This is why Endesa, together with its parent company Enel and partner Nissan, have decided to join efforts in promoting this technology."

The electric car industry is only growing, especially in Europe. Demand is high, with registrations up 300 percent in the UK and 36.6 percent across the continent. Nissan is the world leader in EV sales, with more than 160,000 Nissan LEAFs sold globally.