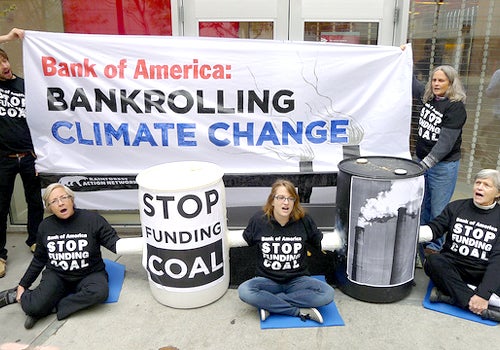 Nine people were arrested today in sit-ins at four different Bank of America locations across Charlotte, North Carolina. The activists were part of Rainforest Action Network’s campaign to confront the bank’s leading role in coal financing, which impacts the quality of air in North Carolina and contributes to global climate change pollution. 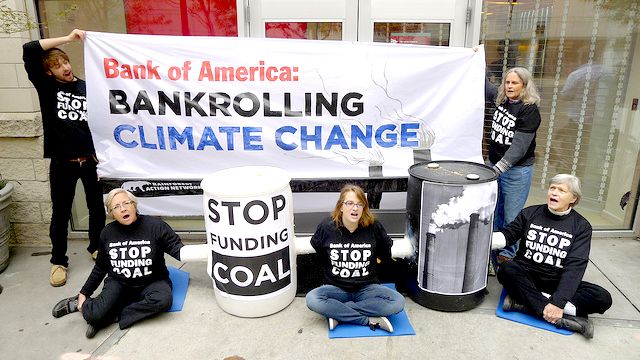 Among those arrested was Patricia Moore, 75, of Charlotte, a Bank of America family shareholder and grandmother concerned about the impact coal pollution is having on her granddaughter who suffers from chronic asthma.

Seated with her arm locked into a 55-gallon barrel, Moore explained her participation in today’s protest: “Most of the members of my family live within the ring of five coal plants that surround our city. When Bank of America funds coal, it sponsors the coal pollution that’s hurting my family. My husband and I are Bank of America shareholders, but we are grandparents first, foremost and forever.”

In the past two years, Bloomberg data indicates that Bank of America has invested $6.4 billion in the U.S. coal industry, surpassing any other American financial institution.

According to a 2010 Clean Air Task Force study, 325 deaths, 502 heart attacks and 5,490 asthma attacks are attributed to the five coal plants within 50 miles of Charlotte. A new Duke Energy coal fired power plant, known as Cliffside, is expected to begin operating before the end of the year.

Coal is also the leading cause of climate change in the country. “I wish Bank of America would stop enabling the coal industry that pollutes Charlotte’s air, but I am even more concerned about global climate pollution,” said Beth Henry, a resident of Charlotte prior to being arrested at today’s protest. “Coal contributes more global warming pollution than any other single source. With droughts and super storms devastating our economy and threatening the future, the bank needs to stop financing coal and fund the solutions.”

U.S. coal stocks have dropped considerably in recent days, due to expectations of regulation under the second term of the Obama administration, the price of natural gas, increasing public pressure about air quality and climate change concerns, and a significant drop in U.S. consumption.

“Plain and simple, coal is a bad investment. It’s bad for our health, it’s disastrous for our climate and it is ceasing to make financial sense,” said Todd Zimmer a lifelong Charlotte resident and organizer with Rainforest Action Network. “It’s past time Bank of America take a leadership role in transitioning this country to a clean, safe energy economy and that must start with a strong commitment to stop funding dirty and dangerous sources like coal.”