The One Thing Better Than Summer Skiing 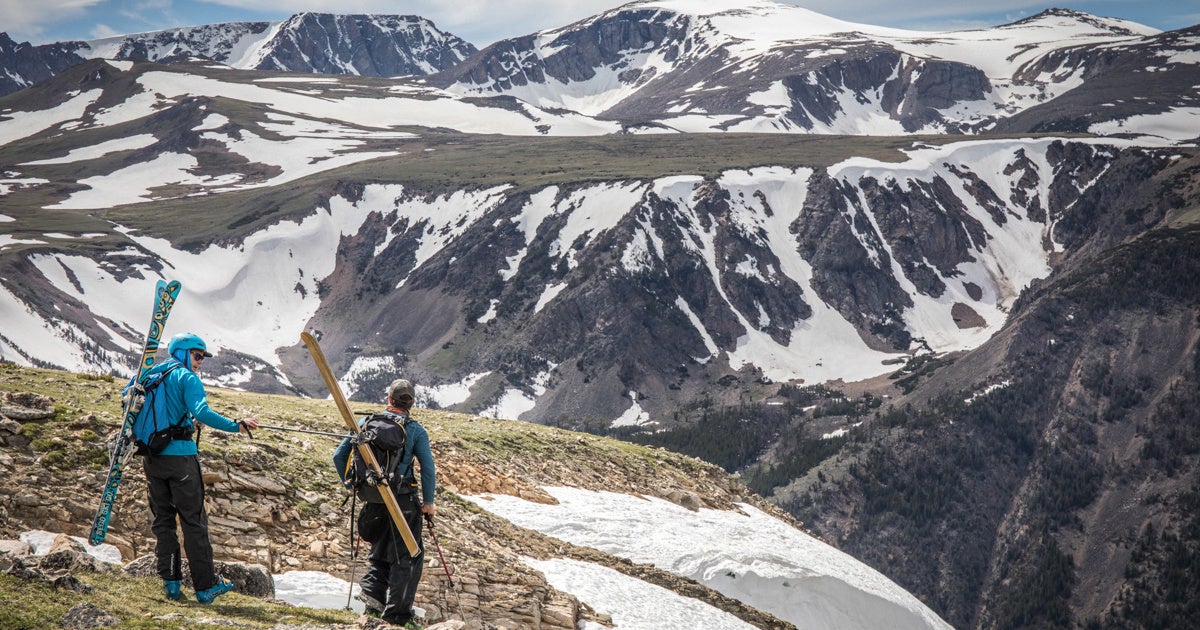 “There’s snow up here, I promise,” I assure my son Jonah, as we grunt up a south-facing mountainside in Glacier National Park in July. A mountain goat cocks its head as if to say, “What kind of crazy people hike up bare mountains in ski boots?” He’s not the only one to wonder what in the name of Bode Miller we’re doing up here with ski gear.

Our day began at Logan Pass, the high point of the park’s famed Going to the Sun Road, where plows work for months to carve a byway through walls of deep snow. By July that snow has melted into a predictable patchwork, and even on the highest summits the south slopes are bare. As Jonah and I set out from the parking area on skis, tourists raise their phones to take pictures of the spectacle while children from warmer climes throw snowballs. 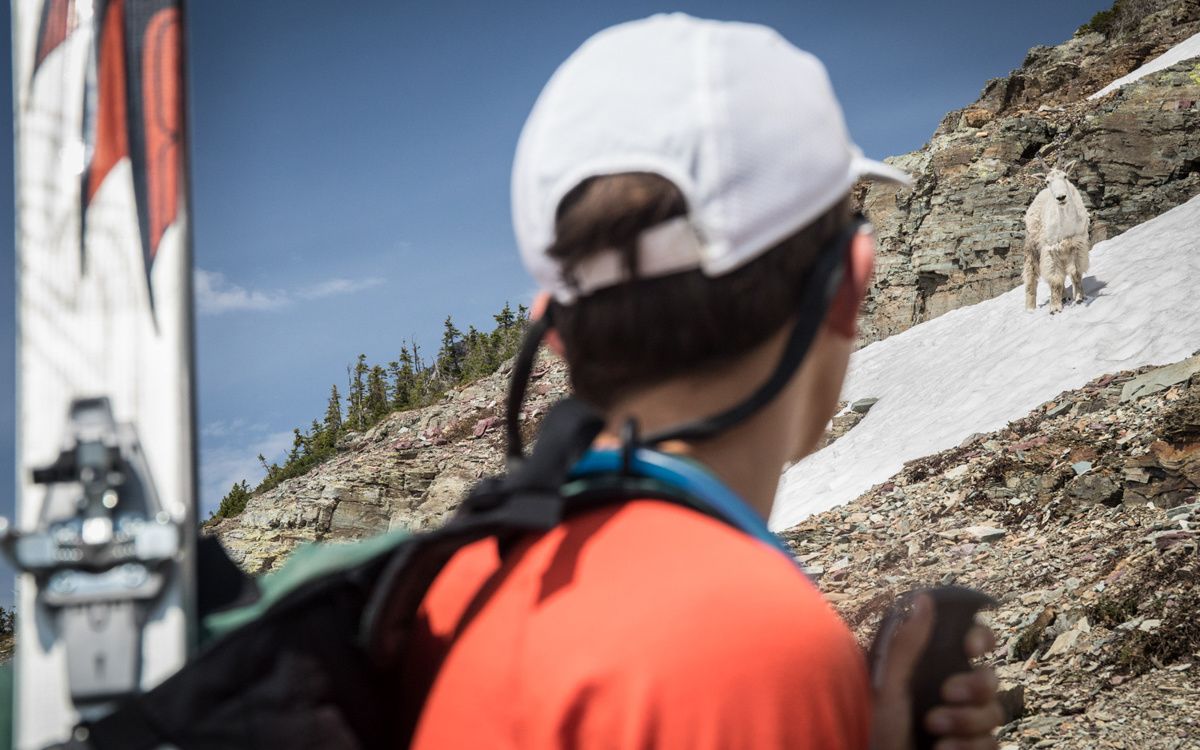 An hour later the crowds are far behind us as our snow patches run out and we arrive at the foot of a south-facing mountainside and remove our skis. A bare-chested man with a vigorous hiking stride looks up the daunting pitch above us. Our plan to ascend it, he opines, “sounds like a lot of work.”

Despite my confident response to Mr. Bare Chest, I’m secretly worried. There’s a fine line between passing on your love of the mountains to your kids and alienating them by pushing them too far. Jonah is 15 and a high school athlete. He can handle this. I hope.

But so far he’s a bit morose in that dispiriting way particular to teenagers, so I offer him the option of turning around and doing something easier in the tourist zone. To my pleasant surprise he opts for the bigger, much more challenging adventure. So we lash our skis to our packs, find one of Glacier’s many informal climber’s trails, and begin our climb into the world of mountain goats and summer snow. 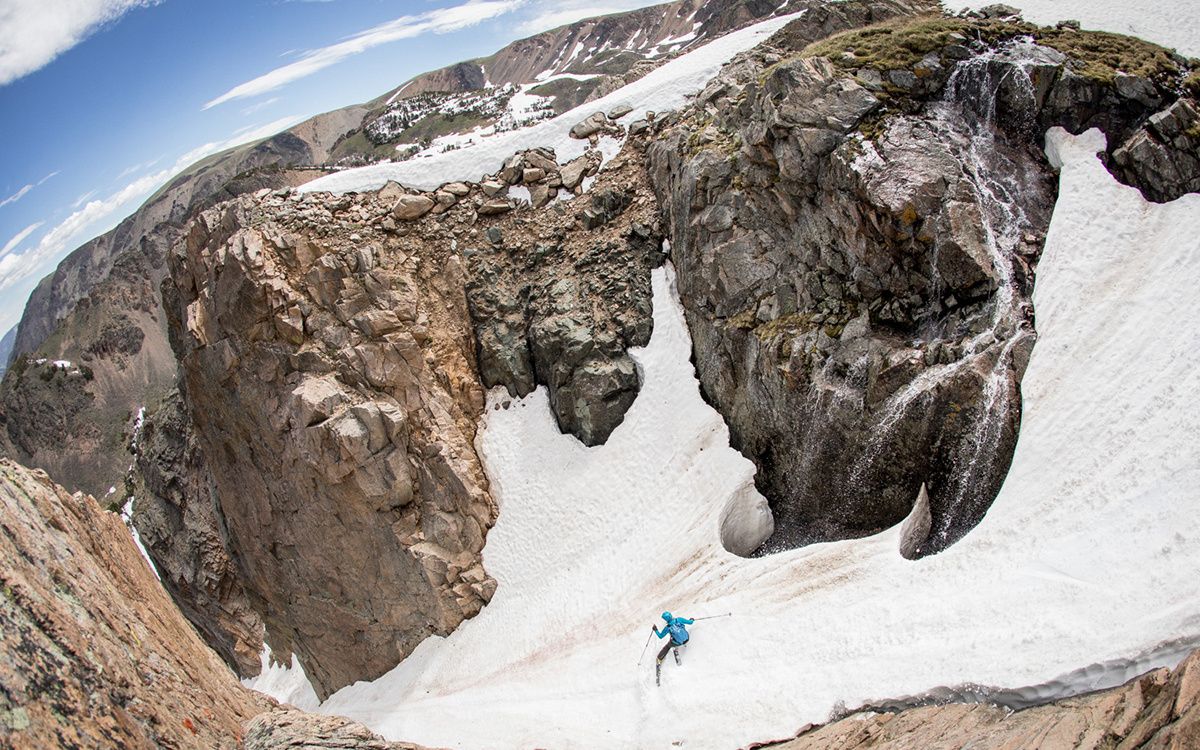 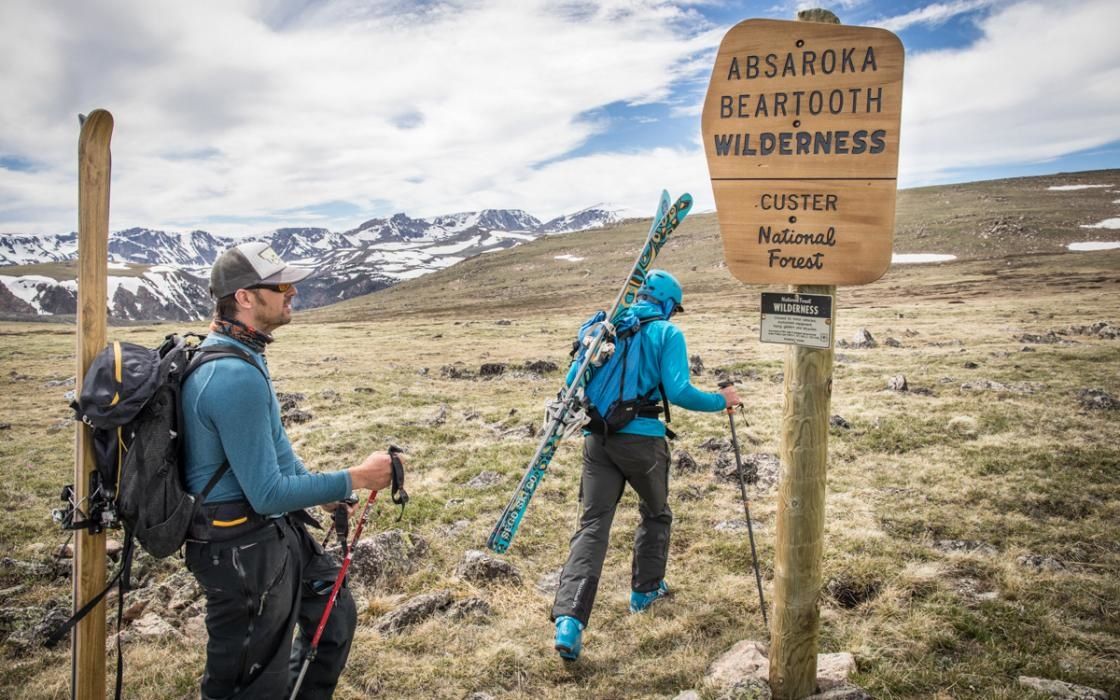 Hours later we gain a knife ridge at 8,000 feet. Sharp peaks laced with waterfalls spear the sky in every direction. The northern side of the mountain drops steeply into a sheltered alpine bowl harboring a thick snowpack. “Told ya we’d get to snow!” I exclaim to Jonah—who is focused on trying to communicate telepathically with the mountain goats lounging on the snowfield.

Below us stretches a beautiful, wild ski run of 1,000 vertical feet. Its high alpine fastness makes it virtually unreachable in winter, but its shady northern aspect in a sheltered cirque preserves it for a fine run in July. We strap on helmets and click into our skis. The slope is steep enough that only the beginning is visible before it plummets away out of sight.

I tell Jonah to follow my line closely, as there are rock bands, small crevasses and other hazards to avoid. After I take a couple turns to test the snow, which has an amenable surface perfectly softened by the day’s sun, I tell him to drop in behind me. He’s on my old skis, which are a bit long, but he carves his way down the mountainside like he’s been doing it all his life. Which is probably because he has.

His father is what you could call a skiing addict. Nothing mainlines joy for me like the wild poetry of gliding down snowy mountainsides, and I’ve tried to instill proper values in my two sons. If it snows more than six inches, abandoning school for a ski day is optional; more than 10 inches and it’s mandatory.

But it wasn’t until well into adulthood that I realized you needn’t put skis away when winter ends. It started with May. I figured out that even by that late date, snow sticks to high mountains and provides stable glissè opportunities on steep slopes that would be too perilous in avalanche-prone mid-winter. From there, it was only a matter of time until I found myself skiing in the first days of June, when most people are gardening. But making the jump to true summer skiing took a bit longer because, well, snow is harder to find in summer.

Then a friend who’s a backcountry skiing guide showed me the hidden side of Glacier’s Logan Pass and began inviting me on adventures into remote places that involved fording creeks with skis on our backs and other alpine shenanigans. As you might imagine, we were always the only people back there. Which was all I needed. Wilderness exploration with glorious ski runs far from madding crowds? Sold.

Soon I was exploring the Northern Rockies’ other hotbed of summer skiing, the Beartooth Mountains on the Wyoming-Montana border. I heard stories of people doing the same in the Cascades, Rocky Mountain National Park, and California’s Mount Shasta. Many of them are part of an ever-growing tribe of year-round skiers—calendar-obsessed souls who’ve vowed to ski at least once in every month of the year. I now have multiple friends who’ve been doing so for over 10 years. From them I’ve learned of the ever-more esoteric locales they use for August and September runs, shadowy creases and perennial snowfields hanging in alpine basins. I’m not quite there yet—I’m loathe to let things like calendars and clocks dictate my agenda. But I no longer think they’re crazy. Summer skiing, it seems now, is little more than a day hike in the mountains with a more elegant route back down.

Jonah is all smiles as we fill our water bladders from a snowmelt creek at the bottom of our first run. From there we have another big climb up a steep slope of loose rock. Again I’m worried it might break his effervescent spirit. But letting him choose our climbing route and lead the way imbues him with newfound energy. Although we’ve been clambering around for at least six hours, he moves up the rough terrain with enthusiasm and we chatter cheerfully without pause.

It’s a perfect example of what happens when you bring kids into the wilderness: Removed from civilization’s coddling hands, young people perk up, sensing they have only themselves and their companions to rely on. Give them responsibility and that sense of wild agency crystalizes and before you know it, you’ve got an adventurer on your hands. At least that’s what it felt like watching Jonah scramble up that mountainside as if the mountain goats had passed on to him some secret caprine wisdom.

We high-five at the top where the world opens up again. Logan Pass sprawls below us, tourists marching in a line like ants up the snow-covered boardwalk. There’s another long ski run at our feet and more tourists will stop and point and take pictures as we carve our way down it, marveling at the crazy people skiing in mid-July. I marvel, too, as I watch Jonah gleefully and even expertly soar down the mountain below me. It’s then that I realize that I’ve been wrong to think that nothing brings me joy like skiing. I now know that nothing brings me joy like watching my son ski a wild mountainside—and then plunging down behind him.