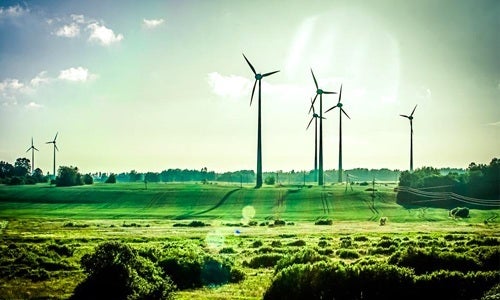 Costa Rica is well-known for its ambitious development of renewable energy, but neighboring country Nicaragua has been charging ahead on renewables, too. The country doesn’t produce its own oil and has historically been dependent on foreign imports. But the country is trying to change all of that by tapping into its natural resources—strong winds, bright sunshine and its 19 volcanoes.

Nicaraguan officials have set goals of 75 percent renewable energy by 2017 and 90 percent by 2020, ProNicaragua reported. An International Renewable Energy Agency (IRENA) report from January 2015 found that “Nicaragua’s renewable energy sector has a bright future, both for utility-scale and small-scale projects, due to the country’s largely untapped renewable resources.”

Javier Pentzke, manager of Amayo Wind Farm, told NPR his farm’s location on the shores of Lake Nicaragua is one of the top places in the world for wind energy. “You have all the opening here from the lake all the way to the Caribbean, so it’s like a tunnel,” he said. “And it’s very steady. It’s not too gusty.”

As of June 2015, renewables made up 54 percent of all electricity production and 80 percent of the country had reliable access to the grid.

Just 10 years ago, the 64 percent of Nicaraguans with grid access regularly lost power for 4 to 5 hours per day, and only 25 percent of electricity came from renewable sources. Even just a few years ago, 12-hour blackouts were still common. But that’s all starting to change.

When Daniel Ortega assumed the presidency in 2007, he made the bold decision to invest heavily in renewables. “During the 2006-2012 period, the Central American country attracted $1.5 million in investment in renewable energy,” ProNicaragua reported. “In 2012, Nicaragua invested the fifth highest percentage worldwide of its GDP in developing renewable energy, according to the Renewables 2014 Global Status Report.”

According to last year’s report from IRENA, from 2006 to 2012, 15 percent of Nicaragua’s electricity came from wind, 16 percent from geothermal, 12 percent from hydropower and 7 percent from biomass. ProNicaragua puts the latest wind estimates at 20 to 30 percent of total electricity generation. And the country has barely begun to tap into its solar potential.

This video from NowThis sums up Nicaragua’s energy revolution: