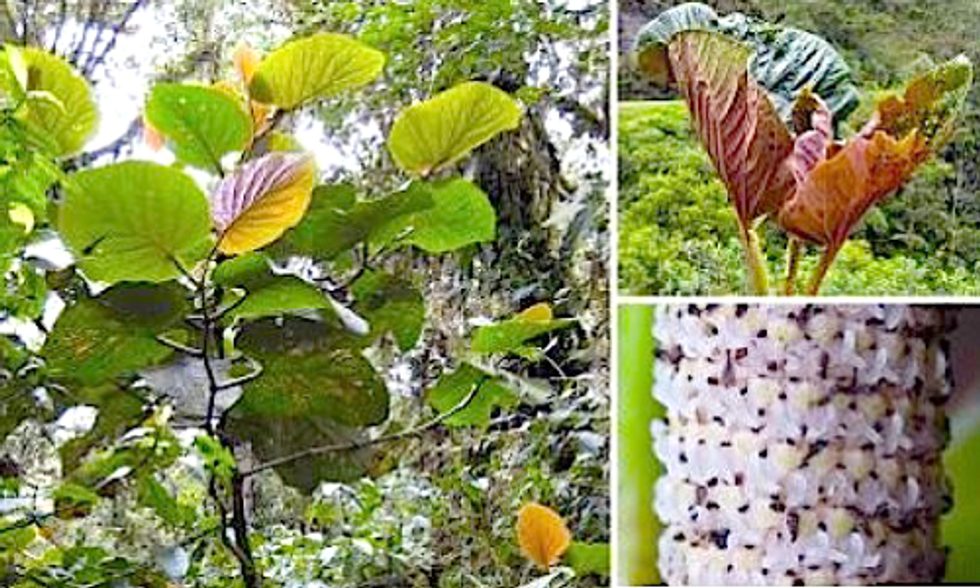 Researchers working in the Ecuadorian Andes have discovered a new species of black pepper plant that is a nexus of biodiversity.

The newly described species of wild black pepper, Piper kelleyi, in its native habitat (left). The pinkish undersides of the leaves (upper right) gave this species the nickname "pink belly" among members of the research team. The flowers (center right) and fruits (lower right) are not very showy, but the fruits do have some of black pepper's familiar pungency. Photo credit: E.J. Tepe; CC-BY 4.0

The plant, named Piper kelleyi, supports roughly 40 to 50 insect species, the scientists estimate, many of which are entirely dependent on the plant for survival. P.kelleyi produces chemical compounds that are known to deter most herbivores, but a single type of caterpillar has adapted to overcome the toxicity of the plant's defenses. That caterpillar, in turn, is preyed upon by species of wasps and flies dependent on that specific caterpillar species—and ultimately the plant—for survival.

Altogether, an assemblage of up to 50 species of herbivorous and predatory insects are dependent on P. kelleyi, the researchers report in the journal PhytoKeys.

Many of these insect species have never been studied, but researchers believe the toxic compounds produced by plants like P. kelleyi drive the evolution of new species of herbivorous and predatory insects.